Amidst Dwight Howard Scandal, WNBA Star Denies Allegations That She Is Straight

by Chris Najdek
in IT'S SATIRE, Sports Without Punching, The Other Half
0

As Dwight Howard silently deals with the onslaught of homosexual allegations after he was outed by a former transgender lover on Twitter, another basketball star is under fire for allegations of a heterosexual affair she’s been accused of.

A cis gendered, heterosexual male took to twitter yesterday to detail his sexual relationship with a WNBA star he would not name as of yet. He did however inform Halfguarded as to the identify of the player so we were able to contact her for comments. Due to legal and moral reasons we will not be revealing the players name until she is ready to come forward.

The twitter user, who’s handle is @dwighthowardlovesvaginaandbreasts said he had a torrid affair with the WNBA star and went into graphic detail:

“Yeah man, so me and this female woman had a lot of vaginal intercourse. I’d put my hard erect penis into her stimulated vagina and thrusted it around until I busted my nuts in her.” 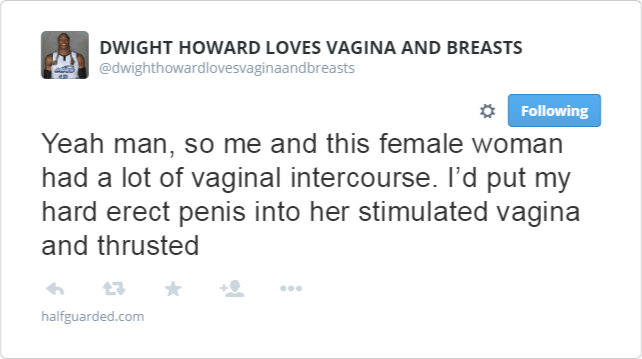 A string of tweets followed including these rather interesting ones:

“And then I squeezed her titty boobs and my straight heterosexual penis got so hard and throbbing because I’m not gay and neither is Dwight Howard!!! Man he must get so much poon tang! He’s such a manly heterosexual. I bet her never even let a thermometer in his butt when he was a baby. HE’S NOT GAY…”

“…plus if he was gay he definitely wouldn’t be a bottom. He’d be pounding that giant cock into dude’s tight, hot asses like the 8 time NBA All Star he is!!! So anyway, I was really going to town on this female player’s coochy coochy coo. I’m really good at sex with girls.”

When we reached the anonymous WNBA player for comment she had this to say:

“I can’t have people thinking I’m straight. I’m a WNBA star, I have merchandise to sell. This could ruin me. An openly straight player in this league? Whether I’m gay or not they need to think that I am. If I don’t walk around smelling like cocoa butter and canned cat food these bitches won’t buy my jersey for their adopted/surrogate kids.”