Poll: Do you hope there will be a Con Air 2?

Con Air 2 is the sequel to the surprise hit, Con Air, which debuted in 1997.  While it may seem odd at first glance for there to be a sequel to a movie 20 years later, just look at Independence Day for all you need to know about Hollywood going back to the mid-90s for film ideas.  Plus, until National Treasure 3 comes out, what else will Nicholas Cage do?

Con Air 2 will be released June 3rd, 2020.  People will be lining up for blocks just to buy a ticket, even though they could just as easily use an app.

The Plot of Con Air 2

Last film was simple enough: a former Army guy who killed a man to defend his wife is up for parole and hitches a ride with a bunch of crazy, evil, dangerous convicts.  Crazy stuff ensues and he ends up saving the day.  Oh, and while all this happens, the Con Air version of Hannible Lecter escapes and ends up winning a lot of money in Las Vegas.

For a sequel, there are only a few important details: Cage must star, because he’s The Man with these things, and THE ROCK must also star.  The Rock is nothing if not brilliant at reviving franchises.  He’s credited with saving GI Joe for instance and a bunch of other movies.  There’s no reason for him to not be involved.  He would pull off the same role as Cage occupied in the first film: reformed convict who is just trying to do right and see his family.  I mean, come on, that just SCREAMS for The Rock to play the role.  Sure, they change it up a bit, maybe throw in a bus instead of an airplane (like how Speed 2 replaced a bus with a boat – just not as stupid).

It would be a mash of Walking Tall and San Andreas.  The Rock can cry a bit, but not too much, deliver some trash talking lines, and kick ass. 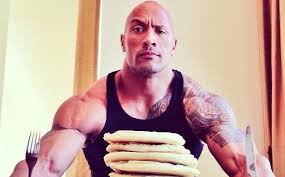 Meanwhile, Cage would take on the role of John Cusak.  He can be the guy on the outside, helping direct things along.  He’s called in by the Feds because they know he’s the only man who can do the job.  He’s reluctant at first but sees a fellow Reformed Man in The Rock.

Bring back some of the original cast, because it’s not like those evil bad dudes are gonna go anywhere in movie-time, and you’ve got a paint-by-numbers hit!

Simon West directed Con Air.  He’s since basically directed a slew of movies with the same level of sophistication: The Mechanic, The Expendables 2 (and randomly enough, Black Hawk Down)(wait, he was just a producer on that one, nevermind).  He’s perfect to come back and direct Con Air 2.  It’s not like he’s doing ANYTHING else of note.  Seriously.

Who will be in the cast of the Con Air sequel?

It’ll look like this, which is MAYBE us showing you the first movie’s trailers.  Maybe… 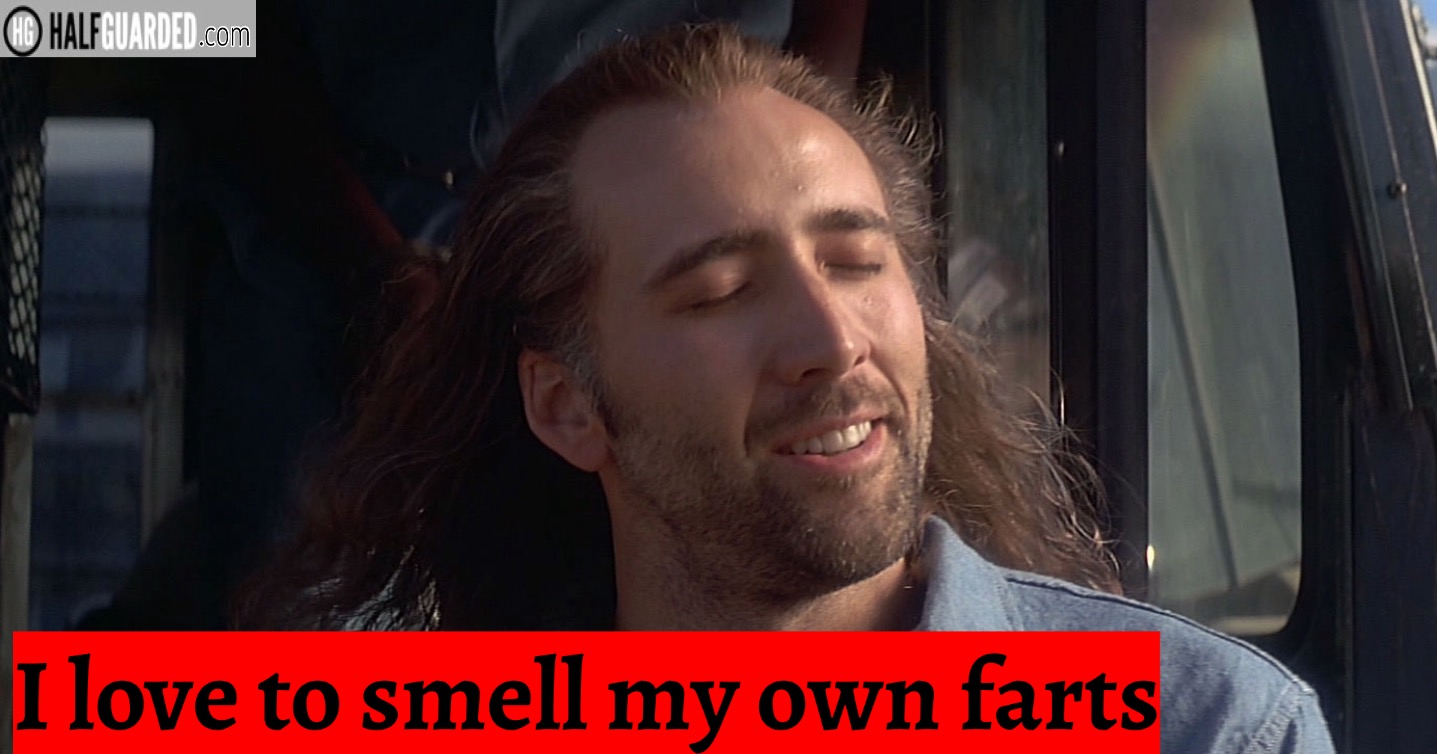 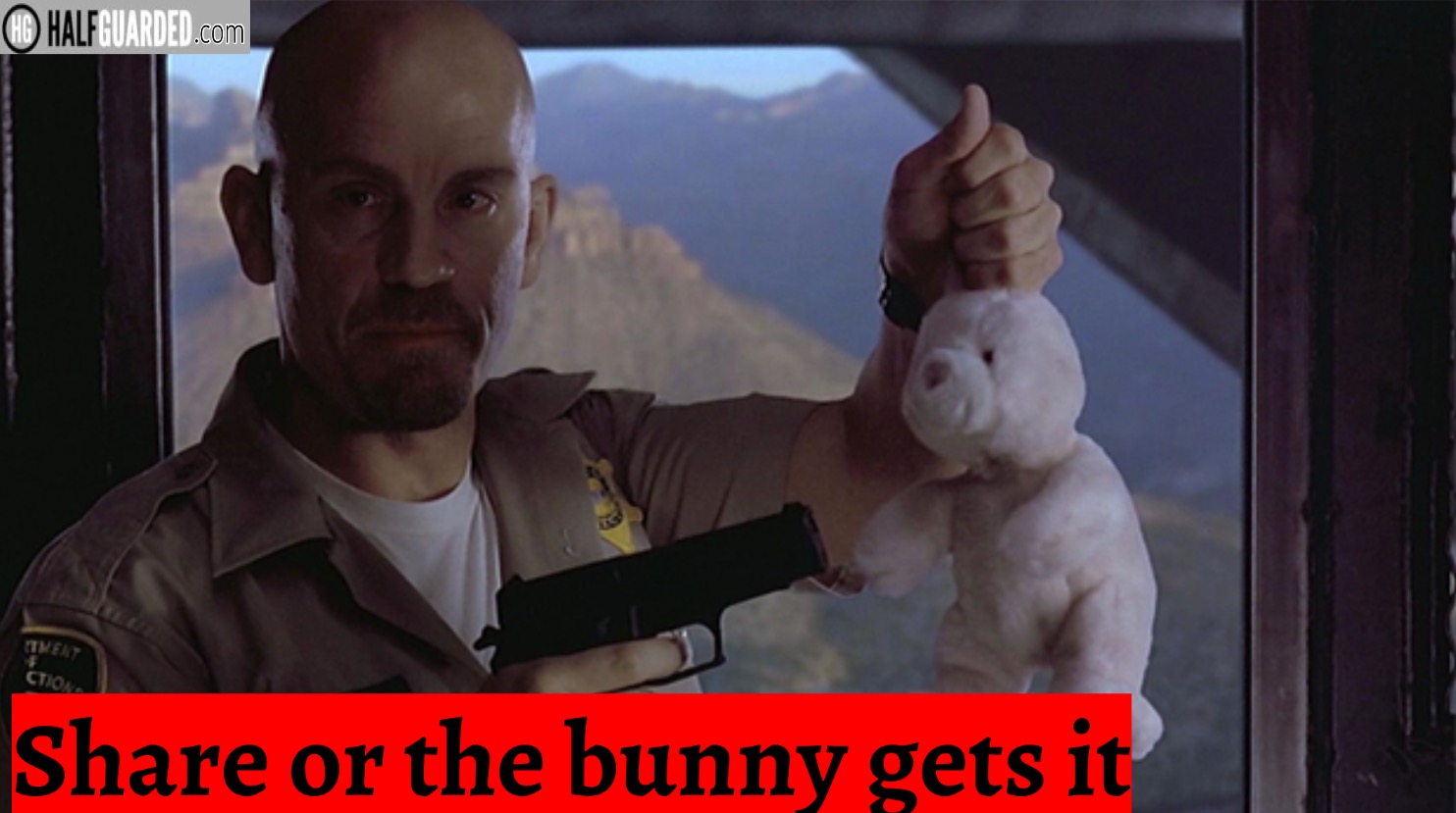 Who will write Con Air 2?

The Rock.  The Rock will own and be the greatest actor ever in a Con Air film.  He’ll just stand there and say, “Do I smell something cooking?” before smacking someone with a frying pan.

I know people will say Cage, because he’s kinda crazy, but that crazy is what makes him work.  BEEEES!!!!!!!

The first film made a TON of money.  It tripled its budget of $75m bringing in well over $200m.  With inflation, that’s approximately $750m in today’s dollars.  I see Con Air 2 with a box office success of $400m on a $150m script.  Oh, and they’ll also film a bunch of it in Hong Kong so they nail the Chinese market for an additional $200m.

Will Con Air 2 Be Worth Seeing?

Of course.  Have you ever seen a BAD movie with The Rock?  Dude makes everything awesome.

Will there be a Con Air 2 Online Release?

Yup.  Con Air 2 will be on Netflix, HBO Go, Hulu, and Amazon.  Unfortunately.

Cage and The Rock delivering one-liners while they fly a jet from Hong Kong to Tokyo to San Diego is pure gold.  It must happen.