Another day, another bit of drama involving everyone’s favorite Irishman.  Last night, Conor McGregor sends out a tweet saying he’s back and thanks to Dana for making it happen.  Look, here it is: 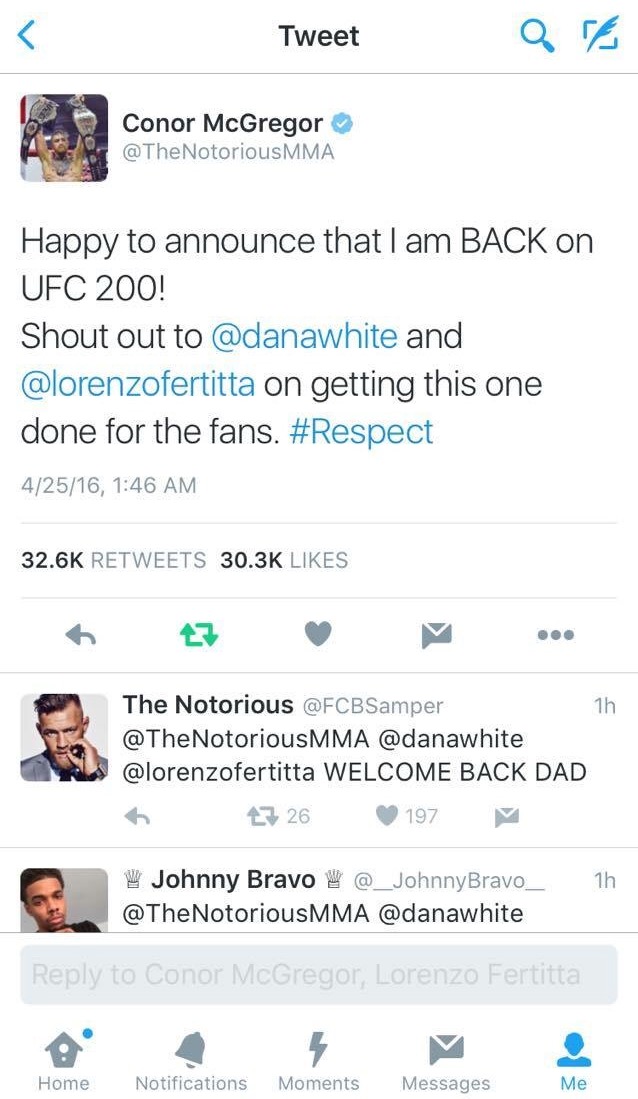 But, it’s not true.  People did what they do when they hear this kinda news and simply ask Dana what’s up.  He flat out says it’s not true.  He said this to more than one (lesser than us of course) outlet.

This is becoming transparent.  Conor tried to basically force the UFC’s hand.  He figured if he made it sound like a deal had been done that the UFC would have to get said deal done.  He misread Dana White, methinks.

If he’d tweeted that he was going to be back at UFC 200 without consulting the UFC but did so because he’d made the decision to do the media stuff, so be it.  The direct inclusion of Dana and Co. in said tweet though was the misstep.  McGregor called their bluff and found out they were holding pocket aces.

Maybe one and all side with McGregor on these things, that’s fine.  Some are fans of his and want to see him no matter what, some are people always looking for a reason to hate on Dana White, that’s fine.  But it doesn’t matter, really.

The UFC is not a public company and it isn’t a business that’s been granted immunity from antitrust laws, ala baseball, so how the UFC runs things is 100% their call.  And they made the calculation that the press tour stuff was important enough to call off the fight.  More than that, they made the decision to not bend.  In their estimation, they didn’t want to set a precedent that others would try to follow.

Maybe in a few days, everything changes again and McGregor is back on the card.  All the drama will only make people more money.  But it will be on the UFC’s terms.  Come July, the UFC is going to be cashing checks worth millions – will Conor?