President Trump continued his attack on the US Post Office and mail in voting but banning children and adults from sending letters to Santa via postal mail. The president said that the system of mailing a letter to Santa has been ripe with fraud for hundreds of years and he will put a stop to it.

Apparently President Trump is tired or being on the naughty list. He feels it’s unfair and Santa is singling him out because Santa is a socialist.

As always, he took to twitter to vent his frustrations:

“CHRISTMAS FRAUD! The only way me and suburban mothers won’t get what we want for Christmas is if Sleepy Joe and Phony Carmelo Harris get their way and RIG SANTA’S NAUGHTY OR NICE LIST! I will get my Easy Bake Oven! It makes real brownies and cookies!” 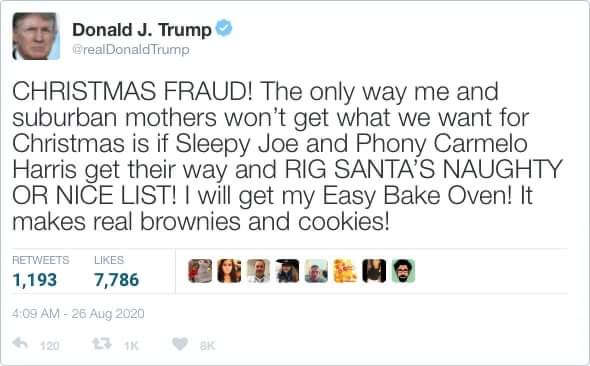 Later on, at a press conference, Trump continued his rant and elaborated:

“It’s sad because Santa is now a radical left socialist the likes of which we haven’t seen before. Maybe more so than Bernie Sanders. He wants free toys for every girl and boy! Our tax dollars pay for those toys. Santa also wants to end the suburbs and single family homes because he’s lazy. It’s easier for him to use the elevator in low income apartment buildings and hit like 100 houses in one shot. He hasn’t given me any toys my entire life because these mail in letters are fraud. He never gets mine, why do you think that is? Then post office doesn’t let my letters get to Santa! If I can eliminate mail in letters he will see the REAL naughty and nice list and give me my toys and stop giving them to the radical left for free! I’m the only man that can fix this. If I can make Melania a citizen, I can make Santa a republican! Letters to Santa are now banned!”