A few weeks back on MMA & STUFF, I thought Anderson Silva had beaten Lorenz Larkin back in February.  Turns out, I had the wrong black dude getting beaten up by another black dude.  Oops.

Larkin, as Matt Grady, genius at large, informed me, was a free agent.  The drama built from there: would the UFC be able to hold on to a guy who was 1-4 as a middleweight but had turned things around, finding himself now 4-1 as a welterweight?  Turns out, they couldn’t.

Larkin signed with Bellator, following in the footsteps of Ryan Bader and a number of other ex-UFC fighters.

Bellator was making its own moves, outside of signing the world-famous Larkin, as they were setting up their first PPV (I think it’s the first) and for sure their first appearance at Madison Square Garden.  Given that the UFC gave the world one of the most legendary shows in MMA history when they made their MSG debut, the pressure is on Bellator to follow suit. 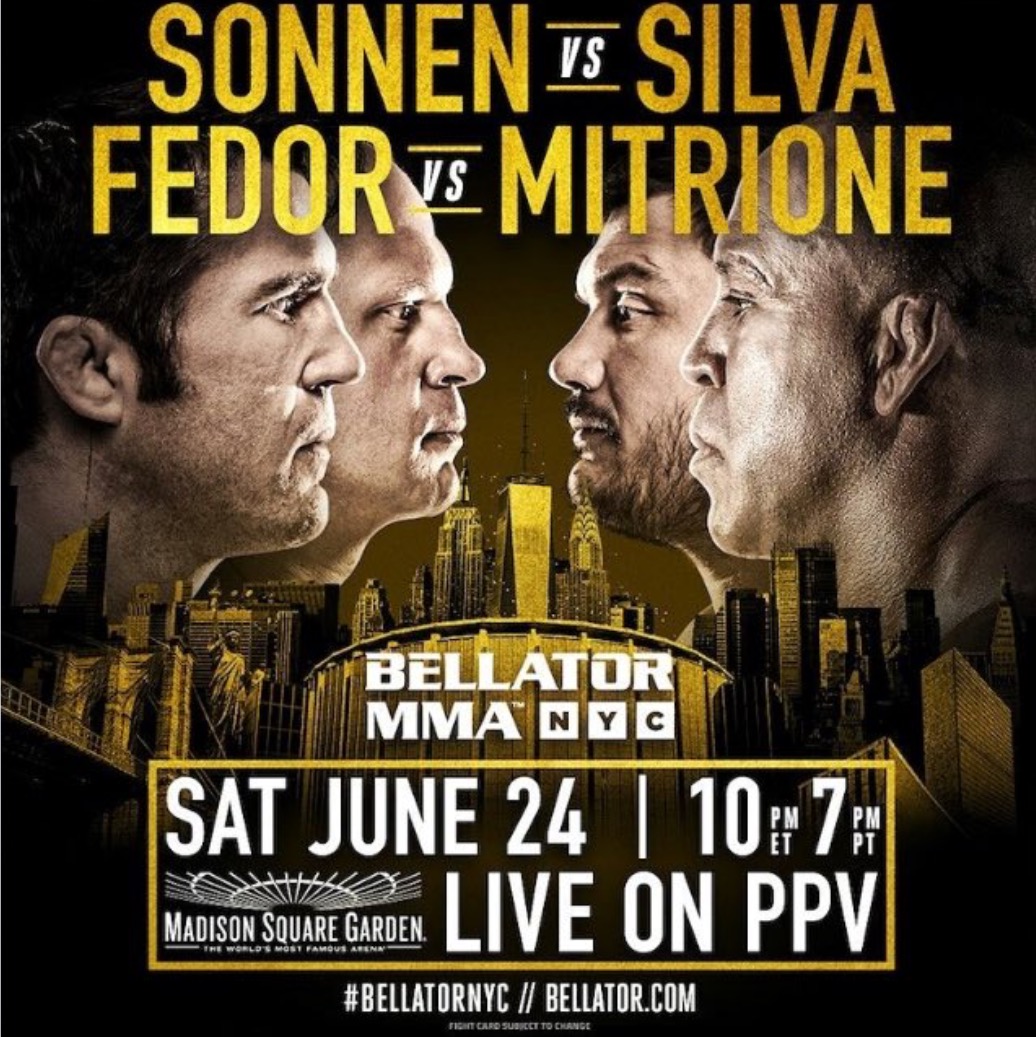 Previously, word was out that Chael Sonnen would fight Wanderlei Silva and Fedor Emelianenko (nailed it on the first try) would square off with Matt Mitrione.  Now, two title fights are announced.

Current Bellator lightweight champion, Michael Chandler, will defend his belt against Brent Primus – whoever that is.  Additionally, Larkin will challenge Douglas Lima for the welterweight strap.

So, as of now, the Bellator MSG card looks as follows:

I’d expect one more fight to be added to the show.  Considering all they have as a promotion, Bellator has done the best they could to produce a card worth buying.  It’ll be interesting to see if anyone DOES buy it but it won’t be for lack of trying.

LOS ANGELES – Bellator MMA is bringing its biggest event ever to the “Big Apple!”

Madison Square Garden, “The World’s Most Famous Arena” and Mecca of combat sports, will host Bellator’s first-ever mixed martial arts event in the state of New York on Saturday, June 24 with Bellator NYC: Sonnen vs. Silva. The blockbuster pay-per-view features two of the sport’s most recognizable names in Chael Sonnen (29-15-1) and Wanderlei Silva (35-12-1, 1 NC), who will finally meet in a light heavyweight fight that has been brewing since 2011.

The double main event also features Fedor Emelianenko (36-4, 1 NC), an MMA legend that many consider to be the greatest heavyweight fighter of all-time, taking on Matt Mitrione (11-5) in a bout that will undoubtedly produce fireworks between the heavy-handed strikers.

“As a fight promoter, my goal is to put together the biggest cards possible for our fans around the world,” Bellator President Scott Coker said. “Bringing an event of this magnitude to a city and arena like New York and Madison Square Garden has been something Bellator, Spike and Viacom have wanted to make happen for quite some time. On June 24, the goal becomes reality, when we put on the biggest event in promotional history, Bellator NYC.”

Bellator NYC: Sonnen vs. Silva takes place Saturday, June 24 and airs LIVE on pay-per-view beginning at 10 p.m. ET/7 p.m. PT. Prior to the pay-per-view event, SPIKE will air Bellator 180 LIVE and FREE on both coasts, beginning at 8 p.m. ET/5 p.m. PT. Additionally, Bellator 180 prelims will air exclusively on Bellator.com and the Bellator Mobile App at 6 p.m. ET/ 3 p.m. PT. Additional contests will be announced in the coming days.

Tickets for the event starting at $60, not including applicable service charges and taxes, go on sale Friday, March 31 at Ticketmaster, TheGarden.com and Bellator.com. Fans can sign up for Bellator Nation here to participate in a presale that will take place Wednesday, March 29-Thursday, March 30.

Bellator NYC: Sonnen vs. Silva will be distributed by G&G Closed Circuit Events to bars, restaurants and other commercial establishments throughout the U.S. and Canada. G&G Events is a leading provider of closed circuit television and has distributed some of the biggest events in sports, including De La Hoya vs. Mayweather, Mayweather vs. “Canelo” Alvarez and Mayweather vs. Pacquiao, as well as Bellator 120: Rampage vs. King Mo. “G&G is thrilled about Bellator being back in the pay-per-view business with this tremendous event. We look forward to handling the distribution nationwide and for Canada,” said G&G President Nicolas Gagliardi. G&G Events can be contacted at ggccevents.com or by phone at (888) 258-7115.

Additionally, through Bellator’s global distribution partners, Bellator NYC: Sonnen vs. Silva will be available in over 140 countries around the world.

Sonnen spent a majority of his 44-fight career with the UFC, a run that saw him defeat current middleweight champion Michael Bisping, and compete against the likes of Jon Jones, Anderson Silva (twice), Rashad Evans, “Shogun” Rua, Demian Maia and Brian Stann. In addition to his in-ring action, the West Linn, Ore. native has mastered the art of being in front of the camera, doing broadcast work for both ESPN and Fox Sports. Following a three-year hiatus from active MMA competition, Sonnen returned to the cage against Tito Ortiz at Bellator 170 in January.

“The Axe Murderer” has fought in some of the most memorable feuds and battles the sport has ever seen. His wars with “Rampage” Jackson, Tito Ortiz, Mirko Cro Cop, Vitor Belfort, Dan Henderson, Kazushi Sakuraba, Chuck Liddell and Michael Bisping remain some of the more memorable bouts in MMA history. Silva is far from ready to close the book on his illustrious career, returning to action against a man that he has despised for quite some time. In addition to the PRIDE middleweight title, Silva’s trophy case includes awards for “Fight of the Year” (2003, 2004, 2007), KO of the Year (2008) and multiple “Fight of the Night” awards, including one for each of his last three fights. He now looks to continue entertaining fans inside the Bellator cage and begins with a bout several years in the making.

A former PRIDE champion, “The Last Emperor” is one of the most revered and respected heavyweight fighters the sport has seen. Stone-faced and quiet, Emelianenko boasted one of the most impressive unbeaten streaks in the history of MMA, not losing a bout between 2001 and 2009. A multi-time world champion in MMA and Sambo, Fedor recently returned to the sport after a brief hiatus, accumulating two decisive wins since his return to action.

Matt Mitrione remains poised to make an Impact in the Bellator heavyweight division following two emphatic wins since signing with Bellator in 2016. The Illinois native and standout defensive end at Purdue University earned All-Big Ten honors in 2000 and subsequently earned his way into the NFL where he played six seasons as a member of the New York Giants and Minnesota Vikings. Mitrione ultimately found his way into MMA where he became a high-level competitor, defeating the likes of the late Kimbo Slice, Derrick Lewis and Gabriel Gonzaga.

Hailing from Atlanta, Ga. Douglas “The Phenom” Lima has been ruling the roost at 170-pounds in Bellator for the better part of three years. A winner of 16 of his last 18 contests, the American Top Team product remains set on doing away with all viable contenders at welterweight and his first step since reclaiming the strap from Andrey Koreshkov comes against one of Bellator’s newest signees, Lorenz Larkin.

Set to enter the Bellator fray is a “Monsoon” of violent proportions – unanimously ranked on lists compiling the top-ten welterweights on the planet, Larkin is set to continue his career in Bellator, after inking an exclusive, multi-fight contract last week. A known finisher, the pride of Riverside, Calif. will make his promotional debut a winner of four out of five.

Chandler will look to defend his belt for the first time since successfully defending it in a “Fight of the Year” candidate against Benson Henderson last November. A 16-fight veteran of Bellator MMA, Chandler has consistently proven that he belongs among the world’s elite, riding into his bout on June 24 on a streak of four straight victories.

Also a native of Oregon, the surging Primus remains unbeaten after five consecutive wins to begin his Bellator MMA career. At only 31, Primus has been committed to honing his craft since he was 13, going as far as to sell his landscaping business to keep his hopes of someday becoming a champion alive. On June 24, he finally has the opportunity to make his dreams come to fruition.

PH 47: The Doom of ACC Basketball! The Boys Get Ranty About Bill Simmons and Ian Kinsler!