The Time I Fought a Monkey in Hong Kong

I had to punch a monkey.

I was 22 years old and was in a predicament. At the time, I was dating my college girlfriend who was from Hong Kong; anyone dumb enough to have listened to my podcast for long enough will remember “The Konger.”  It’s been well over a decade since she was ever on, but people will still tell me they remembered the time I’d given up swearing for Lent but because I’d correctly made a pick for an MMA fight – in the face of mocking adversity and doubting fools who thought Nick Diaz could never beat Takanori Gomi – that the only way I could celebrate was by cussing, so I had her read a torrent of Fuck You, Doubters and Suck My Dick, Assholes.

She really was quite nice, much nicer than I would eventually deserve.  Not that I was a bad person, necessarily, but I’ve since grown into a bit of a jerk.  She’s now working on her PhD and I sleep on a cot with two dogs, one of whom waters the sheets every other day because he misses me.  She definitely dodged a bullet.

As she was returning to visit her family for the holidays, I had the opportunity to join her. I had my first “big boy job” and thus money to spend. I’d never had money to spend and a trip to Hong Kong sounded awesome. I was in. My mother still thinks it’s impressive that I’m comfortable enough to travel around the world just because. I don’t really think about it, I just go. The more I think something through, the less likely I am to actually do it.

Then I did something stupid.

One of the problems with my podcast is that I rarely know what I’m saying. I basically black out, go into a weird trance, talk non-stop for hours, and come to, facing a bunch of people asking me what I meant about X,Y, or Z, and I’m sitting there with no idea what I actually said. This manifested itself before I went to Hong Kong. Unfortunately.

For reasons known only to my subconscious, mid-show I started talking about how I should raise money for my trip. What’s the point of people listening or reading you if you can’t bilk them out of money, right? I promised anyone who sent money that I’d send them a postcard and, as a throwaway, I would punch a monkey. Yes, a monkey.

This time, I should’ve probably maybe possibly thought things through for once. 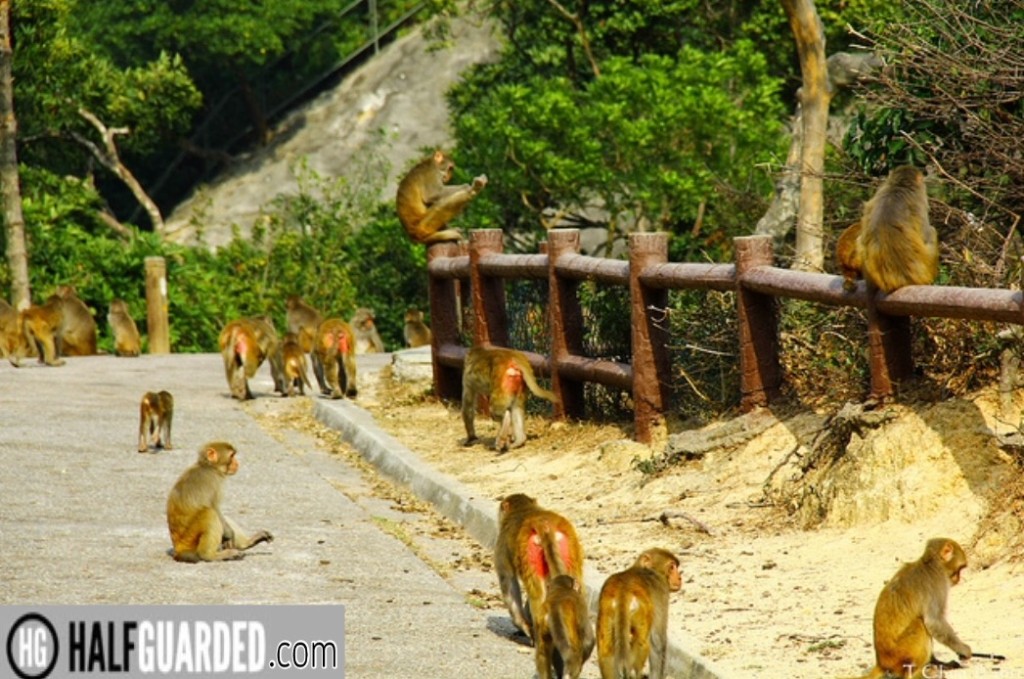 Hemingway referred to Paris as a moveable feast.  My description of Hong Kong is, “it is really cool.” If you’re a Gweilo – the Konger term for white person, which sorta means “ghost” and is kinda racist but since I am a white devil, I’m not one to complain – you should go. It’s probably the perfect Asian city for a Westerner to visit. Being a former British colony, every sign is in English, all of the people speak English, there is enough Western food and feel to things that you aren’t totally alone, but it’s still obviously Asian. You can eat fried balls of fish sold by a street vendor who set up shop right next to a Krispy Crème donut.

I won’t lie, I was a freak show to people. I stayed with her family and so I wasn’t in the traditional areas where white people are found. For the first time in my life, I was the tall one on the train, the MTR, the pride of Hong Kong, a quiet, smooth subway, one cleaner than most Chicago courtrooms. Wherever I went, I was an anomaly. Little children would literally stop, stare, and point me out to their parents, like I was an escaped Panda. If only I was a Panda, that would’ve made what came next easier. Even though HK is a massive, sprawling metropolis of steel and glass, it also has some nice, somewhat green, areas. One such oasis was Monkey Hill.

Monkey Hill is what it sounds like: it’s a protected local wildlife area famous for having wild monkeys everywhere. They roam free, no protective barrier or anything, coming right up to people. Tourists love it because how many times do you see monkeys that aren’t in a zoo? When I heard about Monkey Hill, I knew I had to visit. And somewhere in the midst of a two-hour long stream of consciousness it became, “Oh, and while I’m there, punch one of the monkeys.”

I say lots of dumb things, practically every day, to the point where it’s an art form. Surely, no one would actually send me money, right? Yeah, you know what happened next. People started to PayPal me money. No one sent me any egregious amount but over a few weeks the pot grew. More people sent money. And then more. Soon, it was nearly $500.

I was in trouble. I sure as hell wasn’t going to return the money, because even though I had a job, $500 is still $500. But what the hell was I going to do? I’d made a promise to people. I guess I could’ve lied and said I did and moved on, but I hadn’t yet thrown away all my integrity. Fine, the real reason was it sounded like it might be kinda funny.

So I get to Hong Kong, immediately send out post cards, and await my visit to Monkey Hill. It haunted me, this damn Monkey Punching Promise; my personal Sword of Damocles. I would eat fantastic local food, the kind tourists don’t get, that’s from a hole in the wall (an actual, literal hole in the wall sometimes) and images of monkeys would flood my thoughts. I would wander through street markets, looking at the souvenirs and knickknacks and crap and Curious George was there instead. Then one day it was time: I was going to Monkey Hill. 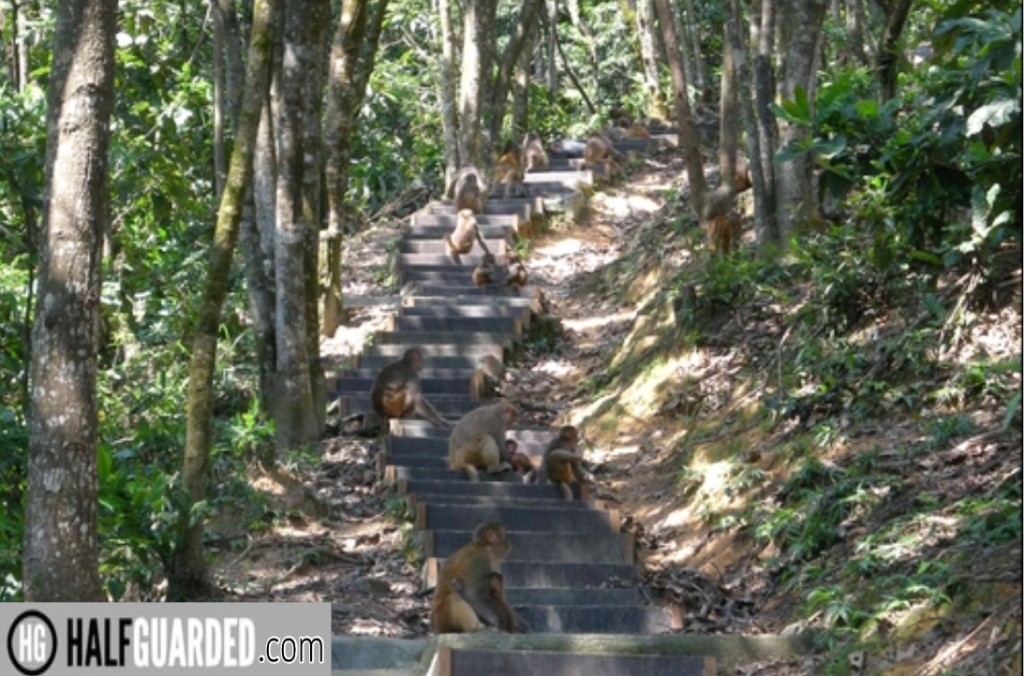 We arrive and it’s nice. A little mountainous, tons of green, totally inapposite of Hong Kong, somewhere that people who like to hike probably would love to hike. Not me. I was there to see a monkey. And punch it.

After walking for a while, we reach the area where I’m told the monkeys were located. I saw signs everywhere that implored us idiot tourists to not feed the monkeys; to be cautious of monkeys stealing your food; and to keep a lid on the garbage lest said monkeys get into it. (My knowledge of monkeys being limited to cartoons and zoos, I was surprised to learn that monkeys could open the garbage, which is why it had a lock on it.)

Then I see the monkeys.

I had assumed, like all things in life, Monkey Hill was a slight exaggeration and that there would be a monkey here and there; a glorified zoo, really. Oh, how I was wrong. I don’t know what a giant group of monkeys is called but this was one: a murder of monkeys. They were EVERYWHERE. What I thought would be one or two was 50 or 60. Hopping on trees, swinging from branches, running around the ground at my feet, just a swarm of monkeys staring at me and every move I made. 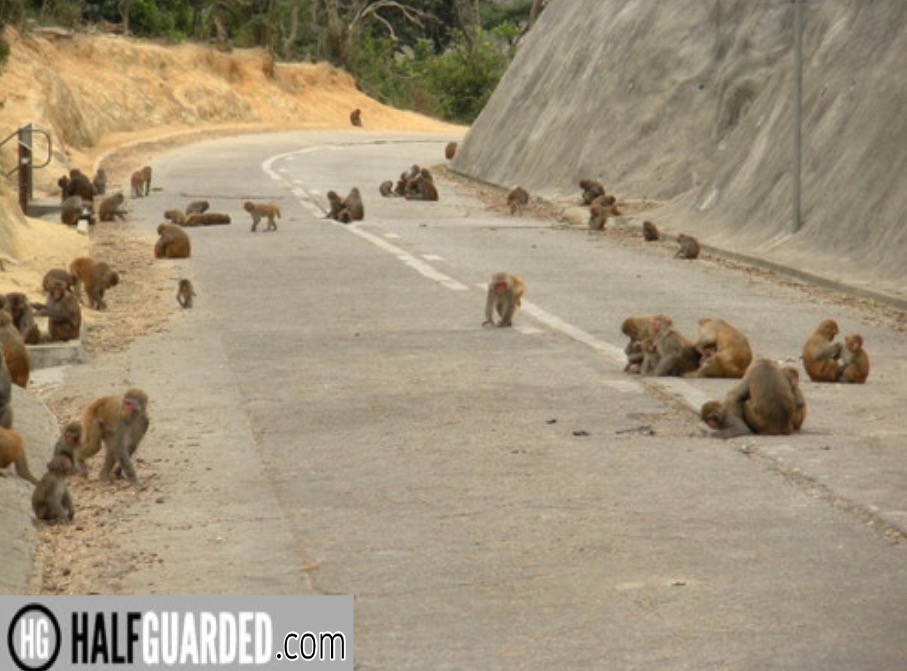 There was no way in hell I was going to punch a monkey now. None. I could envision it clearly, one punched monkey would result in them all attacking me. The papers would headline, “Stupid American killed by monkeys at Monkey Hill.” My family, well, they wouldn’t be surprised by the way I’d died but they be ashamed, I’m sure.

“Fighting in a war?”

“No. The dumbass punched a monkey and then was eaten alive for his troubles.”

For a good ten minutes I walked around, impressed on the one hand at being that close to wild animals, and terrified that they were more intelligent than I thought and were plotting to get me. Of course they were plotting, they’re animals. All animals do is plot ways to get things from people, I’ve got two dogs, I know these things.

I’d made a promise though, dammit. Plus, I’d happily spent the money already, which I regretted because I was absolutely ready to return it all at that moment. All around me was a tornado of monkeys and I had no idea what to do until I saw him: my victim.

Off on his own, perched atop a railing, sat a lone monkey. His back to me, nibbling on a banana or something like a banana – c’mon, it’s a monkey, what else is it going to eat? Below him was a massive gorge and behind him: me. He was a good ten feet from the other monkeys and I figured I could punch him and run before the other monkeys heard his cries and reacted. I could do this. Besides, he was a monkey, he’d be ok, right? He’d just grab a branch of something during his fall. Total win-win. 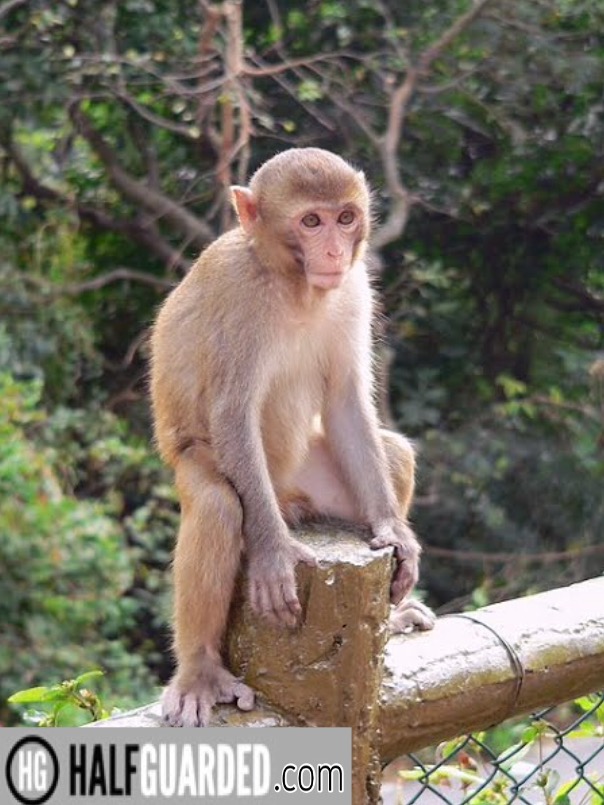 I lined up behind him, squaring up like a kicker in football, ready to punt him into the ether. (I decided to kick him rather than punch because it would decrease the risk of disease and I figured kicking a monkey would satisfy my obligation.) I looked around, saw the other monkeys preoccupied with who knows what, and slowly began my approach.

Step. Another. Then another. I built momentum and in that moment I know – I KNOW – that this will work. This little bastard will join every other monkey ever shot into space. I plant my left foot, ready my right, and just as I’m about to swing forward, forever etching my name into the history books as a hero, he turns around, raises his arms, and screeches.

It was what banshees sound like. It was the cry of a thousand years of warriors. It was the scream that had been honed to intimidate and warn others. Mouth open, eyes wide, it stared at me and pierced my ears and soul while gaining the attention of his friends.

It was too late though; I’d started. My previously built momentum had taken over, no matter what I wanted to do, the laws of physics governed now. All I could do was shift, try to avoid him, and so I did: into a pratfall. I was Charlie Brown and the monkey was Lucy.

All I saw now was the sky. All I felt was the surge of adrenaline telling me to run as fast as I could because not only had I failed, I’d alerted the great mass of monkeys to my ill intentions. I don’t know monkey protocol when one of their own is the victim of an attempt assault but I suspect it wouldn’t conform to modern standards of due process.

A blur followed. I ran with speed reserved for Olympians, my heart pounding so hard it cartoonishly left my chest, and by the time I’d stopped I was out of breath but alive: no monkeys were near. Veni. Vidi. Perii.

I fought a monkey and the monkey won: I tip my hat.

Monkey Hill monkeys have a life expectancy of around 20 years. Somewhere out there he sits in a tree, the victor, telling his monkey friends about the time he bested a White Devil. To him I say: you were the better primate that day, my friend.

Until we meet again.

Comedy Suplex Podcart 108: Indy Wrestlers Marking Out; Plus The Ionosphere

Comedy Suplex Podcart 108: Indy Wrestlers Marking Out; Plus The Ionosphere