Fast paced, nonstop wrestling matches with marvellous moves and dramatic near falls will stay with wrestling fans all the way to next week’s show. A wrestling match that connects with a wrestling fan and makes them feel it in their heart, will that will last a lifetime.

The atmosphere is unique for a pro wrestling crowd. Nowhere outside of Japan (and rarely even there) will the roar of the audience be so heavy with the unmistakable screams of teenage girls. This is All Japan’s Women’s Pro Wrestling in August of 1985. It’s a promotion which is on fire, enjoying incredibly strong television ratings and producing a fast paced style of hard hitting wrestling that will impress hardcore tape traders around the world, some of who will proclaim it as one of the greatest in ring eras of any promotion.

In it’s own country AJW is marketed specifically to appeal to teenage girls. It builds itself around pretty athletic wrestlers with a touch of the tomboy about them, stars the teenagers in the audience can relate to, especially when it comes to the tag teams which are based around the idea of a bond of sisterhood, loyal best friends. It’s a tradition started by the Beauty Pair in the 70’s and in 1985 the top team that have entered the hearts of the audience are the Crush Girls Chigusa Nagayo and Lioness Asuka. 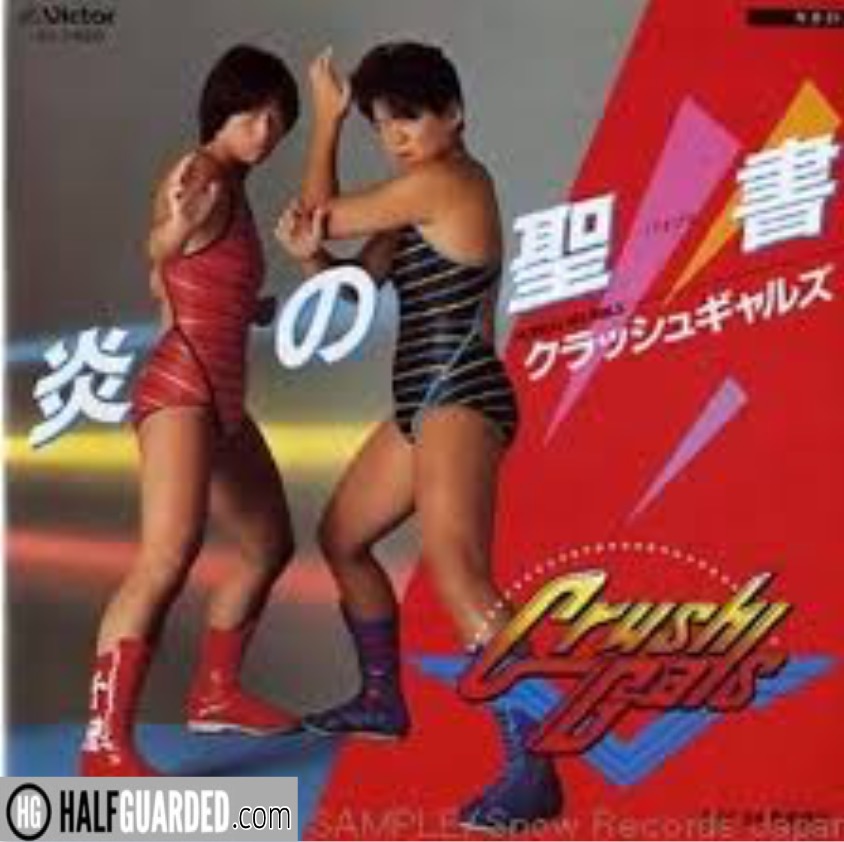 There is no team in wrestling idolised more than the Crush Girls, their rabid pop star adulation is has grown to near hysteria on this night as Chigusa makes her entrance, the crowd chanting “Chi-Gu-Sa” in rhythm with the beats of her theme music. Chigusa is accompanied to the ring by a team of her fellow babyfaces, Lioness and Devil Masami most prominent, all of the them fresh faced and clean cut. 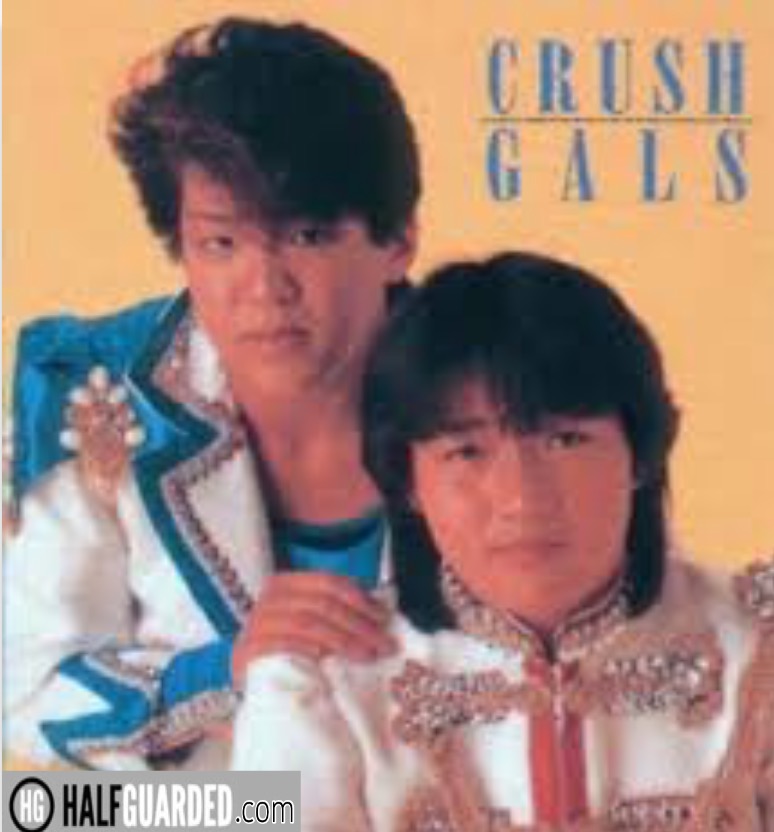 Monsters to the left and right but Matsumoto everywhere

The contrast with the opposing faction already in the ring is frightening. The banner the gang is carrying proclaims them as “Gokuaku Domei” the Atrocious Alliance, a mixture of punks and greasers, clad in leather and make up daubed so fiercely it’s on the verge of being warpaint, they’re an imposing sight. The scowling faces of the groups mainstays, Bull Nakano, Condor Saito and and Crane Yu represent the high school bullies and ultimate nightmare for the young girls in the audience. But none are more fearsome than their leader the psychotic Dump Matsumoto. 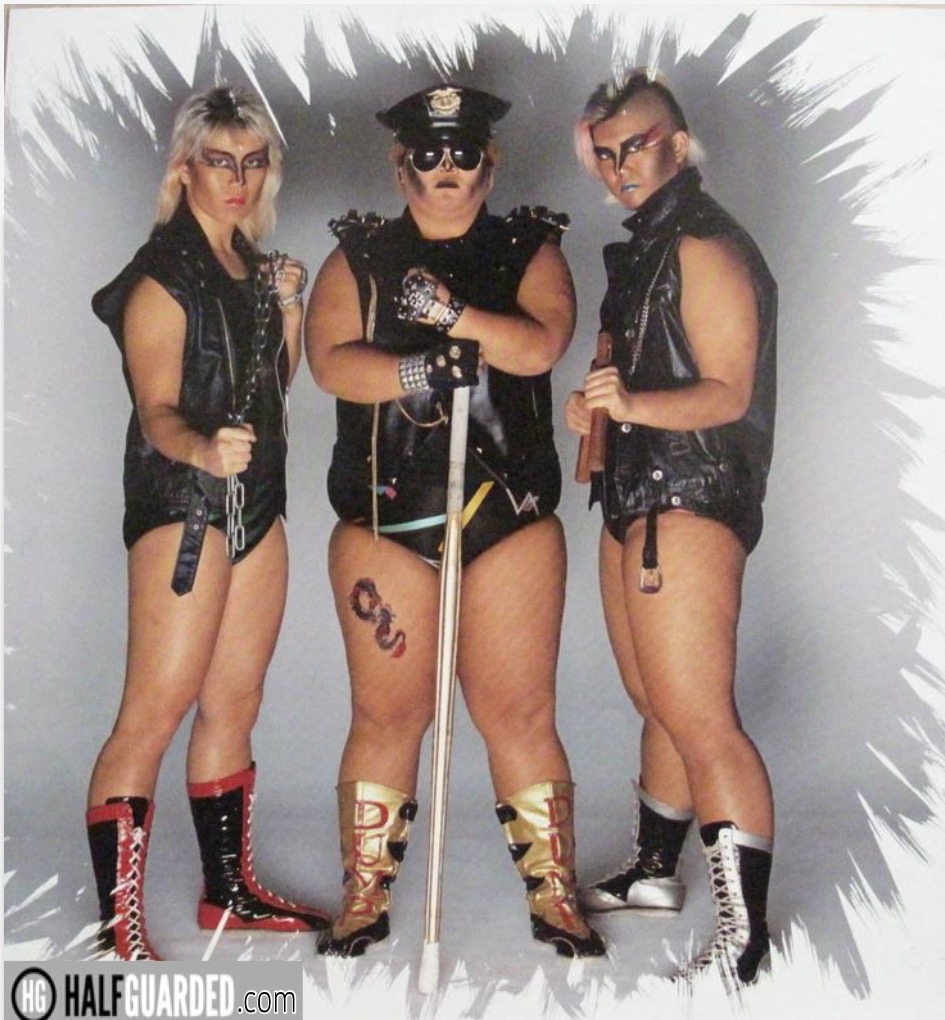 It’s the hottest feud women’s wrestling has ever seen and likely will ever see. A natural rivalry and easy story, the nice girls standing up to the bullying mean girls clique with so many match ups to keep the feud fresh for years as the Crush Girls and their allies battle the various Alliance members in singles and tag matches.

Tonight it’s the key match of the whole war as it’s the Alliance’s despised leader Matsumoto who will battle Chigusa. It’s the feud’s biggest match, the two gang leaders one on one and held at anytime the stakes and bragging rights would be high. But tonight tensions are higher than ever before, with a stipulation that for the first time in Women’s wrestling the loser will have their head shaved in the ring.

It’s a popular stipulation designed to humiliate any losing wrestler, but with women and especially in front of a rabid female audience the implications take on an even more intense level of forfeit. 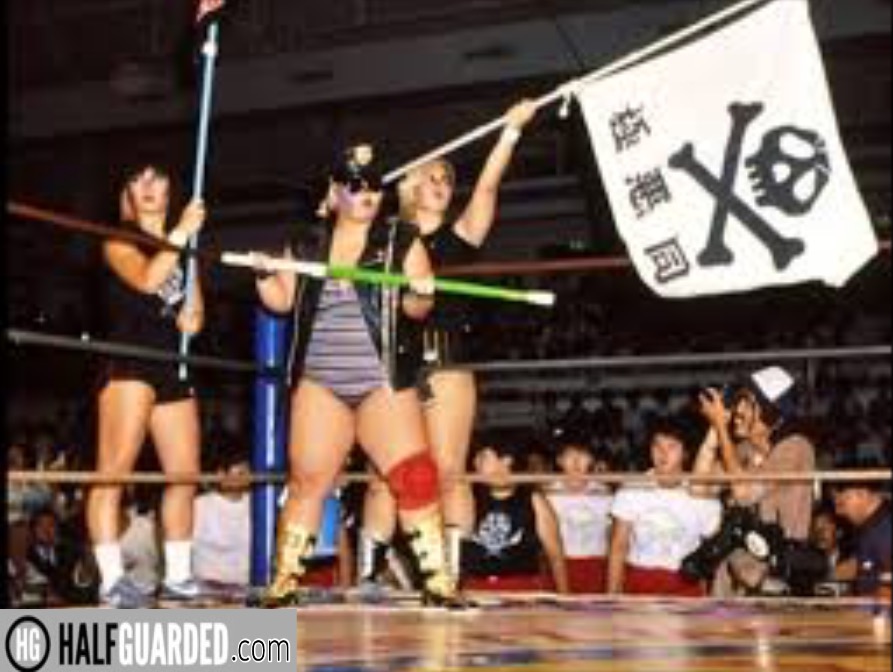 For the crowd of 11,000 mostly female fans there seems little doubt that this will be Chigusa’s finest hour, that she will conquer the monster that is Matsumoto and will be the one shaving the blonde hair from the hated Alliance leader’s head. But from the opening bell as Dump grabs Chigusa’s head and rams her into the ring posts it’s clear this won’t be the crisp, breathtakingly display of athleticism and science that AJW is becoming noted for. It’s going to be a rough, ugly fight.

Chaos reigns as Dump disregards the rules and bullies the referee as she freely assaults Nagayo with foreign objects passed to her by her crew, even using a long chain to choke the Crush Girl. Seeing their idol in trouble only makes the crowd scream “Chi-Gus-A, Chi-Gus-A” even louder, the arena explodes with a high pitched scream of joy whenever she goes for a flash pin attempt, lands a kick or goes for a submission. The monster always powers out of her plucky attempts to gain momentum and continues to maul away at her smaller prey, the first key blow occurring when she strikes Chigusa’s knee with a foreign object causing her to limp noticeably.

Inevitably the action tumbles to the outside of the ring and scuffles break out between combatants teams. Surprisingly in the chaos it’s Chigusa who gains the advantage, repeatedly smashing a metal bin hard over Matsumoto’s head to the frenzied approval of the crowd. However the tide turns in a dangerous way as the scissors brought to ringside for the ceremonial cutting of the loser’s hair are brought into play early. It’s Dump who gets to use them, jabbing them blade first into the forehead of Chigusa and the cries of support are replaced by terrified screams as the blood begins to flow and soon the face of the crowd’s hero is hidden behind a mask of blood. 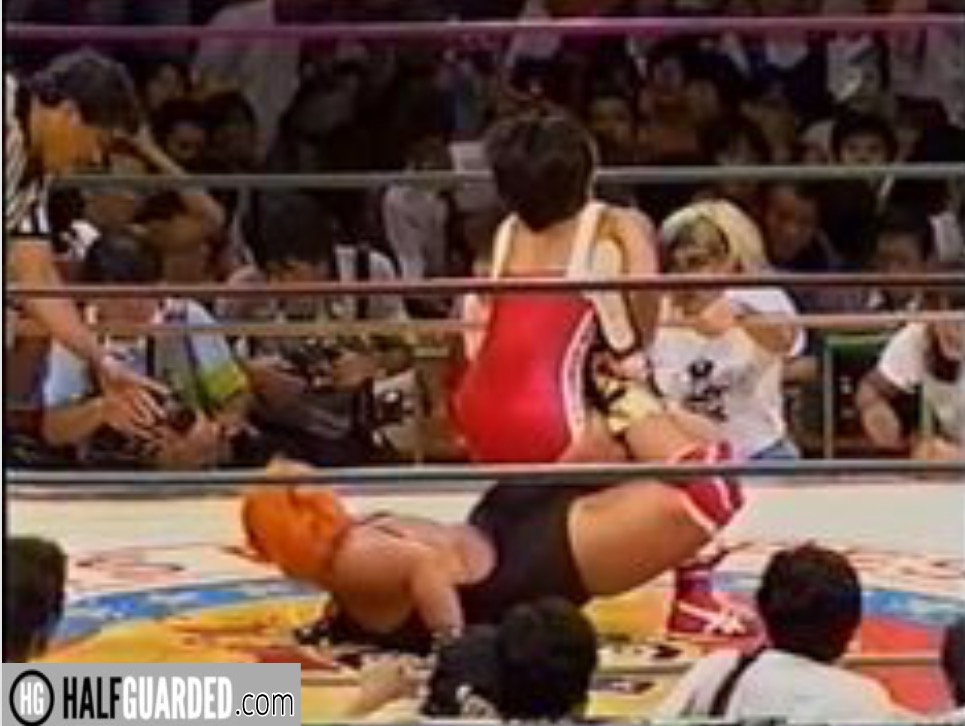 What follows for the rest of the match is a bloody slaughter. Chigusa staggers round the ring in a daze, desperately mounting small pockets of offence against the cocky, smug Matsumoto who unleashes a vicious assault with a plethora of weapons. A table, a microphone, the scissors again are used, when the referee tries to intervene he too is attacked. The screams of horror from the crowd are deafening as Chigusa, a gory mess is dead on her feet so severely that her corner throw in the towel, yet heroically a defiant Chigusa catches it and repeatedly throws it back out of the ring. Nothing short of hysteria has grabbed the crowd at Chigusa’s fighting spirit, desperate for their hero to turn the match around but when Dump brings a chair into the ring the crowd responds with absolute fear even before she sickeningly smashes her broken opponent over the head with it. Chigusa slumps to the canvas, the life seemingly out of her.

Confident that she’s delivered the coup-de-grace, Dump struts around the ring mocking the crowd as the referee starts a ten count on the fallen idol. Miraculously an exhausted Chigusa starts to get up but the count reaches ten before she can fully rise and as the bell rings she sinks to her knees a cry of pure dejection crosses her face, her feelings echoed by the thousand of heartbroken girls in the audience who can’t believe what they’ve just witnessed. 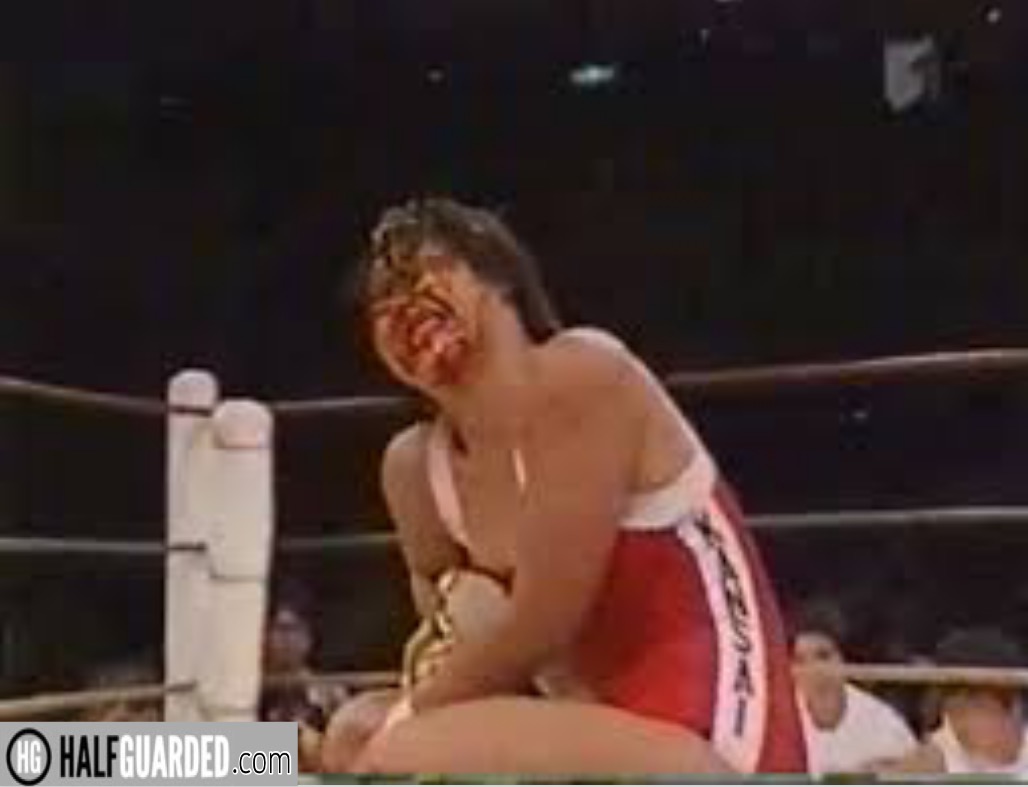 From a wrestling standpoint there are better, more spectacular matches that have come out of women’s wrestling, especially in Japan. However in this short ten minute match the emotion and storytelling is absolutely incredible, the crowd going through the gauntlet of excitement, tension and finally outright horror. It doesn’t end with Chigusa’s defeat. The surrender of Chigusa’s hair is a scene of pure theatre that brilliantly milks every last drop of emotion out of an already delirious crowd.

Everyone plays their role to perfection, Chigusa submitting to her forfeit but clearly traumatised by the ordeal, her allies beside themselves and attempting to protect her and comfort her, Lionness Asuka in particular heartbreaking in supporting her friend through to the end. Meanwhile the members of the Atrocious Alliance are suitably wicked as they shave Chigusa’s head, restraining her with a chain and mocking and manhandling her. The moment where Matsumoto drags her from her chair to the ropes so the crowd can better see her robbing Chigusa of her hair draws shrieks of outrage and despair from the crowd. As a performer this has been Chigusa’s finest hour as her selling of every moment of pain and humilation suffered in the aftermath is nothing short of phenomenal. 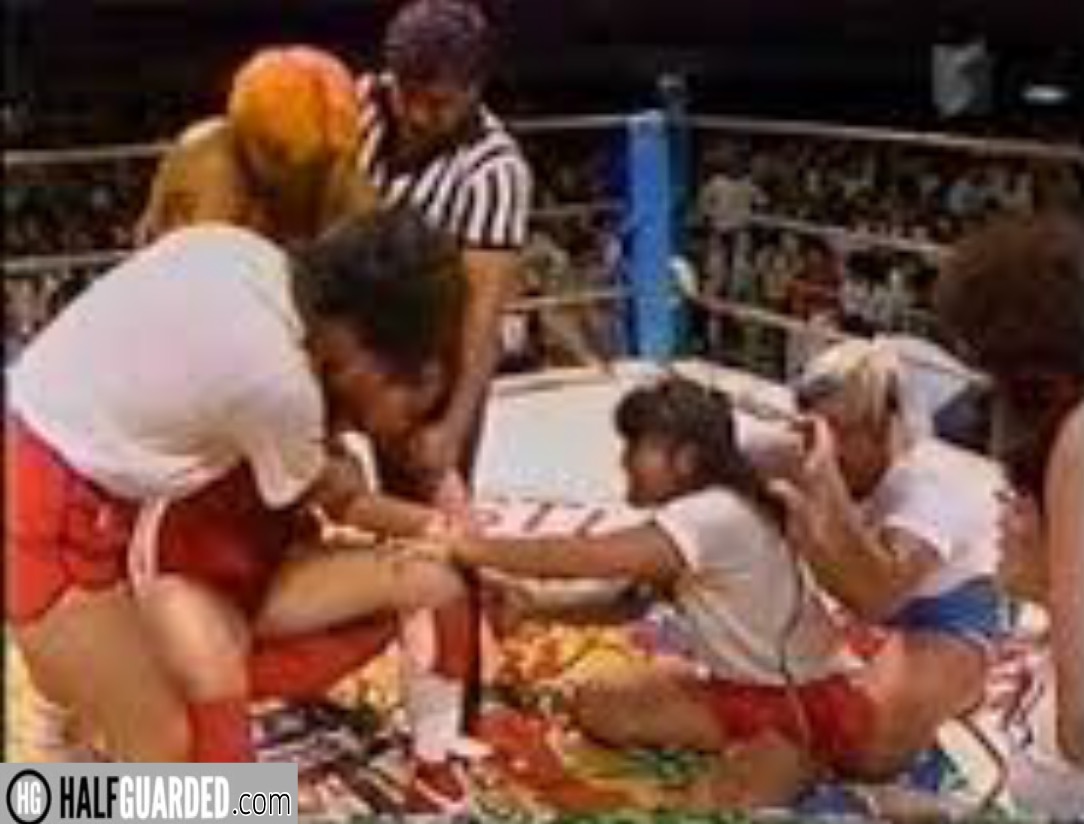 I’ve seen a lot of reactions from my thirty plus years watching wrestling, but nothing that resembles the sight of thousands of girls, broken hearted and sobbing uncontrollably, absolutely inconsolable. It’s a match that is a major achievement on so many levels and should be required viewing for anyone wanting to learn how to work a crowd and invest it in the outcome of a compelling match.

There would of course be a rematch. It was over a year later in September of 1986 and with a crowd just as rabid and a match just as wild, This time the crowd went home happy as Chigusa got her revenge with a roll up and it was Matsumoto who lost her now Mohawk style hair.

Yet nothing can beat that first match for playing with the emotions and feelings of an audience,. That one moment of Chigusa falling to her knees, wailing as if her world has been torn apart and breaking the hearts of 11,000 fans encapsulates everything that pro wrestling at it’s best can be and should be.

Conor Mcgregor vs GSP at UFC 200 - the fight to make: Grady’s Unsolicited Advice To Conor McGregor