In Defense of the Madea Movies

In a year at the box office absolutely obsessed with identity politics, perhaps we should take the financial failures of the all-estrogen Ghostbusters and the wannabe Oscar bait The Birth of a Nation as some sort of populist sign: America’s filmgoing masses don’t want a heavy dose of self-segregating critical theory agitprop lightly disguised as entertainment every time they march on into the multiplexes.

That’s not to say audiences are totally averse to politically conscious movies. Indeed, 2016 has been inundated with a slew of surprising socially-cognizant works, from the multiculturalism-uber-alles leftist kiddo fest Zootopia to the gloriously un-P.C., pro-drug, full-length atheism infomercial Sausage Party. Hell, even the sadly overlooked The Angry Birds Movie has been interpreted as some sort of covert, alt-right-tinged criticism of Europe’s immigration policies in light of the Syrian refugee crisis.

The thing is – and I do believe this year’s box office receipts more than back this up – nobody wants to spend $40 on movie tickets and a bucket of popcorn to be lectured to for an hour and a half. It’s one thing to get an earful from some talking head on HBO, but at the movies, you’re not there to have your political precepts mocked (or even affirmed, for that matter.) Instead, you want to be entertained. You want a spectacle. You want to laugh, you to want to jump up in fright and above everything else – you want to feel the communion of the moviegoing experience. That’s why Marvel and Star Wars nerds line up for hours before opening night – they don’t just want to watch the latest installment in their favorite series (which, frankly, is usually quite underwhelming these days), they want to collectively geek out with their pop-culture-worshipping brethren. That’s why crappy, jump-scare laden horror films will always get shat out by major studios – it’s one thing to freak out in the comfort and safety of your own home, but shrieking in fear alongside 300 people in a darkened box? It’s a totally transcendent social phenomenon.

Which brings us to the long-running Madea franchise, which is perhaps the most intriguing pop cultural construct of the 20th century (no, really.) In an entertainment-industrial complex infatuated with racial divisiveness, suspiciously, no one ever brings up the incredible crossover appeal of the character, which – to date – has generated more than $300 million in theatrical box office revenue.

Tyler Perry’s cash cow is more or less the epitome of a post-racial financial success story, but you never hear the media bigwigs celebrate it as the cross-cultural phenomenon it truly is. Madea isn’t just an icon of contemporary black cinema, the character is indeed the face of modern American proletariat cinema. Madea isn’t just beloved by middle class black audiences, her anti-P.C., folksy demeanor makes her arguably the only ticket-tested draw for today’s working class white audiences. Indeed, Madea is a franchise that does just as well in urban sprawl-addled suburbs as it does America’s rapidly gentrifying inner city neighborhoods – a film guaranteed to make a mint off predominantly black first-run theater audiences and predominantly white streaming-on-demand and Redbox-renters.

Madea: A Post-Racial and Post-Class Appeal

Nowhere was the transcultural gravitas of Tyler Perry’s sass-mouthed caricature more apparent than a recent screening of the franchise’s latest entry, the seasonal cash-in Boo! A Madea Halloween, that I attended in the foothills of metro Atlanta. The audience was easily the most diverse I have been a part of all year: not only was it a good half and half mixture of black and white filmgoers (with a considerable peppering of Hispanics, to boot), the age-range of the ticket purchasers spanned the gamut from elementary-aged ankle-biters all the way up to women – both Caucasian and African-American – who looked to be in their seventies. They were among the masses who propelled the film – which had a puny $20 million budget – to a $27 million opening weekend first place finish, outearning a Tom Cruise vehicle that cost nearly five times as much to produce.

Of course, film critics – usually, the kind of P.C. sorts who champ at the bit to endlessly champion the artistic triumphs of African-American filmmakers – utterly despise the Madea series. Their caustic reviews accuse Madea of punching below his weight and churning halfhearted cash grabs. Some even take it a step further and accuse the Madea character herself as being some sort of post-post-postmodern minstrel show stand-in. The anti-Madea rancor clearly stems from some other deep-seated ideological resentment of Tyler Perry – I mean, is it really fair to chastise him for predictability when the same critics practically worship at the altar of Woody Allen, who has more or less spent the last quarter century making the same movie over and over again? 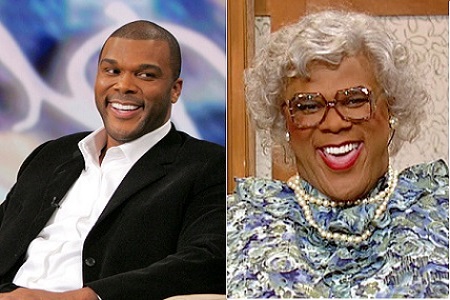 No, it becomes very apparent why those Ivy-educated, eggheaded New York Times and Boston Globe reviewers can’t stand the Madea monolith by the time a quartet of black senior citizens in Boo!  start mercilessly busting the chops of a wealthy, middle-class black father, whose timid child raising skills have obviously emboldened his sassy, rebellious 17-year-old daughter. For nearly 20 minutes, the characters – three of which are portrayed by Perry – bemoan the sad state of parenting in the black community, with the titular character blaming the waywardness of today’s youth squarely on overly permissive moms and dads who are reluctant to instill in their offspring a sense of old-school “tough love.” In Perry’s cinematic universe, the great, overarching disembodied menace that threatens to tear apart black families isn’t racism (indeed, A Madea Christmas is perhaps the only mainstream movie this decade to address the issue of upper middle class black against lower class white discrimination as a legitimate social concern) – rather, it’s the dissolution of strong family values, which, in the Madea-verse, almost always leads to drug use, divorce, financial insolvency and, in one of the more extreme examples of people sowing what they reap, a hearty case of AIDS. In an age in which seemingly every conceivable  special interests group is jockeying for first place in the Self-Victimization Olympics, Perry’s movies preach an entirely different message – that being, the importance of self-responsibility.

While Boo! is still very much a subversively pro-Christianity, anti-modernity film (as evident by one character’s proud declaration that she “loves Jesus” immediately after another character tells her he “went to college”), Perry wisely eschews the usual Madea melodrama and syrupy soap opera subplots for a much more focused, dialogue-driven irreverent comedy that owes much more to anti-P.C. ‘80s classics like Revenge of the Nerds and Back To School than your latest and lamest Amy Schumer and Melissa McCarthy vehicles. Boo! is indeed one of the funniest movies I’ve seen this year, and perhaps the only mainstream theatrical release to rival the brilliantly unhinged Sausage Party in terms of laughs and chutzpah.

There’s a lot of stuff that goes down in Boo! that simply wouldn’t fly under the banner of any other major movie studio. There’s an entire five minute sequence in which Madea and one of her marijuana loving elderly friends mercilessly mock an overweight child. There’s a long backstory discussed among the cast about the time Madea tossed her own son off the roof and put him on life support after one of his testicles was punctured by a No. 2 pencil (yes, she nearly murders her own flesh and blood and it’s played strictly for laughs.) In one segment, an elderly black man brutally cuts down a somewhat “cucked” African-American professional, before yearning for “the good old days” of the 1950s and 1960s. And hoo boy, I bet the feminists sure would love Madea’s incessant chatter about her – and I quote – “whore-01K,” which she frequently reminds us is the 401K equivalent for sex workers. The fairly abrasive material is made even more caustic seeing as how the hard-edged anti-progressive humor is sandwiched in between some fairly predictable dudebro chiding (this being a film set inside a fraternity, I assure you date rape jokes a plenty are on the docket) and a wealth of Charlie Chaplin/Marx Brothers style physical comedy (i.e., get ready for PLENTY of genital punching.) There’s seemingly no way such a jambalaya of content would ever mix into a halfway palpable platter, but to Perry’s credit, the film never lets up once it gets going (save, perhaps, for a third act derailing segment in which dear old dad finally learns how to get tough with his disobedient daughter.)

In that, the film’s ambitionless minimalism is a fairly refreshing change of pace from this year’s crop of big budget, high-concept, CGI-laden misfires and mistakes. It strives to do nothing new with the cinematic form, rather than give us a steady stream of hearty guffaws while furtively imparting upon the audience its belief in the dire need for the resurrection of old school family values. But more than anything, it’s about watching old women curse, yell, smoke weed, punch clowns and expose their wrinkled anatomy to clueless frat boys, just because. Yes, there is something that resembles a formal plot in there, but since so much of the meat and potatoes of the film is in its character exchanges instead of its action pieces, even a formal synopsis of the story would lead you to believe there is more to the movie than there actually is. 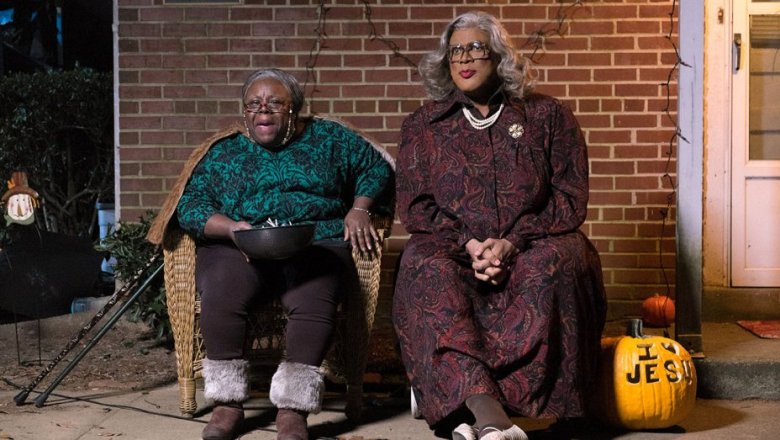 Throughout Boo! I couldn’t help but be reminded of the old Abbott and Costello movies. Indeed, the pseudo-supernatural hokum that undergirds much of the film’s plot seems strangely old-fashioned, providing a sharp contrast to the film’s fairly condemnatory criticism of modern American parenthood. In other ways, Boo! can be seen as something of a logical carryover of the old Blue Collar Comedy Tour and Kings of Comedy concert films – despite their seemingly segregated audience appeals, the Madea series proudly ports about the same regionalist, working-class culture spirit which – as any true Southerner is quick to tell you – supersedes meager, superficial differences like color. (The cross-racial success of the Madea films in the southeastern United States, I have long promulgated, is because the character reminds everyone of their cantankerous, profanity-spouting grandmother – white or black.)

Does this make Boo! rousing, legitimately great cinema? Not even close. But what it does make the film – in some cases, begrudgingly – is entertaining. It’s a film that admittedly aims low with its humor, but frankly, I’d much rather watch a film that consistently nails its low-hanging expectations than some full-of-itself, “high brow,” self-moralizing comedy that spends so much time trying to establish itself as “intellectual” and “socially-conscious” that it forgets to be, you know, actually funny.

There’s a lot of things Boo! isn’t (like tact and subtle), but it’s nonetheless a movie focused on making you laugh at lowbrow antics instead of persuading you into buying into the filmmaker’s identity politics. And hell, even when the movie does get preachy, it still manages to mix in a lot of swears and brusque remarks, so it never really crosses over into bona fide indoctrination cinema.

With Hollywood comedies becoming increasingly paranoid about “offending” audience goers, you’re probably not going to be seeing many more movies like Boo! coming down the pipes over the next few years. It may not be as good as stuff like Animal House or Airplane! but at least the movie tries to revive that old spirit of irreverent, raucous humor. After all, this is a film that ends with teenagers being threatened with sodomy on a prison bus – even if you don’t think it’s contextually funny, you still have to give Perry his props for unashamedly going against the grain and daring to laugh at the things the super-sensitive guardians of the new morality keep telling us are deathly serious affairs.