Well, continuing the saga of everything Ronda Rousey, the new one is that Rousey is engaged. A photo from what looks like a rehearsal or something from SNL is out and it shows a glittery ring on her left ring finger. Traditionally, that’s the finger used when a woman shows that she’s now conditional property of a man. Does this mean that Ronda Rousey engaged Travis Browne? (I like using engage as a verb in this sense because I’m an idiot.)(And because it implies she’s the alpha in the relationship and she totally is.) 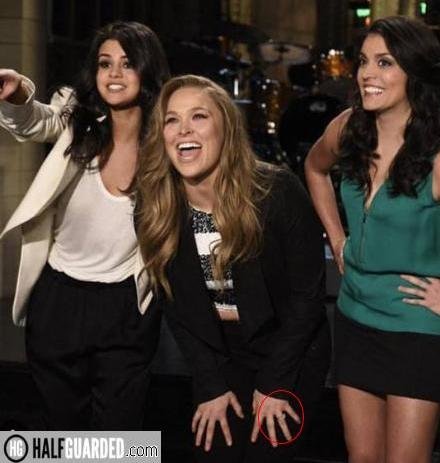 What I do know is 1. Rousey does not have AIDS; 2. She also doesn’t have a world championship.

Could Rousey be engaged? Maybe. She has a well documented past of making questionable decisions with men, which she’s admitted to several times over the years. Travis Browne seems like just the sort of bad mistake she’d make. And he certainly needs to “lock that down” because after the allegations that he beat his ex-wife, I can’t help but think part of the reason the UFC never did anything with that is because you don’t mess with Ronda’s life unless necessary.

On the one hand, this is all salacious speculation but, unlike the bullshit where people made up her having a life threatening disease, this at least falls under the normal category of, “Eh, you’re famous. You have to put up with people analyzing your fingers.”

My ultimate guess is that Rousey is not engaged and simply doesn’t know which finger to use for rings. That might sound stupid but I’ve met plenty of folks who don’t know these very important rules of social etiquette. Or, maybe it’s part of a skit on the show. Or she’s messing with everyone, knowing it’ll get them talking. Or maybe JJ Abrams is directing and it’s a lens flare gone awry.

But if Ronda Rousey is engaged then congratulations.