But is anyone ever truly alive?

by The PunMaster General
in Movie Previews
2

No One Lives 2 Poll:

Are you excited for a No One Lives sequel starring Luke Evans?

No One Lives 2, or whatever they end up calling the sequel to the underrated but still awesome 2012 horror film No One Lives, starring our favorite Luke Evans!

So what would the sequel be about? Well, that’s kinda tricky since the first film was a pretty messed up film about a couple getting kidnapped, and the wife/girlfriend basically committing suicide when there’a knife held to her throat. No. Seriously:

Oh, but then things get really crazy, because you’d think, “Hey, Luke Evans is in this and loves that gal, we want to see him get some revenge!”

And normally you’d be right, only this young couple who was just kidnapped have a young girl in the trunk of their car.

YEAH! That’s right. It turns out they’re kidnappers THEMSELVES. But it gets better, because they also brutally murdered a bunch of people. Essentially, the first set of kidnappers who we are led to see as the villains of this film, kidnapped a couple people worse than them, and then the guy goes and kills them all. They nearly kill him, but one of the women from the first group of kidnappers helps him because her own people are worse. I think.

And at the end, Luke Evans’ character, known only as Driver, because WHO NEEDS A NAME WHEN YOU LOOK LIKE THIS: 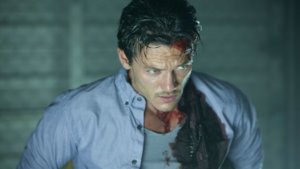 Anyways, at the end of the film, he shows up at a hospital where one of the bad guys is being treated and kills him with a clipboard. With a clipboard. Then he sees the girl who helped him, touches her arm, and utters the name of the film.

I know what you’re thinking, and that DOES sound like a perfect film, so why bother with a sequel?

I’ll tell you why, internet person. Luke Evans. He was awesome as Driver. He could do so much more, and it’s nice to see a film where he is a kidnapper, literally THE bad guy, and a murderer and stuff, but the girl who he kidnaps gets taken by even worse folks, so she eventually sides with Luke Evans, because he is hot as hell. And she saves his life, but he lets her live at the end.

I mean, he’d already murder 14 (YEAH – 14) of her friends, but that was because he wanted money and his girlfriend/wife was still alive. Now he’s cool.

So I want a sequel.

Let’s see Luke take a turn towards being a hero. Now that he’s seen his own love be killed (or kill herself sorta) by kidnappers, he’s all about stopping kidnappings and helping people get their loved ones back. Like he becomes Denzel from Man on Fire.

Sounds like an amazing franchise to me. What is Hollywood waiting for? 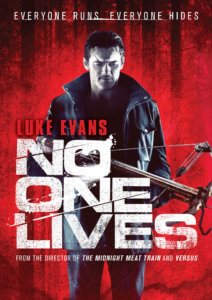 Director Ryuhei Kitamura has said he doesn’t currently have any interest in a sequel to No One Lives. He felt he’d done everything he can with the story and he’s not looking to revisit this world. Bummer. He is interested in making sequels to other films from his filmography, but if there’s going to be No One Lives 2, he won’t be at the helm.

No One Lives 2 Trailer

What’s next for No One Lives 2?

If only the WWE (oh, did I not mention they produced the first film – LOL) would finance another film. It could be awesome. Stay tuned. If more news or rumors on a sequel to No One Lives pops up, we’ll have it here.

Ever Fallen in Love (With Someone You Shouldn't've)

Mental Hell in a Cell

Mental Hell in a Cell