Orlando is not a reason to ban guns; Chicago is

Over Memorial Day weekend, 6 people were killed and 63 more wounded in Chicago due to gun related violence.  This didn’t make national news.  Hell, it barely made local news, as weekend shootings are par for the course in Chicago.  Much of this is due to who is being killed: mostly young black men, typically involved in gang activities.  In that sense, it takes on a feeling of terrorism in the Middle East: hey, as long as it’s not in my backyard, it’s “those people shooting each other.”  Latino night at a gay club in Orlando isn’t my backyard per se but it takes on a more relatable quality.  I’m not sure, but I’m pretty sure gay Latin men don’t have a history of shooting each other.

People are reacting the way they do when something as horrible as Orlando happens: they look for some way to fix things.  That’s only natural.  No one wants to see a repeat of a tragedy.  Some point the finger at Radical Islam, some at guns themselves, some at American attitudes towards LGBTQ-and other letters community, mental health, and so on.  From my cursory readings (and they are just that, because you can quickly get depressed reading about this stuff non-stop) it seems like everything is in play:

1. The shooter called 911 before the shooting and pledged himself to ISIS.  ISIS, I’m sure, was very happy to welcome him into their fold; they aren’t discerning.  But there isn’t really evidence that he was part of a terror network.  “Lone wolf.”  You’ve probably heard that one a lot lately.  It’s the most frustrating type of terrorism because it’s almost impossible to prevent.  If he’d been taking orders from someone there might be a way to intercept phone calls or Emails.  But a guy who just gets wrapped up in a movement and does it all on his own?  You can’t stop him anymore than you can stop a random kid who read Mein Kampf and said, “Yeah, let me go kill some Jews today.”  Can’t exactly go arrest Hitler now, can we?  If there weren’t a lot of crazy Radical Muslims out there waging some pointless “holy war” would this guy have done what he did?  I don’t know.  Maybe he’d have found another evil group of people to follow instead.

2. Guns.  I’m gonna focus on this one a bit more lately but the guy had an assault rifle. (Here’s one for you: Hitler himself coined the term “assault rifle” for propaganda purposes.)  It was legally purchased.

3. Attitudes towards gays in America.  Tolerance and acceptance of the gay community is at an all time high in America.  Gay marriage came into being, and while there was a back and forth on the issue, it seems like most just shrugged and moved on.  But it’s fair to say that The Gays aren’t at 100% equal footing with straight folk.  There are reports that the killer had been to gay clubs in the past, including the very club he opened fire within.  He also may have had accounts on gay dating websites/apps.  It’s a bit cliched to say “homophobe is actually just a repressed homosexual” but maybe that’s the case.  Islam isn’t gay friendly, but really most religions aren’t.  Westboro Baptist Church is, in theory, Christian and they’ve used the phrase “God Hates Fags” so much that it is funny (which is a great way to fuck up your attempts at making a point – be such a joke that everyone laughs at your over the top rhetoric).

4. His ex-wife said he was abusive and that he suffered from mental health problems.  Mental health is a very, very important topic to me.  To some extent everyone who does something like this is mentally unstable; but not every mentally unstable person does something like this.  I think looking at mental health is somewhat of a cop out; it allows us to say, “Oh, ok, this was a chemical imbalance.  We can prevent this with medicine.”  What happened in Sandy Hook was the result of a truly unstable person.  No one, no ideology on earth, no book, no preachings, nothing ever has advocated for the killing of 6 and 7 year old kids “just cause.”  Orlando has other motivations behind it.  Countering and educating people to not preach that gay people are subhuman can and will be done.  Orlando can be categorized as a Hate Crime.  Kindergarten kids aren’t a protected class for hate crime purposes because no one attacks 7 year olds!

America has a “gun culture.”  I don’t know what that means exactly but I’m not someone to own a gun.  I drink too much and would almost assuredly shoot myself or a dog on accident.  I once held a handgun.  It wasn’t loaded, had no firing pin, and was as deadly as a paperweight.  I still felt terrified.  It was irrational but it just seemed like I could still kill someone.

(I did shoot a rifle, I think it was a rifle, at a camp as a teenager.  I was actually really good at it.)

Having a gun for self-protection?  Absolutely makes sense for some people.  I think this is one of those things that people who live in cities or densely populated areas (Europe) don’t fully comprehend.  If you’re my cousin, a farmer in the middle of no where South Dakota, you kinda need a gun for protection.  Not just from people but from wild animals and such.  If the nearest cop is 30 minutes away, calling 911 doesn’t do you much good.

I live in a peaceful suburb where the most dangerous thing is some asshole who lets his dogs shit and doesn’t pick up after them (that’s actually me … nevermind).  The self-protection argument is still applicable, because if someone breaks into my house, the cops aren’t going to get there before he could shoot me.  But a dead bolt and two loud dogs probably do as much to deter would-be banditos.  Plus my being a bad-ass in BJJ.

Around here, you probably have a gun for fun or to go hunting.

You go to a shooting range and shoot at things.  I don’t get it.  I’ll never get it.  Owning lots of guns and just shooting them for the sake of shooting them is foreign as hell to me.  Ditto hunting.  But most people don’t understand the fun in wrestling with grown men while we wear spandex.  Every hobby is weird if it isn’t your hobby.  So, I guess if you like shooting guns you’d like to shoot different kinds of guns, like someone playing video games wants to play more than just the same game over and over again.

I still think it’s stupid but I’m a moron so who cares what I think?

Back to the horror and the role guns played.  Every time a mass shooting happens there is a call to ban guns, or certain types of guns at least.  To start, this is close to impossible.  You may not like the 2nd amendment but it’s there.  It can be amended, it can be written out of history, but it takes a lot to do so.  The Supreme Court is simply very, very clear that owning a gun is a protected right in certain circumstances (see: District of Columbia v. Heller, 554 U.S. 570 (2008)).

Even beyond the Supreme Court ruling, there is a practical reality to taking away every gun.  You know how people say it would be impossible to deport all illegal immigrants?    That’s nothing compared to guns.  There are 300 million legally owned firearms in America, with 40+ million people owning at least one.  Confiscating that many guns would be Herculean, and that’s not even accounting for the fact that people with a gun have a means of preventing you from taking said gun: ya know, the gun itself. 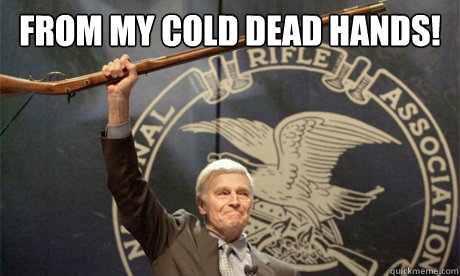 Here’s the thing that bothers me about linking guns with Orlando: they aren’t related.  Guns are dangerous because they can let you kill without thinking.  You don’t need to plan things out if you have a gun in your pocket.  Someone makes you mad?  You can whip out a gun and just shoot.  The attack in Orlando was premeditated.  The assault rifle maybe made it easier for the guy to kill people but terrorism doesn’t need a gun.

Timothy McVeigh murdered 165 people and injured 600+ more and he used fertilizer.  Shit.  Shit was more deadly than a gun.  Obviously 9/11 used nothing more than guys grabbing control of airplanes.  If you want to cause death and mayhem it isn’t that tough.  Get a gallon of gasoline, add in some nails, and you have a crude bomb that would be enough to kill people if placed in the right location.  And someone intent on carrying out premeditated killings like in Orlando will find a gun somehow if they want one bad enough.

France has strict gun control laws and yet in November, 2015, guns were used as part of the deadly attacks in Paris.  130 people were killed that night; 39 are known to be the result of shootings.  89 people also died in the Bataclan Concert Hall when terrorists opened fire on concert goers.  I can’t say for sure how many died as a result of gun fire, as the men also detonated suicide bomb vests at one point, but it’s quite possible that most, if not all, died as a result of guns. 120-130 people dead in a night, all in a country where they don’t have a “gun culture.”

If the evil sack of shit in Orlando wanted to find a gun, he could, even if they were all made illegal.  And if he couldn’t, he could grab a ton of feces and blow it up.  Or put a lit rag into his gas tank and plow into the club.

Chicago on the other hand…

Since January 1st, 2016, Chicago has had a total of 278 gun related murders.  None were part of a terrorist movement.  They’re, with maybe an exception here and there, gang related.  They are the type of spur of the moment shootings I mentioned before.  Some people go out with the intent to kill but many drive around with a gun and just decide on a whim to shoot someone because he’s on the wrong corner, or wearing the wrong colors, or just for fun.

Of course, until recently, Chicago had some of the strictest gun control laws of any major city in America while also having a high gun-related murder rate.  When people couldn’t get a gun in Chicago, they just went somewhere else and brought it back.  Where there’s a will, there’s a way.

Those deaths are an argument to put into place stricter control laws.  I’m not saying that I agree or support such arguments but they’re more valid than a using a random act of terror as justification for literally rewriting the Constitution. Using Orlando to further a political agenda is missing the point of gun violence.  Real gun violence, the kind that could be curbed by greater gun control laws, happens every weekend in Chicago. Not Orlando.

His Name was Muhammad: a Punk, a Man, a Muslim.

His Name was Muhammad: a Punk, a Man, a Muslim.