I hate Cecil the Lion

Some Place With Small Penises

Like many a writer, procrastinating is simply part of my ego, superego, and id.  I write therefore I put it off.  I’d been meaning to write about hunting and its utter stupidity.  I’m somewhat apolitical in most things in life – I just tend to shrug and not care because even though I can think it all through, formulate YAY and NAY positions, not caring is easier.  But I’ve always found hunting stupid.  And now stupid ass Cecil the Lion makes me look like I’m hopping on a bandwagon, not leading it as I should: I should always be the leader of everything.

I note now that I eat a diet that is 95% meat and that most of those animals probably never saw daylight and while I guess it’d be better if the chicken could hop around a bit in the sun, ultimately I want it killed, butchered, and served up for food.

Same with a cow.  In fact, cows are nature’s PERFECT food: they are huge and thus provide a ton of meat, they are slow, and they’re dumb as shit.  They don’t even do anything entertaining nor do they seem to have fun.  I’ve seen dogs, cats, bears, and so on play and such.  I’ve never seen a cow do anything but stand in the same place in a field and chew grass.  And a cow can provide leather and clothing and stuff.  Great animal to exist just to die.

Hunting though is stupid.  We do not need to hunt anymore.  Thus, the only reason people hunt is they want to kill something.  That’s it.  If you want meat, driving five minutes to the store and getting food that you know has passed safety checks and all that is a buttload easier.

(Yada, yada, some people need to hunt because they live in the middle of nowhere.  No, they don’t.  I’m pretty sure you can have anything shipped anywhere.)

Some hunters even call it a sport.  A. SPORT.  It’s the only sport where the opponent doesn’t know its a sport and where you win by killing something with a silent gun from a quarter mile away.  Oh yeah, real fucking sporting.

Then some idiot dentist went and shot that stupid ass lion and now I feel like everything I’m writing is just me glomming on to the zeitgeist of the moment.  I hate that feeling.  Frankly, if you’re going to hunt something, a lion is pretty high up there with animals that it’s ok to hunt.  Deer?  No.  Fuck no.  If you hunt deer you are literally the bad guy from Bambi.

I don’t even know everything that went on with ol Cecil.  In passing I heard that he was on protected, no hunt, land and that someone then lured him off it with meat or something and then they shot him.

Fuck off.  You didn’t even have to stalk him or anything, Man From Minnesota Who Chose A Career Where Everyone Hates You Already.  This dentist paid north of $50,000.00 to have someone gift wrap what is apparently the most famous lion in the world – and then he shot it.

WITH A BOW AND FUCKING ARROW.

I guess this didn’t kill the lion and they then had to track Ol’ Cecil for two days before finally blasting away with a gun.  I’m no expert, because my penis isn’t that small, but if you want to hunt a lion: don’t use the weapon of choice of Hawkeye.

And whilst I haven’t been a hunting fan for a long, long time, what really tipped me over the edge was maybe the single most absurd thing I’ve ever heard of and it wasn’t Cecil: it was a wedding.

A friend of mine, whose name shall be withheld to protect the innocent, is getting married, reception, all that jazz.  I’ve tried my best to talk said person out of this, knowing that marriage just ends up with me broke and homeless, but no luck.

Upon the soon to be mother-in-law finding out the date the lovely young couple had chosen, said mom (who has to be evil) said, “Oh, no, that’s no good.  You have to change the date.  That’s the first weekend of hunting and people won’t be able to make it.  We can’t ask people to choose between the two.  Change the date!”

And it’s just the first weekend.  It’s not like hunting season is two days.  It is called hunting SEASON for a reason: it lasts a while.  In essence, there are people who are upset that they don’t get first crack at basically the dumbest and slowest of the animal kingdom.

Change the date of what it is safe to say is a top five most important and memorable day of a person’s life to accommodate people who just don’t want to admit their penis is small.  And even worse: there is a very real chance that someone might say, “Sure, that’s my niece/nephew/brother/sister getting married but I can’t be there for that: I’ve gotta go shoot something in the head before it even knows what hit it!” 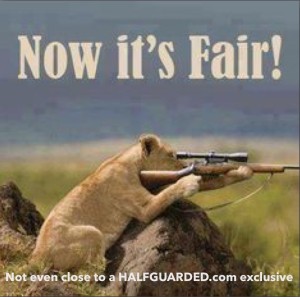 The only kind of hunting that is permissible is the following: you can only use a knife and the animal has to have a realistic chance to fight back and win.  Then, that’s more or less a fair fight and I’ll allow it.  You+knife vs. A Bear is cool.  Using some high powered rifle while you sit in a tree isn’t hunting, it’s just stupid.