by Chris Najdek
in Evergreen, The Other Half
1

As President Trump continues to improve our country by boosting the economy, lowering our number of Covid 19 cases, and being un-nice to crime, The Donald has formulated a new plan to combat a long standing problem in our country.

“If we stopped testing for pregnancies now we’d have very few, cases if any. I think the testing is overrated even though I’ve created the greatest pregnancy testing machine in history.” Trump said during an interview with Halfguarded

When asked what he thinks the root cause of teen pregnancy is, Trump blamed China and President Obama. “We have these Chinese sperm coming over from China and impregnating our youth because Obama wasn’t tough on trade! He let China walk all over him.”

Vice President Pence also blamed Obama. “I mean, think about it. Obama walked around in those tight pants, form fitting shirts, and hot sunglasses. Of course the pregnancy rate went up. How could you not want to let your boyfriend bust inside you with such a sexy piece of man running this country. President Obama’s policies raised more than just concern for me if you know what I mean!”

Vice President Pence winked and elbow nudged me right after he made that comment. It was rather uncomfortable.

Trump doubled down on his new plan when he tweeted: 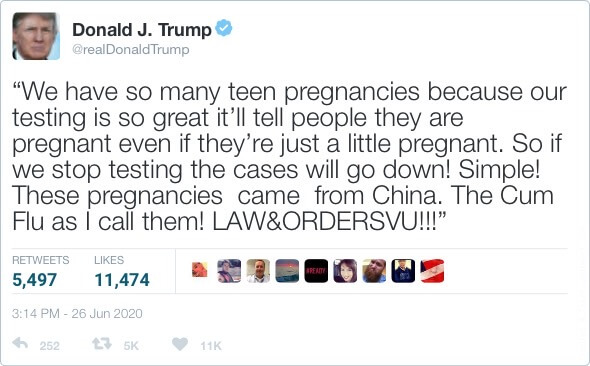