Amidst the covid-19 controversy, President Trump announced he’s protecting himself against the deadly virus by getting in better shape. After Nancy Pelosi called President Trump “morbidly obese”, Trump countered with photographic evidence that he’s been taking he controversial medication “Hydroxycut”.

The Donald took to Twitter to explain his transformation:

“Taking Hydroxycut! Was already VERY fit, now I’m the FITTEST. I even have that V thing leading to my weiner. Nancy Pelosi is fat and I’m blacker than Obama ever was. My abs are really something. The gays will love them. The blacks are mad I’m not THICC anymore but still LOVE me!” 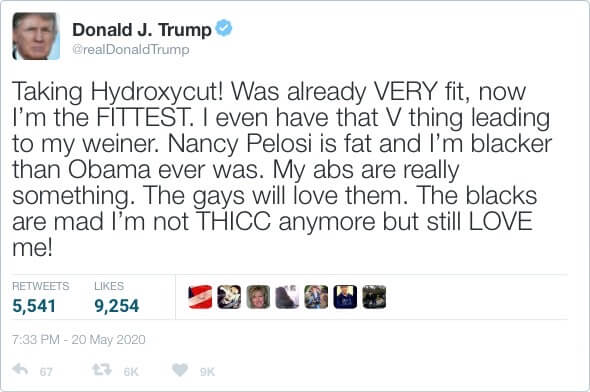 Many Americans are skeptical of the photos. Trump supporters however, are said to be flocking to the stores to buy Hydroxycut, get in shape, and turn black so they can use the “N word” with impunity and not get kicked off Twitter.