Folks, I’m gonna watch some of these fights and put down some of my thoughts.  If you expect more than that from me then you’re new to the site.  Or you’re my mother and still have hope for me. 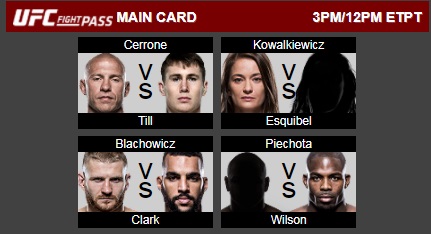 Donald Cerrone vs. Darren Till

What happened?
Till made himself a name. First round and he owned all. Till stalked Cowboy, who could do nothing but back peddle. He jabbed him at will and fired off straight punches when he wanted. Cerrone had nothing to offer and ultimately dropped to his knees and turtles up rather than stand and take more punishment.

Should You Watch?
Yes.

What happened?
held won with grappling. He’d threaten leg locks and use them to get on top and do little.

What happened?
Not bad. They beat on each other for almost 15 minutes, just one of those grinding deals. Then with a minute left, Brian clocked the Pole with a right hand it was over.

What happened?
Garbage. Neither man did shit. Alvey has the excuse of a ton of weight to cut and short notice. The Russian? No excuse. Just another boring Russian. First they stole democracy, now: sport itself.

Fili did better wrestling. Lobov marched forward like getting hit and bleeding made hm hard. Fili kicked him in th Head in the first round and almost finished but didn’t so it went fifteen. Conor walked back and forth on the arena floor yelling instructions but mostly just getting attention. Fili won.

Emmert murdered a man for 15 minutes. Dropped a Brazilian mother fucker four times in the first round alone.

This video (might) make you want to watch EBI 13: The Lightweights

Where You At, Dana? The UFC media scrum is (still) curiously gone...

Where You At, Dana? The UFC media scrum is (still) curiously gone...