Why Game of Thrones SUCKS.

A lot of people think I’m contrarian just to be contrarian, like I automatically have some kind of revulsion for any and all things popular.

What I don’t understand is why people think it’s a bad thing to swim against mainstream tastes. You know who could’ve used some contrarian thinkers? Nazi Germany and America during slavery … too bad everybody was just celebrating what was arbitrarily deemed popular there, eh?

Of course, in today’s post-Facebook world, the only true communal culture is consumer culture. We all have different skin colors and speak different languages and pray to different gods and come from different countries and believe in different political ideologies and like our sex in different holes and as such, popular culture is now pretty much our only unifying, transnational identifier. And among those damned millennials, one of the most popular transcultural phenomena of ‘em all is Game of Thrones – the gore-soaked, sexualized violence-glutted HBO program that routinely outdraws the NBA playoffs in terms of the 18-34 viewing demographic.

I’ve only seen two full episodes of the program and trust me, that’s enough. In my introduction to the show, I watched a woman beaten, bloodied and forced to walk totally naked down a city street where people called her a “cunt,” men flashed their penises at her and everybody took turns spitting on her. My second encounter featured the same woman getting revenge by siccing an armored rapist on one of her political rivals, a scene where a man is force fed the remains of his own children and a rather delightful episode in which a young child, played by an actual child actor, saws open the trachea of another human being. 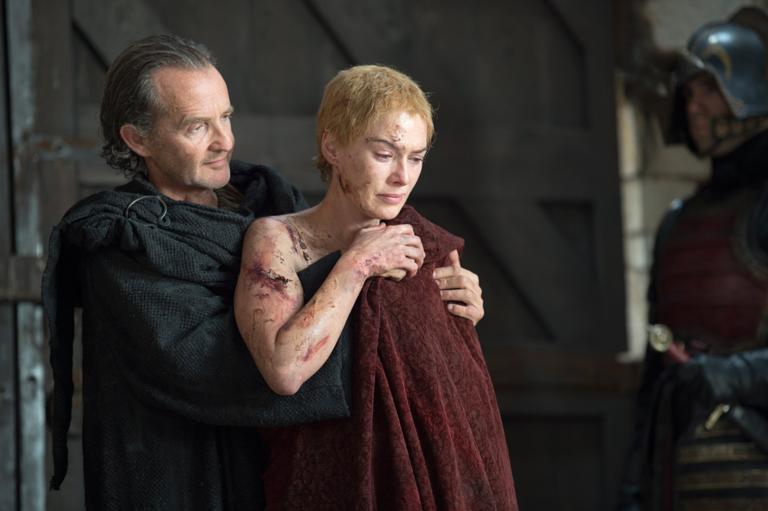 Look, I’ve got no problem with violent entertainment. Indeed, this entire website revolves around the culture of men and women trying to beat each other into comas for Reebok money and PPV dividends. But any non-retard can obviously see the difference between an NFL game and something like Game of Thrones. One may depict real-life violence, but it’s violence sans an overarching cultural ideology. Boxing, wrestling, hockey and MMA has plenty of blood and swollen eye sockets and shattered teeth and popped eyeballs, but it doesn’t come with a social message. This crap being shat out by George R. R. Martin – a morbidly obese hyper-sexist who undoubtedly will be revealed as a serial child abuser at some point before he dies – however, does, and I can’t help but see it as a detrimental one for America as a whole.

The insane violence we see on TV shows like Game of Thrones, The Walking Dead and Breaking Bad is different from the type of violence we see in old ‘80s horror and action movies. For one thing, the graphicness of the violence on cable TV today is much, much harsher than what we saw in Robocop and A Nightmare on Elm Street back in the day. As a matter of fact, just one episode of Game of Thrones contains more guts and gore than ALL 12 Friday the 13th movies combined.

Secondly, back then we had to wait a full year before the sequel to whatever stupid violent bullshit we were into hit theaters; now, all we have to do is wait a week and they zap in all the craven carnage we could ever desire into our own cable boxes. And thirdly, the amount of sexualized violence we see on GOT goes far and above anything that’s allowed by the MPAA even now. If Game of Thrones was a movie, there’s no doubt it would be worthy of an NC-17 rating.

But that’s not the big problem with GOT. No, the problem is that aforementioned social message alongside all the wanton bloodshed and debauchery. As violent and stupid as Halloween and Commando and Predator and Hellraiser may have been, they at least TRIED to imbue a sense of morality into the audience. You weren’t SUPPOSED to root for Freddy Krueger, and at the end of the day, you knew all of those evil, murderin’ commie bastards were going to get their just desserts at the hands of Ah-nold, Chuck Norris or Chuck Bronson. The movies were canonically aware that good and evil existed. In their cinematic worlds, right and wrong were tangible constructs. There were mendacious aggressors and there were heroic counter-aggressors. The good guys never drew first blood, and the bad guys never had the last word.

But in Game of Thrones, there is no such thing as good and evil. There are no greater human virtues. Valor doesn’t exist, and neither does mercy. Nobody is depicted as forthright, honest and noble – everyone is just various shades of self-centered, self-justified and self-righteous. In Martin’s dystopian hellhole, there is no redemption, no altruism and no grace. God is dead and so is the devil, and the only cardinal value left is “might makes right.”

Moralistic violence is one thing – even films like Goodfellas and The Godfather show that wanton, violent, antisocial behavior doesn’t pay in the end. But in this, the gilded age of prestige television, nihilistic violence reigns supreme.

There are no valorous heroes in our most popular dramas. Instead of MacGyver and B.A. Baracus, we’re supposed to cheer for bona fide sociopaths like Walter White and Frank Underwood. Even the biggest network TV shows – Scandal and the bluntly-titled How To Get Away With Murder – wallow in a sense of moral relativism. But when it comes to cynical television, GOT is undoubtedly television’s reigning grand champion.

Outside of mockumentaries like Faces of Death, I can’t think of a single media brand that’s more life-disaffirming than GOT. Even Bumfights has its periodic moments of introspection suggesting salvation is possible, but in GOT all the viewer gets is death, deceit, destruction and even more death. In Martin’s hopeless fantasy world, the only thing that has any transcendent value is the power to subjugate others and fulfill sick revenge fantasies. Everything else – love, honor, bravery – means absolutely nothing.

Whereas other TV shows revolve around character development, GOT is a program that revolves around character dismemberment – the dyed-in-the-wool Thrones fanatic tunes in each week not to see his favorite characters grow and learn, but see which unlucky cast member gets decapitated, disemboweled or blown to smithereens. The crappy, formulaic Conan the Barbarian drivel masquerading as a “plot” is just a convenient excuse to show more up-close bloody stumps and listen to characters give soliloquies about the joys of incestuous sex; the parade of degeneracy and depravity doth continue.

Game of Thrones is precisely the sort of decadent bullshit that reminds me why I haven’t owned a television in more than a decade. And if you think it’s preposterous that one man’s dissident opinion has any merit in the face of millions of happy weekly TV viewers pleading to the contrary, just remember: millions of you assholes thought old Adolf was just peachy keen, too.

The Death of Notre Dame

The Death of Notre Dame