Cops Deliver McDonald’s to 5 Year Old Who Called 911, Then Brutally Beat Child For Reaching Into His Pockets

Cops in Grand Rapids Michigan are being revered for delivering McDonalds to a 5 year old boy who was hungry, but his grandmother was asleep so he decided to call 911 and ask for police to bring him his favorite fast food.

When officers heard about the call they decided to help the kid out as well as double check that he was ok, they picked up some food and delivered it to the boy.

What most don’t know about this story is as the boy was eating his nuggets and got some ketchup on his hand, he reached into his pocket to get a tissue and police reacted in a swift and brutal manor by taking the child down and kicking him repeatedly til he dropped the napkin. 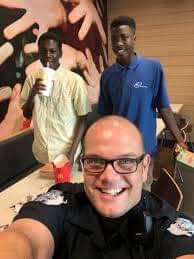 “He was acting funny the entire time, he kept reaching over the table to “dip” his nuggets and was told to stop several times. He was blatantly defiant. When he stood up and stuck his bloody hand into his pocket we had no choice, I’ve seen it a million times and at the end of the day I’m going home to my family.”

Officers were reminded the “blood” was ketchup and they watched as the boy dipped his nuggets into that ketchup repeatedly.

“You weren’t there! You guys have no idea what’s it’s like to be out here putting our life on the line just to bring fast food to honest law abiding citizens.”

Despite the sideways turn this situation took. Police departments across the country have decided to take a page out of Uber Eats playbook and pair up with Uber to develop an app where officers can now deliver fast food right to your door as well as beat the ever loving piss out of you in the comfort of your own home. You’ll never have to leave the house to go viral and have nothing else but a Nacho Bell Grande to show for it again. The app’s tentative names are either Uber Beats or DoorSmash.

That Time Jon Jones was on Joe Rogan's Podcast