The Greatest NFL Rivalry Nobody Talks About

In many ways, Atlanta and New Orleans are parallel cities. Both are major regional economic centers and transportation hubs. Both are predominantly comprised of black urban cores, with expansive white suburbs and exurbs. Each city is known for disastrous infrastructural engineering – in the case of Atlanta, the horrifically designed, traffic-ensuring downtown connector and for New Orleans, its shoddily constructed levees. And both cities will forever be connected to their own diametric destruction; Atlanta, the city devastated by fire and New Orleans, the city destroyed by water.

The two cities have yet another eternal bond in the form of historically underperforming professional football franchises. While the Atlanta Falcons and New Orleans Saints have both had their fair share of success over the years (lest we forget, both teams have made Super Bowl appearances, with the Saints winning the whole kit and caboodle in 2010), for the most part, they are two franchises that have been mired in frustration and failure since their inceptions in the 1960s. Since joining the league in 1967, New Orleans has only posted 12 winning seasons. The Falcons haven’t done much better, recording just 13 seasons above .500 since joining the League in 1966. Atlanta’s all-time regular season winning percentage stands at about 43 percent, while the Saints’ all-time regular season winning percentage rests at 44 percent. The Saints’ all-time playoff record? 7-9. The Falcons’ post-season record? An even worse 7-12.

Even during the Drew Brees and Matt Ryan era – where there has been considerably more success than sucking – neither team has really been given the marquee treatment by the NFL, even when said teams were wrapping up seasons with the NFC’s best overall record. The pro football suits have never looked upon the Saints and Falcons with the same sense of reverence they have afforded the Cowboys, the Patriots, the Packers or the Steelers. To the NFL, the Falcons and Saints have always been B-tier squads, hardly anything more than precious TV market filler. If they could, they’d send both franchises to more lucrative destinations – like, oh say, London or Toronto – the first chance they got.

Perhaps it is this overlying national disrespect which fuels the Saints/Falcons rivalry, which is certainly the oldest – and arguably, most heated – pro football grudge south of the Mason-Dixon line. Long, long before overgrown shopping mall cultures like Tampa, Charlotte, Jacksonville and Phoenix got NFL teams, the Falcons and the Saints were the sole representatives of what could rightly be considered “sunbelt” football on the professional level. Yeah, I know there were already teams in L.A., Miami, and Texas, but by and large, they were all having to duke it out with teams in NHL markets, like Boston, Pittsburgh and St. Louis. The Saints/Falcons rivalry represents the first true intra-sunbelt feud in pro football, the first all warm weather rivalry in the National Football League.

And that humid weather, naturally, lent itself perfectly to some bad blood on the gridiron.

By now, we all know that the southland isn’t the best region for professional sports. That’s for two reasons. First, pretty much every major economic hotbed in former Confederate territory is comprised of transplants – a great majority of whom hail from the northeast, midwest and west coast. They don’t sever their pre-existing hometown allegiances in the migration, so in cities like Atlanta and New Orleans, the in-city NFL team usually exists only as a pit stop for  the visiting teams residents actually care about. And the people who actually were born in Georgia and Louisiana? Odds are, they pledge their eternal allegiance to college football teams, like UGA, LSU or whatever other random SEC school their mamas and daddies went to, and don’t give half a shit about the NFL.

But there are legitimate Falcons and Saints fans out there, and they are tripley pissed because a.) the NFL looks down upon them as second-class franchises, b.) they have so many out-of-towners around them that the cities can’t really establish a professional sports-caliber fanbase and c.) no matter how well their teams do, they will always play second fiddle to Southeastern Conference football. And of course, when the teams do make a solid post-season run, in come all the bandwagoners, who will jump ship as soon as the local team lobs its first playoff  interception. 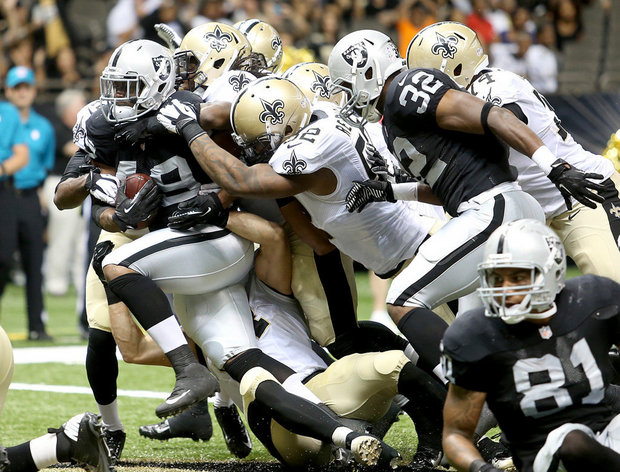 And with all of that on their plates, the hardcore Atlanta and New Orleans fans turn their internalized hostility towards the only targets that make any sense – each other.

The Saints/Falcons rivalry, just in terms of sheer, good old fashioned hate, has to be one of the ten best in the NFL. Alas, despite the longstanding hatred undergirding the feud, it never gets anywhere near as much coverage as the Redskins/Cowboys, Packers/Vikings and Jets/Patriots rivalries … even though the Atlanta/New Orleans rivalry, especially as of late, has been much more relevant when it comes to painting the final portrait of the NFL postseason.

For most people, their only acknowledgement of the Saints/Falcons rivalry comes in the form of that Monday night game from 2006, in which the Saints, making their big return to the SuperDome, famously blocked a Falcons’ punt for a defensive TD so iconic, the Saints put a damn statue of it outside their stadium.

Few outside of Louisiana or Georgia are familiar with the rivalry’s other high points, including Steve Bartowski’s back-to-back miracle wins against the Saints in 1978, or Chris Miller’s 61-yard game winning bomb in the Falcons and Saints only playoff meeting in 1991. The Michael Vick vs. Aaron Brooks saga of the 2000s was definitely one of the more underappreciated quarterback duels of the decade – a rivalry made even better because, what do you know, Vick and Brooks just so happened to be second cousins. Nor do many recall – if they are even aware – of the super-close, division-clinching games the two teams fought tooth and nail for in 2011 and 2012. With Atlanta leading the all-time series 49-45, it’s certainly a much more competitive rivalry than some of the League’s more heavily promoted feuds. The rivalry routinely discussed as the best of the modern era, the Patriots and the Colts, for example, is hilariously one-sided, with the Pats holding a 51-29 all-time edge and winning the last seven matchups. Conversely, whenever the Falcons and Saints play, you know it’s going to be a down and dirty affair – and as the recent tally indicates, more than likely it’s also going to be a ferociously close contest, to boot.

The bitterness has only intensified in the wake of Hurricane Katrina. That’s because so many displaced New Orleans residents migrated to – you guessed it – Atlanta. The downtrodden, inner-city Falcons fans hate the Saints because their fans literally came in and got their resources – first dibs on housing, all kinds of federal aid, subsidies out the ying-yang. Suburban Falcons fans can hate the suburban Saints fans for being such fairweather yahoos (with the incessant “Who Dat?” chant enough to make ‘em wanna’ bludgeon them unconscious with whatever Home Depot tools are just lying around.) So loathe some Atlanta natives are to the Saints and their sympathizers, at least one local sports bar (which shall remain nameless), has become infamous for blaring “Rock You Like a Hurricane” every time the Saints turn the ball over. I can only assume Saints fans in their native state foster the same sort of unbridled hatred for Atlanta and its denizens; I’ve never been there, but I’m pretty sure there’s a bar somewhere in metro-Nawlins that plays “Atlanta Burned Again Last Night” when Julio Jones drops a pass and the patrons make off-handed remarks about Wayne Williams and the Centennial Olympic Park bombing. 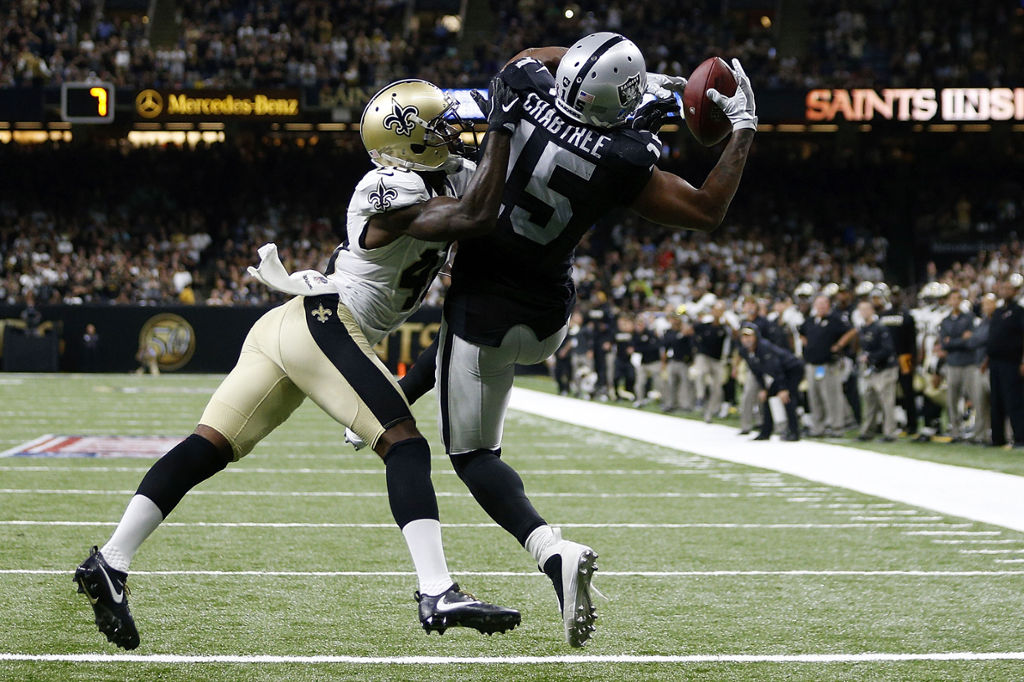 And it’s a pity so few people outside of the tornado belt ever get an opportunity to see the Falcons and Saints beat the crap out of each other. Indeed, the same way their collective cultures eerily mirror one another – Atlanta, the uneasy amalgamation of Young Jeezy and Honey Boo Boo, and New Orleans the grimey cross pollination of Duck Dynasty and Lil’ Wayne – watching the two teams clash is kinda’ like watching an old Ryu vs. Ken battle in Street Fighter II. Their offenses look alike, their defenses are practically identical, their special teams are kissin’ cousins and hell, their uniforms are even hard to tell apart sometimes. And the fact that each team, and each city, reminds the other of itself makes their blood boil even more.

So what a surprise to see the Falcons and Saints booked for the Sept. 26 edition of Monday Night Football. Finally, everybody coast-to-coast got a chance to see the League’s most underappreciated rivalry unfurl in high definition hatred, complete with its blood-stained fleur de lis and bird of prey patches. Everybody in America got to see the hard hits, the lightning fast offenses and the sort of deep-fried, down-in-Dixie pro football animosity that simply can’t be replicated by any other two teams in the country.

And naturally, it was scheduled the same night as the first presidential debate between Donald Trump and Hillary Clinton, ensuring that America’s eyes – as has been the case since 1967 – continue to shy away from the NFL’s most criminally unsung blood feud.

Who said what before UFC Portlandia?

Who said what before UFC Portlandia?