Yesterday was Easter Sunday. The most pious of all piety in terms of a religious day at least for Xtians. If you read my most recent article, Fuck You Religion, right here on HalfGuarded.com, you know my thoughts already. This article is about my experience on Easter 2016. It’s going to be about my dog as well, but bare with me. Here’s a teaser photo…

I am formerly a Catholic, a full on cracker eating pillow whispering Catholic, but now I am a militant atheist. Not in the sense that I’m militarized (I’m not a gun person), but in the sense that I am active in the community. I host a radio and TV show about atheism each week in America’s biblical urethra, Knoxville, Tennessee. (For more info about my shows check out knoxvilleatheists.org – rationalists.org or tweet to me @ChairmanofGuam)

Every Easter Sunday growing up, we did the same thing. Morning always began joyously in search of hidden eggs (my mom hard-boiled and painted the ones for the house hunt #delicious) and we each got TWO easter baskets. That’s right, a double candy haul! My brothers and I would have candy galore and it was awesome, but only after we found our baskets. My dad relished the opportunity to fuck with his children by hiding them really well. In fact, he called me yesterday, just to gloat about the time he hid BOTH my baskets in the kitchen cabinet. As a seven year old, I was eye level with the cereals which is right where basket one was tucked, but that dastardly old man had the gall to hide my second basket in the same cabinet merely hanging on the door, right above my head, hidden in plain sight. My mom has a great photo of me staring blankly into the cabinet with said basket dangling over my head, mocking me.

After that we would go to church which was a dreadful Catholic mass. It was the long version of church (stole that term from Mike), with extra songs and extra bullshit. I loathed Easter church. It was usually a brutal 90 minutes which is like nine years to a kid.

Next we would come home for brunch. My dad would usually fry us up some more eggs (egg farts a plenty for the post Easter week), and my brothers and I would dick around for a few hours, usually rechecking spots for hidden eggs. It was always great, like a month later, when one of us would find an overlooked mashed hard boiled egg from between the couch cushions.

Finally we’d head over to Grandma and Grandpa’s house. Yes, I call them that, and not something ridiculous like Peepaw and Meemaw or Boompa and Nana. I’m not a psychopath. Anyway, It was always a fun time. We would eat snacks, play ball, fight ferociously over plastic eggs with nickels in them, and then eat ham and drink five sodas.

I have some great memories of Easter Sunday. I will always remember those late March Sunday gatherings fondly, hanging out with relatives I don’t often see, playing with my cousins, and sometimes we’d get a third candy basket from Grandma… AND if it was an extra special day (whatever that meant) Grandpa would let us take a handful of pennies out of his penny jar. Each grand kid under 10 got one crane style grab with one hand into this jug of pennies he had been keeping for decades. If you were lucky, you could get about fifty cents. The cousins still talk about those penny grabs, and we often jokingly demand Grandpa brings them back. Truth be told, I’m just goddam happy I still have a grandpa. I called him yesterday. He’s 87 and he still speaks and hears great. We talked for about 30 minutes. He’s just as sharp as ever, and he never misses a beat… “You know you’d be more successful getting a job without that beard…” Yes, Grandpa. He’s right ya know.

I no longer live near my relatives or I’d still be attending those events but as an atheist. Not that it would matter much. My family never really talked about religion. Church and religion were just the stupid parts we had to get out of the way so we could eat candy and play. Being an atheist now basically means I get to have all the fun of Easter, without the horrible church segment, which would be kind of like WWE Monday Night Raw without the horrible talking segments.

However, yesterday was a very different Easter for me, and it has nothing to do with religion.

I have a therapy dog. His name is Hendo. We go to schools and hospitals and where ever someone needs the love of a dog. His job is to be a good boy and be petted; no dog does it better than my special buddy. Our newest assignment is a retirement community. We’ve been going there each Sunday for a while now. Yesterday, we went to the Alzheimers and Dementia ward which is basically hospice care. The people there are waiting to die. Yesterday they were waiting for family that never came. These are the people that we have truly cast aside. There is no Easter event for them.

My dog is special. His name is Hendo and he’s amazing. Everyone says this dog is amazing, and he is. He’s woken me up twice when the smoke alarm was going off somewhere in the house, and just last week he thwarted a potential burglar. He loves everyone, never barks, never bites, and loves to be petted. I had to have him tested to become a therapy dog, and the testing lady came back and said, “We see some truly amazing dogs in this program, but your dog is… exceptional.” And that’s exactly how I’d describe him, but this is not the point. The point is that I realize not everyone has a dog like mine or an opportunity to do what I do, but we all can do more. 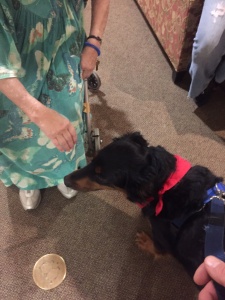 I volunteer to take my therapy dog to a location that most people actively avoid. I put myself in a setting that most people can’t handle and find depressing. I spend time with total strangers who are not long for this world, with not much brain capacity left… and it’s more rewarding than any stupid back yard cook out or family gathering. It’s actually doing something.

Hendo and I have only been going there for about a month, but each time he shows up, the eyes on those dying people just come to life. It’s miraculous really. From the staff, to the residents, to me, and even to Hendo, I know we are all touched by the emotion of the mere 90 minutes we spend together each Sunday. Hendo always comes home after these visits completely zonked out, as am I. From one human to another, I say this with the utmost honesty, every time I walk away from that facility, I cry. 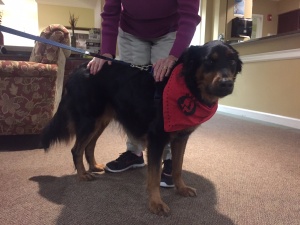 Fuck your Jesus. He never saved anyone. Fuck your religion and it’s bullshit origin story that denies the truth of scientific discovery. Fuck your church with its sanctimonious tradition and indoctrination. Fuck your religious leaders with their arrogance to pretend that they know the will of god. Fuck anyone who believes that tithing is doing anything more than paying into the pedophile cover up fund. Fuck your afterlife, this life is all we got. Fuck your salvation. The soul does not exist. Finally, fuck anyone who pretends to do something by praying. Fuck religion.

Do you want to have a religious experience? Do you really want to know what it is to save someone? Do you want to make a real difference in someone’s life? Go volunteer with the elderly. Go there and talk with them. You don’t have to have a Hendo to do something real. Quit being a pious pompous do nothing dick wad that thinks because you tithe that you’re covered. You’re not. Tithing is just as bad as murder in my book. You’re paying into the greatest pyramid scheme of all time. You’re literally giving your money to rich people who are con artists. It’s foolish. It’s insane. It’s dangerous. Remember, we are all born atheists, and stay that way until someone starts lying to us.

If you want to meet god, go find him. Don’t bother to look for god in a church, in a school, or on a sports team. God is in the places you REALLY don’t want to go… in our slums and homeless shelters… in our hospitals and hospice care… in our special needs schools… in our orphanages and foster homes. Caring for others, that’s god, and you don’t have to believe the earth is six thousand years old to experience it.

I have a lot of fond memories of Easter, and I’d trade them all for more experiences like the one I had yesterday, free from religion. Am I bragging? You may find some bragadocity in this article, but you’re missing the point. Easter is not about me, or Jesus, or Hendo, or family gatherings, it should be about caring for others which is what Jesus supposedly taught. How many Xtians do you know that volunteer for others? This atheist does.