by Dazza
in Movie Reviews, Movies
0

Star Trek, Hart to Hart, Knight Rider, Dynasty what did these shows have in common? Apart from that I spent too much time watching them as a kid instead of being outside drinking cider in graveyards learning the facts of life with rough females.

Answer: they all had doppelgänger episodes, a cliché plot device where one of the regular actors or actresses would play two roles, normally introducing a character who was the complete opposite to the one we were used to. It was a well used gimmick and was often pulled often quite clumsily, with crude special effects resulting in one of the two lumbered with a fuzzy outline whenever the two shared the screen at all.

Well, if today’s special effects can make dinosaurs and alien invasions look scarily realistic it stands to reason than having one actor appear twice on the same screen seamlessly is going to be a piece of cake. So much so that when watching Legend you really lose yourself and forget that you are watching Tom Hardy play both roles of Reggie and Ronnie Kray, London’s own Al Capone.

For the benefit of those overseas who may be unfamiliar with the Krays and who are reading this Legend Movie Review, the twin brothers have come to be regarded as national treasures over here. That is if your idea of national treasures is a couple of ruthless psychopaths who violently extorted money and ruled the London Underworld with fear.

There is a curious romanticism afforded to gangsters like The Krays, maybe through the mythology and glamour of the charming rogue that movies and television have had us believing inhabit the criminal world. To many in the Eastend of London the Krays were gentleman of crime, even the slaying of rival gangster George Cornell by Ron and Jack “the Hat” Mcvitie are forgiven with the often distributed myth that the Krays abided by a code of honour where they only harmed other criminals. Adoring crowds lined the roads for their funeral processions giving them the kind of send offs normally reserved for the Royal family, to the Eastend they were after all royalty.

Tom Hardy is so brilliant in the two roles that you buy into the illusion you’re watching two different people, down as much to his diverse performances as it is the flawless editing. His Reggie is the slick, cool, charming playboy almost like a member of the Rat pack. While Ronnie is absolutely terrifying, his eyes wild with menace in a seething portrayal of insanity. It’s an exaggerated interpretation on the reputation the Krays had where Reggie was the level-headed professional while Ron was the loose cannon, revelling in their violence and notoriety.

How much is this an accurate representation of the real life Krays is open to scepticism. Tom Hardy’s magnetism can’t help but glamorise and make the Krays somewhat appealing, even during their thuggish behaviour as they cement their power over London. Ronnie, despite his sadistic love of violence also draws the laughs through his sometimes inadvertent wise cracking. At times you’re waiting for him to steal the scene from, well himself!

Early on when the twins are drawn into meeting with rival gang the sadistic Richardsons which proves to be an ambush their response is with all the bravado and cool of a Clint Eastwood western. In this scene you can’t help but root for them as they fight against superior odds and an even more cruel and psychotic enemy in the “torture gang”

Make no mistake, this film is very much a showcase for Tom Hardy’s skills and sex appeal. Although it sticks close to true events (naturally there are liberties taken for the sake of drama) it adds little to the story of the Krays, as in 1990 the real brothers Gary and Martin Kemp (from a British pop band called Spandeu Ballet) starred in a film on the Krays that had a grittier, more downbeat tone and was probably a fairer representation of the brothers.

That film also included more on the Krays background and early life which was lacking here, as the film skips their early life and begins with Reggie’s meeting and courtship of Frances Shea (played with heartbreaking innocence by Emily Browning) who was driven to depression through her abusive marriage and eventual suicide. It’s this relationship that drives the films narrative, she being the innocent caught in the life of crime where she doesn’t belong, the potential salvation that Reggie rejects and ultimately her tragic end is the tipping point in Reggie’s downfall. 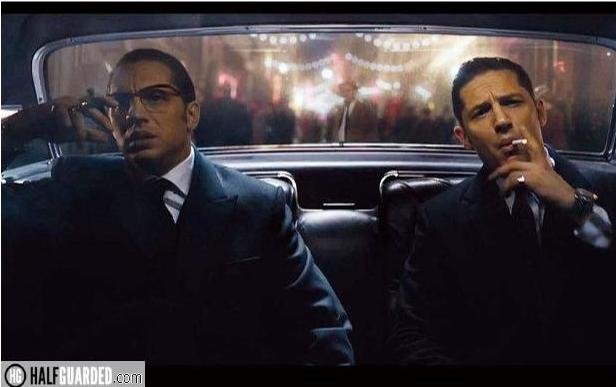 Curiously underplayed is the role of the Krays’ mum, who’s doting over the boys and inability to see wrong in them gave free reign to explore their savage nature from an early age. The important players in this drama are the triangle of Reg, Ron and Frances and the conflict that erupts between all three with the tug on Reg to either go straight or continuing his life of crime.

Anyone wanting the definitive Goodfellas style epic biopic will be disappointed. The film ends abruptly following Mcvetie’s murder leaving their trial and 30 years in prison an untold story. Like it’s title suggest the film focuses and panders to the mythology surrounding the Krays. The working class Eastend heroes who looked after their own, kept the streets clean for the ordinary citizens and who’s crimes only harmed fellow gangsters. Though in this respect it’s no different to films like the Godfather. 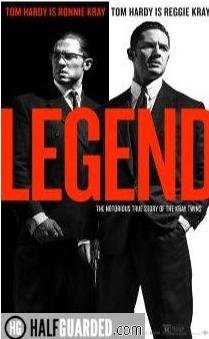 Legend does not touch my favourite gangster films such as Long Good Friday, Godfather or Goodfellas, but it certainly is at the front of the pursuing pack, if nothing else for the Marvellous performances of Tom Hardy.

Incidentally quite a few of my female friends seemed rather excited by the prospect of two Tom Hardy’s on the screen at the same time. I don’t know what it says about them when you see the terrifying portrayal of Ronnie, but then again you see how Hardy looks in that suit as Reg and well I can’t blame em. I mean, I’m straight and even I’m not sure I’d kick that out of bed.

And on that bombshell