Trump Finally Convinces Mexico To Pay For The… Wahlburger’s

President Donald Trump announced that he will keep his biggest promise from his 2016 campaign as he has finally convinced Mexico to pay for the Whalburger’s he wants as his last meal in the White House on January 19th.

“BIG NEWS! As I promised, Mexico has agreed to pay for the Wahlburgers I will have on January 19th for my final White House Din Din!!! I TOLD YOU GUYS!!No illegals in America! Just delicious Marky Mark burgers in my tummy! I’ll be giving The Oval Office toilet my good vibrations!” 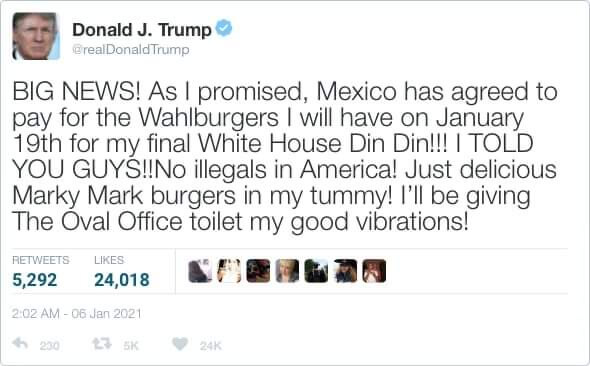 Mexican President Andrés Manuel López Obrador said he agreed to these terms because he felt bad for the “pequeño idiota naranja” (little orange moron) and since the Mexican people are a forgiving people, he will spring for “comida feliz del chico gordo.” (fat boy’s happy meal)

“Joe Biden could never get Mexico to agree to pay for Wahlburger’s. It’s high end stuff. He could maybe get them to buy cheap crap like Burger King, who got rid of my favorite, the Rodeo Burger! I hate Burger King!”

One of President Trump’s advisors then notified him that the Rodeo Burger was reintroduced in 2013 as part of Burger King’s value menu. The president replied “OOOHHHH” and promptly left the press conference. He was spotted at a D.C. Burger King 15 minutes later eating a tray of rodeo burgers and throwing the balled up wrappers at children in the ball pit.

Fight the Law and Change the World