Colin Kaepernick Hates America (And I’m Cool With That)

by JSwift
in The Other Half
1

In the United States of America, we’ve got this thing called “the First Amendment.” Effectively, it means, as citizens, we can say whatever we want without having to worry about the government putting us in jail.

Granted, the Supreme Court of the United States has determined that our Constitutionally-protected right to free expression is not an unlimited one. That means we can’t publish and distribute obscene material (and if you’re wondering what “obscene” means legally, even the U.S. high court can’t tell you), or infringe upon copyright laws, or promote anything that encourages “seditious” behavior or say anything that would bring about “imminent lawless action.” Oh, and we can’t violate gag orders or release illegally-obtained documents or defame someone with “intentional malice” in our hearts, either. Or publish the names of rape victims, or protest on private property or defraud consumers with misleading advertising claims or use the likeness of “public figures” for profit without their expressed consent. Oh, and if you are under the age of 18 and/or a public employee, you have even less free expression rights than that.

OK, so maybe we, as citizens, don’t have as much freedom of expression as we think (or like to think) we have. Still, the First Amendment generally keeps us from being imprisoned for fostering unpopular beliefs, and as long as you steer clear of directly promoting violence, sexual debauchery and/or other crimes against a specific individual (at a specific place, a specific time and in a specific manner), you probably won’t have to worry too much about your advocacy of whatever getting you tossed in the slammer.

Alas, there is a HUGE loophole when it comes to free expression in these United States. You see, although the Constitution ensures the government can’t silence us (the technical term is called “prior restraint,” and you should know as much about it as you can), there is absolutely NOTHING on the books safeguarding us from public censorship.

The First Amendment protects us from being imprisoned for believing what we believe, but it won’t protect us from losing our jobs because our employers don’t like our political or social ideologies. Nor does the First Amendment safeguard students from being tossed out of clubs, denied scholarships and work-study opportunities or receiving a failing grade simply because the upper brass doesn’t like the cut of their jib – no matter how incontestably factual whatever he or she believes. And the First Amendment certainly doesn’t prevent us from being blackballed from certain industries, or denied housing, or refused service or generally treated unfairly by society at large simply because what we feel to be true runs contra to whatever the prevailing cultural attitude in the locale may be.

Which brings us to the curious case of Colin Kaepernick.

For those not in the know, Kaepernick is/was the starting quarterback for the San Francisco 49ers. In 2012, he subbed for starter Alex Smith when he got injured and led the team to a Super Bowl. He had a pretty good season in 2013, but he started to go downhill in 2014. In 2015, his performance was so bad, he wound up getting benched and replaced by a dude named Blaine Gabbert – who, fundamentally, is the absolute whitest person you could ever possibly imagine.

Heading into the 2016 season, Kaepernick was pretty much guaranteed to be relegated to backup status. That’s not really a bad deal, seeing as how he signed a six-year $114 million contract with the Niners in 2014, of which he is guaranteed $61 million no matter what.

In other words? Colin is expected to earn nearly $16 million this year, whether or not he even takes a single snap. From the get-go, it’s a little hard to consider him a sympathetic figure, in any regard.

So, about halfway through the NFL preseason, Colin started telling everybody he wasn’t going to stand for the National Anthem no more because, to him, it’s hypocritical to salute a country that marginalizes minorities and has so much police violence. Now, as to whether these are statistically verified factual statements or mere opinion based upon generalized empirical observation doesn’t matter. Colin – no matter how arbitrary, disconnected or fuzzy his logic may be – nonetheless has a basic right to believe, and espouse, whatever he feels is the truth.

Some people, like Kareem Abdul-Jabbar, came out to support Colin. No surprise there.

Other people, including NFL Hall of Famer Jerry Rice, criticized Colin. Again, no surprise there.

What gets me, however, is how unbelievably hypocritical both Colin’s supporters and detractors are. Why is it that public censorship is a bad thing when it’s something you like being criticized, but a completely legitimate form of “democracy in action” when the masses are tearing apart people saying stuff you don’t want to hear?

The people who are backing Colin, unsurprisingly, tend to come from a more progressive, social justice warrior background. While they are rallying the troops to support and defend Colin in the face of public scrutiny and hailing him as a hero for speaking his mind, at the very same time they are ENDLESSLY berating, condemning and seeking to stamp out anyone porting an “alt right” worldview. Colin criticizing the police state and white privilege is an A-OK example of free expression, but when Donald Trump supporters espouse tighter immigration legislation or Gavin McInnes fans chastise pro-LGBT groups for being thin-skinned, that same “free expression” suddenly transforms into inexcusable “hate speech” that needs to be heavily penalized … if not in a court of law, the court of public opinion.

Similarly, the people criticizing Colin tend to come from more neo-conservative and quasi-libertarian backgrounds. They attack him for slandering the troops and symbolically spitting on an emblem they hold dear and consider him an ideological menace because he dares to wear shirts emblazoned with the visage of Che Guevara on them at press conferences. But then again, these same people take great offense to Black Lives Matter protesters rallying behind their ideological beliefs and members of the LGBT community waving the symbolic representation of their political ideals in a public forum. And whenever the political Other takes offense to their remarks, they always hit them back with same old song and dance about how their globalist, “anti-Western” activist agendas represent grave, palpable threats to society itself while their crypto-racist chit-chat is freedom of expression personified.

Haven’t you folks ever heard the expression “agree to disagree?” What has happened to American culture over the last five or so years to make ideologues on the left and the right so damn oppositional and hostile to the existence of competing, antithetical viewpoints? Rather than let others foster their own perspectives – as incompatible with yours they may be – the new-wave political crusaders aren’t satisfied until the other side pays for daring to see things differently. Not only are you not allowed to have a different opinion, the new political order now goes, you have to be publicly condemned for going against us and what we believe. 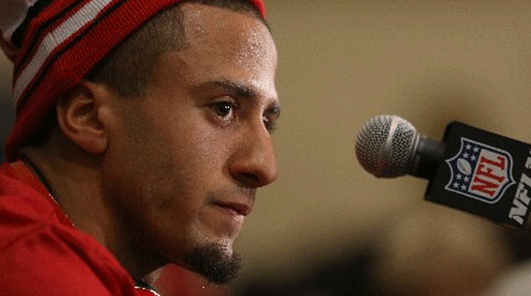 This whole Kaepernick kerfuffle is but just another flashpoint in the great, ongoing American Culture War, with quasi-racist right-wing nationalists and quasi-fascist left-wing globalists each trying to toss more gasoline on the tire fire than the other side. Colin, who is extremely unlikely to play a single set of meaningful downs all season long, is nothing more than another fluffed up made-for-Facebook controversy intended to whip the faithful on both sides of the traditionalist/progressivist tug-of-war into a tizzy. Yep, let’s politicize football, while we are at it. The BLM contingent now has an underdog hero to root for on Sundays while the Street Carnage set now has someone –  along with that dude on the Browns who didn’t get reprimanded for posting a cartoon of a cop having his throat slit open on social media – they can pray gets carted off the field with a career-ending injury. Everybody wins, and simultaneously, everybody loses.

As for me? I honestly don’t care what Colin Kaepernick thinks, one way or another. The way I see it, the guy can think, feel, preach, state, freestyle, tweet and macaroni art whatever he wants, just as long as he doesn’t demand that people who think differently ought not to have the same right to free expression he does.

Believing people ought to be able to share the same inherent freedoms you do, regardless of personal beliefs, and at the same time, refusing to prohibit others from exercising the same rights and liberties you do simply because you don’t like what they are exalting and extolling?

It’s a strange idea, I know, but I’m telling you – if we gave it a shot, we might just walk away a more civil union in the process. 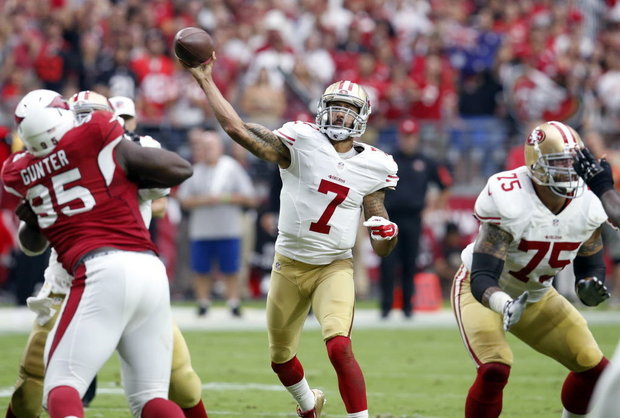