He should go away at this point.  He won’t, of course, but McGregor has managed to go from folk hero to annoying whiner in the span of like two weeks.  His latest are the following: 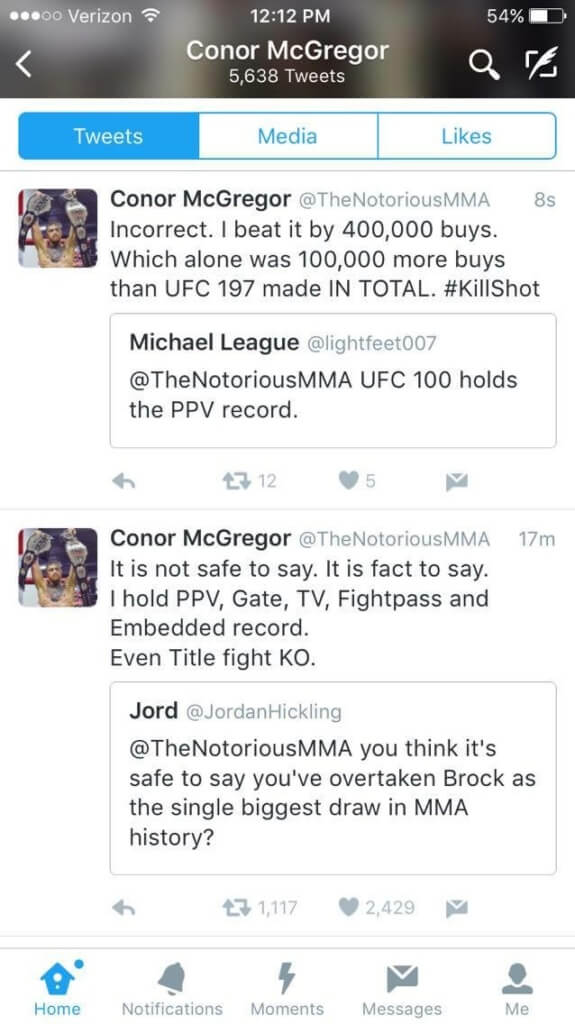 Right, you lying mic (I’m part Irish so I can say it).  You did north of two million buys fighting Nate Diaz.  Sure.  And you were targeting Pac v Mayweather numbers too.  Suuuuuuuuure.  Look, I love me some UFC, and UFC 200 is gonna be huge, and the rematch of Conor losing in 7 minutes would’ve been huge, but let’s not go crazy here.  Of course, he’s also the same guy that claims he generated $400 million for the UFC in the span of three fights – when the company publicly said they grossed $600m last year.  ($400m is 16m PPV buys, btw.)

How can a professional fighter say this?  It’s pounded into every boxer, wrestler, and jiu-jitsu artists’ head from day one: technique will save you if you’re tired.  It’s the guys who don’t have technique that are screwed because they end up using muscle for everything, get tired, and can’t do anything.  But if you’re super tired, yet have great technique, you’ll survive.  You may not thrive, you may not win, but you’re in a better place than most.

Which is to say nothing of the fact that a guy who is a “super hard worker” gassed out in under 10 minutes.  Chad Mendes lasted longer and he was coming off short notice.  Sure, Nate is bigger but he isn’t a wrestler, he wasn’t leaning on McGregor the entire time.  No.  What happened was someone pushed back and Conor didn’t react well.  He found out his power didn’t translate like he figured and couldn’t psyche out Diaz.  Then, on the ground: Diaz is awesome and Conor isn’t.  Yes, Conor did well enough on the mat, sure, but when he was tired his technique wasn’t there and he panicked.  He didn’t just get beat by a better guy, he looked for a way out.  Nate is excellent but he isn’t that great on the ground.  McGregor was gassed, for whatever reason, and didn’t know what to do.

And so he lost.

Now he’s running around, after realizing that UFC 200 is going to be a GIANT show, even without him, and doesn’t seem to know what to do.  He still thinks he can get the UFC to give in to his demands or something.  The only difference between his fight with Nate and his fight with Dana and Co. is that he doesn’t know he’s lost against the latter.

So, please, just shut up for a bit.  You’re losing sympathy left and right and are frankly just tarnishing your reputation.  No one wants to support a whiner.  What they want is to support the entertaining Conor who talked a lot and fought all kinds of people and immediately after losing just admitted defeat and showed a little class.  This current Twitter Conor is a guy screaming “ME ME ME” and making excuses.

Unless, of course, he doesn’t really want to fight Nate because he knows history often repeats itself and no one would be surprised this time…