Is Super Bowl 50 the beginning of the end?

And so Super Bowl 50 shall be the Denver Broncos vs the Carolina Panthers. Be prepared for the attention paid to be a great deal more than the usual Super Bowl hype. While the game is obviously a unique cultural experience, one of the few remaining events where everyone in America pays attention, this may be its peak. In may be the Wrestlemania 17 of football.

Wrestlemania 17 was the most successful show in WWE (nee WWF) history at the time. It was the culmination of years of being the hottest product in the media and had Steve Austin and The Rock wrestle in the main-event. The two biggest stars of modern wrestling, in front of tens of thousands of people, headlining a card that top to bottom was one great match after another. And ‘Mania 17 even wrapped up the most repeated, but at that time revolutionary storyline, of all time: Austin vs McMahon. In the main-event, Austin turned his back on the fans, embraced his longtime foil, and the “Everyday Blue Collar, Beer Drinking, Swearing, Redneck” sold out to The Man.

Fans didn’t like that. The show truly was the beginning of the end of the WWE Boom Period. Super Bowl 50 may be the same.

We have in Super Bowl 50 a game that has all the makings of being a watershed moment for America, good or bad. There are so many different storylines emerging and they’ll cover every angle you can imagine.

Peyton Manning vs Cam Newton. Manning is the most prototypical QB of all time. He’s white, immobile (even in his prime), and valued for his intelligence and leadership skills. He’s famous for basically running the entire offense and is legitimately respected for his Rainman-like knowledge of defensive schemes. He’s friendly, smiles, never says the wrong thing, and can be accused of HGH use and it just floats off into the ether, never again to be addressed. When they write movies and TV shows with a QB, he’s the guy everyone thinks of.

Cam Netwon is the stereotypical “black QB.” His physical gifts are immediately apparent. He isn’t a fragile QB, one needing a strong offensive line for protection, he’s a mountain of a man; a 6’5, 250 lb freak who dwarfs half of the defensive players on the field. As the stereotype goes, he’s able to compete, not because of his mind, but because of his body. He can run through or around anyone and has an arm loaded with so much strength that he seemingly flicks his wrist and the ball flies the length of the field.

And, unlike his counterpart, Netwon is all about flash. He dances. He smiles broadly and proudly. He isn’t quiet or boring, he’s an NBA player in a league that does everything it can to discourage outward signs of emotion. Where every other QB is expected to fake a sheepish, “Well, we just went out there and did the right thing and executed” Newton runs around the field, high fiving all of the fans, ripping up opposing teams signs if they’re in the Panthers’ stadium, and does a mock Superman pose when he scores.

Forget the nuanced reality of each man, that Manning was blessed for years with physical gifts and that Newton isn’t an idiot, that he’s learned over the past few years when to take chances and when not, the narrative is all that matters. When the viewership and interest of the Super Bowl is quite literally almost 10 times that of a normal game, broad strokes are how the canvas is painted.

Along the same lines as race, the Old School vs New School way of thinking is at stake. Pocket passer vs running QB; entrenched franchise in Denver vs a Carolina team donning teal blue that still screams, “We were an expansion team in the 90s.” This is a 50 year old team vs a 20 year old team; your dad vs you. 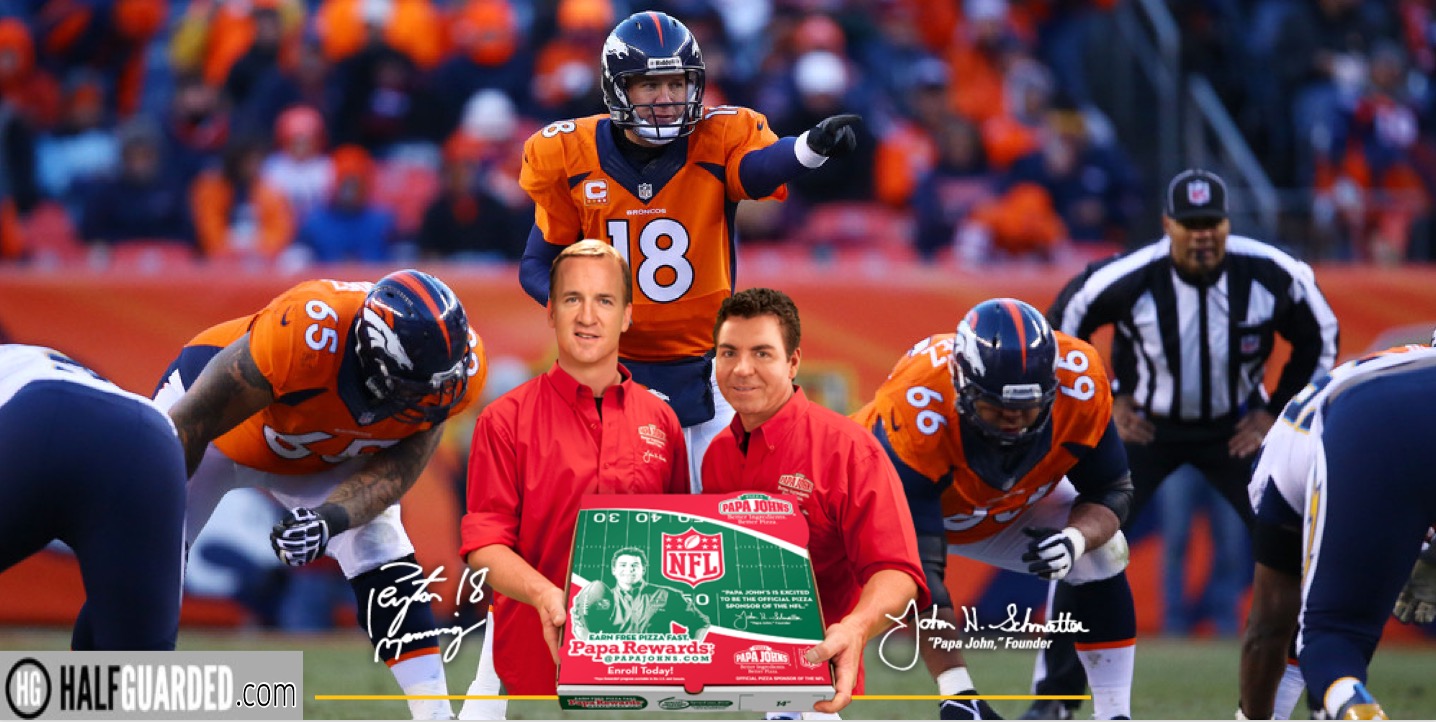 Plus, there’s the sentimental factor in Manning’s favor. He’s won a Super Bowl, so he doesn’t have that monkey on his back, but with this being his last year (please let it be his last year – he could die if he plays again), the aging QB, digging down one last time to be magical and win it all is too good of a storyline. With Brady, Breese, and his other contemporaries nearer the end than the beginning of their careers, Manning represents a golden age of quarterbacks. He’s Clint Eastwood in Unforgiven: the old gunslinger back for one last hurrah.

Newton is the emerging star. Always expected to do great things, he finally put it together lead the Panthers to a one loss season and a dominating post-season (so far). All of the showmanship he displays is perfect for the young generation of fans. The NFL hates individuality and he’s the ultimate individual. If a player is likely to take a selfie, it’s Newton. Hell, he even wears #1! A Panthers win is the symbolic passing of the torch. 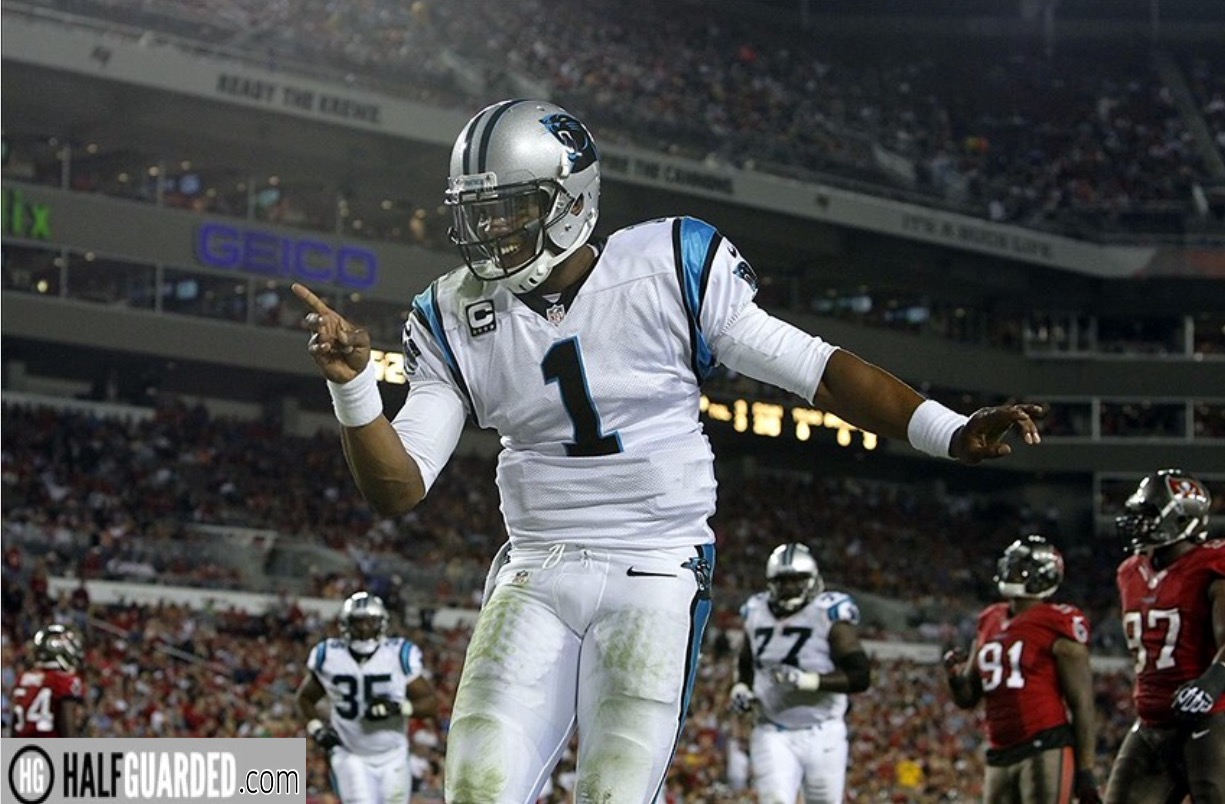 All the attention will be on the two QBs as stand-ins for whatever point someone wants to make but the truth is that it is the defenses of both teams that has gotten them this far. Denver in particular isn’t running out a prime Manning; he’s basically a mummy who occasionally tricks people because he knows everything to do. And Newton has gotten plenty of MVP talk, but his numbers aren’t all that great. Per ESPN, whether one uses traditional QB Ratings or the weird QBR thingy they have, Newton isn’t a top 5 QB and is barely top 10. Heck, by the advanced stats of Football Outsiders, Newton isn’t top 10 – he’s even behind Jay Cutler (which as a Bears fan feels imposible.)  But, looking at Football Outsiders DVOA (nerd stat, but a good one), Denver and Carolina are one and two on defense. Super Bowl 50 could end up 9-6 and only casual fans will be surprised.

There will be plenty of people desperate to paint Super Bowl 50 has a referendum on so many different things. Those who want Manning to show how it “should be gone.” Those who want Newton to win to show those who like Manning that it’s a new day and age. Thinly veiled racism; cries about thinly veiled racism; cries about the cries, and so on. Race, power, money, sport related injuries, any and every angle that can be imagined will be on full display at Superbowl 50.

And maybe this is the tipping point. It’s a game that is already increasingly coming under scrutiny from people who wonder if they’d let their kids play due to the concussion issues. The more the public becomes aware of players on non-guaranteed contracts being suspended for smoking pot but not for faking their way through the concussion protocol tests the more it feels like a sick exploitation of human lives. And with each new billion dollar stadium built with tax payer’s money, there’s just a little bit more resentment. It’s a game that was once only on Sundays to one that is on half the days of the week now, with no sign of any change.

For all intents and purposes, Super Bowl 50 will be the biggest Super Bowl of all time. It will make more money than ever and it wouldn’t be surprising if it does record ratings. But sometimes a new high is also the final peak of the mountain and all that remains is to go down.