News of George Herbert Walker Bush’s death has taken a great toll on our country. Millions have mourned and reflected on not only his achievements as President and Vice President, but also as a war hero and director of the CIA.

President Trump has said to have taken the news harder than many thought given his rocky relationship with the Bush family ever since the 2016 campaign where he was pitted against George’s son Jeb.

The reason behind Trump’s grieving was made more apparent when he addressed the media:

“Sad day for Americans. Our 41st President has passed and now I don’t know who can cover up Mueller’s death now. He did such a fantastic job with covering up JFK’s death when he was running the CIA. They don’t make em like that anymore, today’s CIA and FBI could barely cover up their own bad breath. They need to floss and brush like I do, 7 times a day, up and down not across.”

“I know, it was an accident. I never said murder.”

“A. He’s not dead and B. You absolutely said murder.”

“Yeah, it was an “ACCIDENT” now you see what I’m saying.”

“So you’re going to have Robert Mueller murdered and try to cover it up in order to look like an accident?”

“And due to President Bush’s death you’re not sure who can cover it up well for you?” 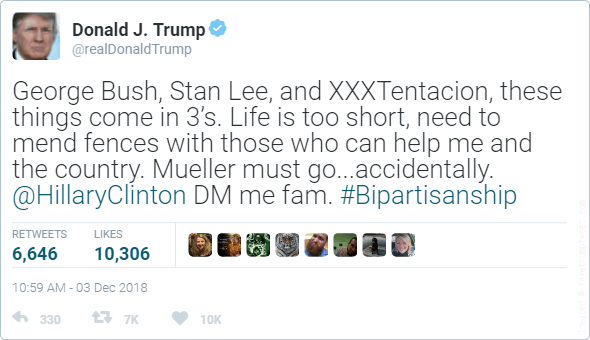 “George Bush, Stan Lee, and XXXTentacion, these things come in 3’s. Life is too short, need to mend fences with those who can help me and the country. Mueller must go…accidentally. @HillaryClinton DM me fam. #Bipartisanship”