As Brad Sherman and two other Democrats reintroduced the idea of impeaching President Donald Trump on Thursday, Trump took to Twitter to warn Americans of what an impeachment and conviction would mean for the country. 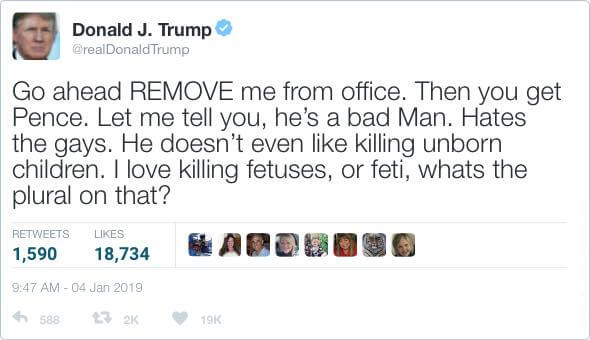 “Go ahead REMOVE me from office. Then you get Pence. Let me tell you, he’s a bad Man. Hates the gays. He doesn’t even like killing unborn children. I love killing fetuses, or feti, whats the plural on that?”

It seems Trump is panicking and doing anything he can to avoid impeachment and a disgraced presidency. He continued on Twitter… 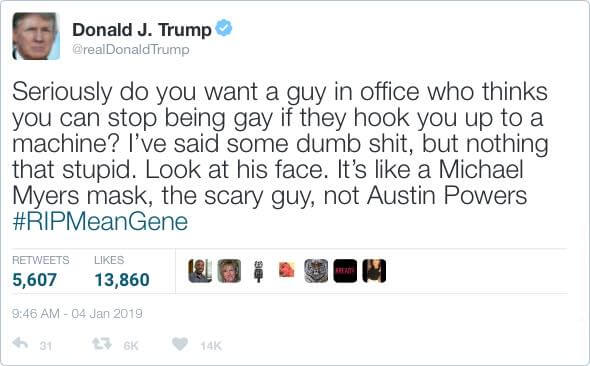 “Seriously do you want a guy in office who thinks you can stop being gay if they hook you up to a machine? I’ve said some dumb shit, but nothing that stupid. Look at his face. It’s like a Michael Myers mask, the scary guy, not Austin Powers #RIPMeanGene”

I can’t say I disagree with Trump. Pence is a scary far right “Christian” republican who looks like he just murdered a non believing child that morning with no remorse. Trump had one last tweet… 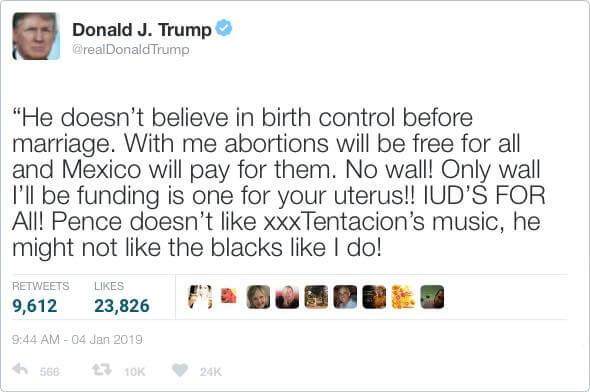 “He doesn’t believe in birth control before marriage. With me abortions will be free for all and Mexico will pay for them. No wall! Only wall I’ll be funding is one for your uterus!! IUD’S FOR All! Pence doesn’t like xxxTentacion’s music, he might not like the blacks like I do!”

Nancy Pelosi wants a wait and see attitude toward impeachment depending on the Mueller report results. So Trump and America can rest easy for now that Mike Pence will not be president any time soon. Seriously, imagine what he looks like fucking his wife? Missionary position only, very determined face, a quick smirk upon ejaculating, then he flips on the 700 club and enjoys a delicious grilled puppy sandwich. 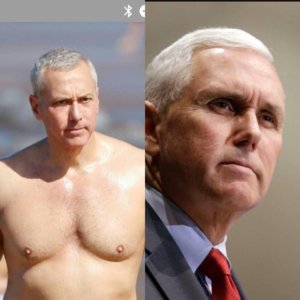 Trump: “ There Was No Quid Pro Quo! I Don’t Even Like Chinese Food!”

A Visit from St. Nicholas

A Visit from St. Nicholas