Music has been with us since the world’s first percussionist debuted in a dark cave, someone unrecognizably human by our standards, rhythmically slapping their hands on a rock. We have fought wars to its rhythm and made love having been seduced by the same. And over time we’ve sought new ways to make music; innovated methods to express something from deep within.

From those stone drums to modern computer generated melodies, we have continually sought new ways to make others hear aloud what we hear inside. Somewhere along the line, we began developing instruments made of string. The cello. The violin. Seemingly innocuous, yet with a guilty foundation akin to a country built upon the conquered’s bones.

The cello’s shape and place in the instrumental family labels it a giant violin to many; which is like saying that a condor is a giant hummingbird.

A cello is hardly a “giant violin.” Its deeper, darker pitch requires concentrated and unwavering thought and control from the cellist. The sheer physical size of a cello means that where his little sister the violin requires nimble fingers, he demands a strong body. A cello needs the legs sturdy, the midsection taught, and the entirety of both arms in play. Where the hands play the violin the cello is played by the body.

This is to take nothing away from the violin, with its potential for bleeding-finger dexterity. The violin is a midwife delivering raw emotion. The split-second difference in the time it takes to draw a bow across a violin compared to the cello gives rise to her unfiltered expression.

Where a cellist can be prone to over-thinking and approaching with caution, knowing the notes will linger longer, the violinist shrugs her tool closely, flitting from one note to another at the speed of thought, hopping past mistakes that disappear into the ether before they’re ever noticed. A cello is slower, more deliberate, more mature; the violin a source of bursting nascent creativity. 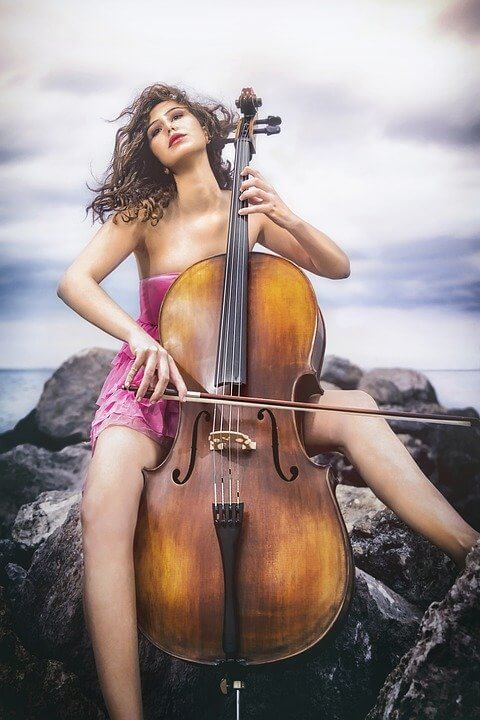 Both the cello and violin, along with many of their stringed cousins, carry basic characteristics: a body (or belly), a neck, and strings. Like man, the body and neck exist to help the strings, the vocal chords, create their sounds. Strings, fashioned of catgut: so durable, yet in need of constant tuning, of constant perfecting.

Whilst modern strings are made of metal, aluminum and titanium amongst others, for centuries they were animal intestines – catgut. Contrary to popular belief, cats were not the source of catgut, but rather goats. The bridge between man and music, made from the remains of an animal.

Searching for just the right way to free a sound only known in his head, man doubtlessly tried one material after another. Hair, grass, wool – anything that could be fashioned into a stringly approximation – was at one time or another strung, I’m sure. It must have been madness for the composer to search for just the right tool.

A goat was killed and guts ripped with the casualness of pulling weeds. Those innards then stretched taught to the point of almost snapping, wrapped, tightened, tuned, and then plucked. Over time, one musician after another no doubt ran her fingers over those remains without giving a second thought to their origin. And something wonderful resulted.

Surely no one listened to a goat and thought, “That’s it! That is the sound!” But it still came to pass. Somehow. By accident? Divine intervention? Domesticated for 10,000 years, a goat’s offspring are called kids, they have a place on the Chinese zodiac calendar, pulled Thor’s chariot, and were a clean animal by Jewish tradition. Christ even called his followers goats. But its butchering revealed the final source of relief for the anguished musician hunting for his perfect sound. The sacred slaughtered for Stradivarius.

Is this Man at his worst? Killing the holy to make us happy. Best able to enjoy life after first murdering; dismemberment our end’s most satisfactory means. To play music that can move us to tears, that can fill our lives with purpose, to connect us all in ways unspoken. And all it required was not just the sacrifice of an every day animal, but the dissection of the very organs (pardon the pun) that once enabled its life. Obliviousness to terror in the face of creating joy.

Or: is this Man at his best? Salvaging from death something so meaningful. The goat was always going to die. All things die. This is something that must be accepted. But rather than simply fade and become again dust, man used that death to birth something that would last forever. We think of goats as being willing to eat anything; nature’s four-legged recycling center – making sure nothing goes to waste. How fitting then that man does the same. The discarded reborn.

Or: is this Man evolving to godhood? Fashioning from nothing something which shall last forever. When a natural disaster occurs, no matter how great its scale, we call such tragedies “Acts of God.” We don’t consider the Natural to be evil – if anything, an “Act of God” implies we somehow recognize an inherent Goodness. Is man simply acting on his natural impulse to free a melody; destroying nature as is needed to achieve his immortal end. Is the music that flows from the remains of the dead an Act of God?

If we can use death to create something eternal, we have conquered death. And who but God has dominion over death? Music kills Death and thus Man becomes God.

“God is dead. God remains dead. And we have killed him. How shall we, murderers of all murderers, console ourselves? That which was the holiest and mightiest of all that the world has yet possessed has bled to death under our knives. Who will wipe this blood off us? With what water could we purify ourselves? What festivals of atonement, what sacred games shall we need to invent? Is not the greatness of this deed too great for us? Must we not ourselves become gods simply to be worthy of it?” – Friedrich Nietzsche