Trump Says Kavanaugh Will Clear 7th Investigation By Incompetent And Once Stellar F.B.I. Who Suck At Their Job; Blames Hillary For Celebrity Deaths

President Trump spoke at me earlier regarding the decision to launch a 7th investigation into Supreme Court Nominee Brett Kavanaugh before a vote is taken next week. Things then took an odd turn.

“Thank you for sitting down with Halfguarded, Mr. President.”

“My pleasure, you’re the only real news on the internet.”

“Ok. What are your thoughts on the entire Judge Kavanaugh situation?”

“I’ve just launched our 7th investigation by the incompetent FBI for Judge Kavanaugh, a great man who will be exonerated by the stupid FBI who’s always up in my shit. They’ll do a great job here though.”

“You’ve condemned the FBI on several occasions, why are they suddenly reputable again and trustworthy because they’ve cleared Judge Kavanaugh 6 times already?”

“They did a wonderful job when I got what I wanted 6 times regarding Judge Kavanaugh. They’ll do a great job if he’s cleared. If they find him guilty of any kind of sexual wrong doing then they’re disgraceful and paid off by “Crooked Hillary” and the Dems. It’s that simple. My brain understands it, The Emperor of China gets it. Why don’t you get it?”

“Again with the fuckin Crooked Hillar….”

The President then stood up and attempted the “Floss” dance made popular by the video game Fortnite. He was better than I thought. Back to the interview.

“NO! YOU’RE A CHILD, SIR! As I was saying, Brett Kavanaugh will be remembered one day as a great Supreme Court Justice. The best, he grabs life by the pussy and makes things happen.”

“Couldn’t have used a poorer choice of words Mr. President.”

The president then went on to make fart noises as he left the interview chair ending the interview…. he’s flossing again….thank you for reading. 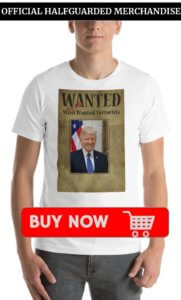