Sin City, Nevada, AMERICA, The Land of the Free and the Home of the Brave

A show without a main-event… Welcome one and all to our magical UFC 213 coverage. It was blessed by elves and faeries so you know it’s quality stuff.

You’ll find everything you need to know who what happened and all that. And then a bunch of stuff that didn’t happen. /Fake News Go with it. And vote too. KTHXBYE.

Pre-fight show on FS1 is absolutely burying dead Nunes. They’re ALL saying she should’ve fought, they made a point of Dana essentially calling her soft; it’s a massive public fuck you. 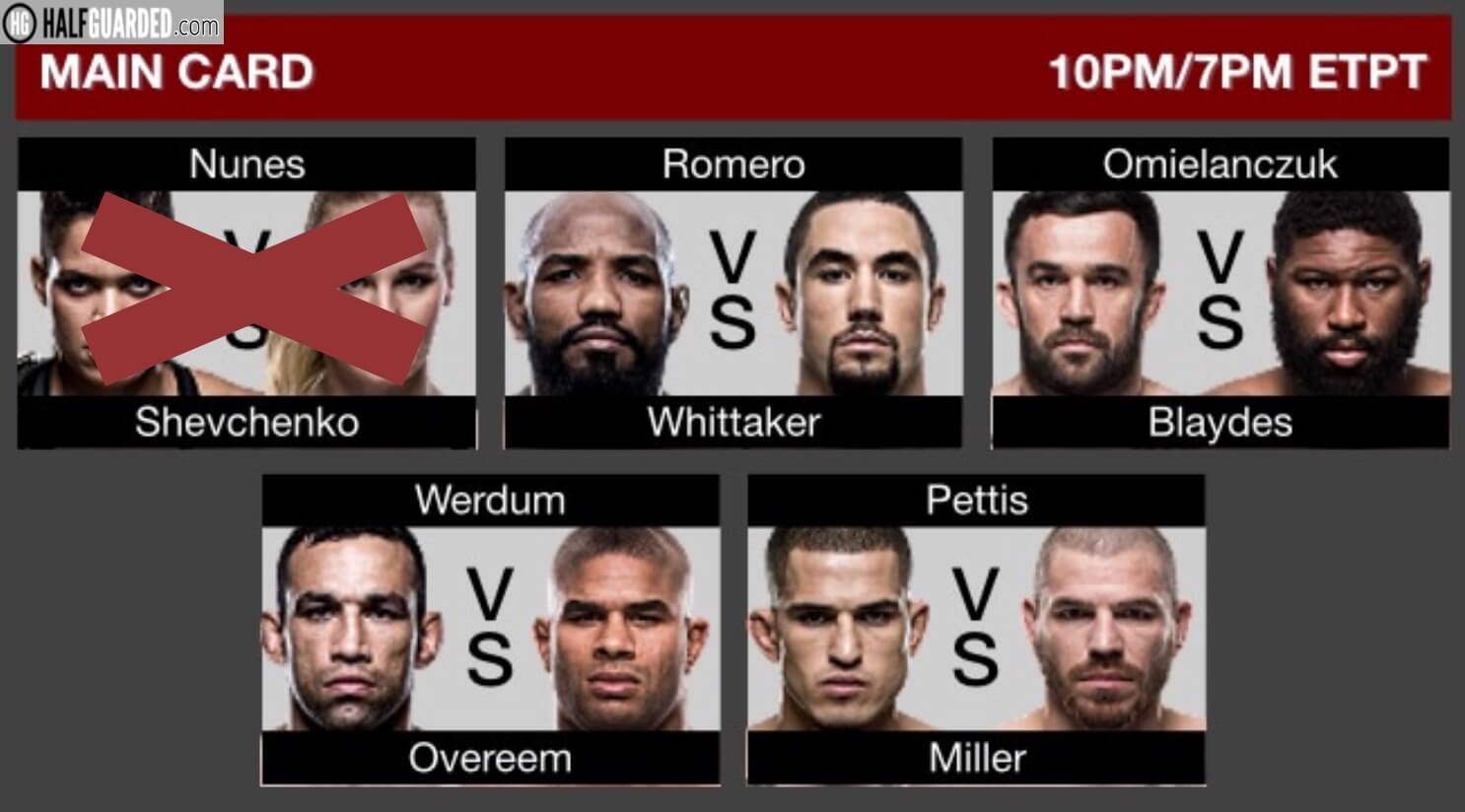 Nunes got a tummy ache and couldn’t fight.

– I can’t believe this is a main-event. Too many shows?
– Romero is what we’d all look like if Rob Liefeld were a god.
– Romero controlling through the first two. He’s using his wrestling to keep Whittaker off balance. Sometimes getting TD and riding it out for time. Whittaker hurt his lead left knee early in the first but despite telling his corner about it, hasn’t shown any ill effects as he fights.
– Whittaker wins the third after clipping Romero with a strike that forced the Cuban into a defensive shell for several minutes, looking gassed in the process.
– In between the third and fourth, Bisping was shown in the crowd ripping up the Cuban flag to taunt Romero. I’m in the 1980s and watching pro wrestling.
– Holy balls. In the fourth, Romero got a takedown and Whittaker tried all kinds of sit-outs and escapes and Romero just stayed glued to his back. It was magical bunny and unicorn levels cool. (For all of ten seconds.) Whittaker forces separation and they dance around an imaginary wall of separation. The almost Aussie began cracking the body with kicks, really messing up Romero. Mr. No Gay Jesus then ate thunder from Whittaker. Cuba’s own is hurt and barely hanging on till the end. Whittaker with a ton of momentum going into the fifth round that will determine the winner of this even fight.
– They’re both gassed. Whittaker with one front kick to the ribs after another. Romero gets hit, stops, then plods forward like a horror movie villain. Two minutes to go and anyone could win what turned out to be a HELLUVA fight. Three more kicks to the midsection. Romero slips and Whittaker pounces on top. This could easily win the fight. I feel confident saying it did, especially as Whittaker finished the last thirty seconds dropping skin cutting elbows.
– The crowd applauded a job well done.

YET ANOTHER UFC MW Interim Champion

UFC 213 WINNER and YET ANOTHER INTERIM UFC Champion: Whittaker, dec. 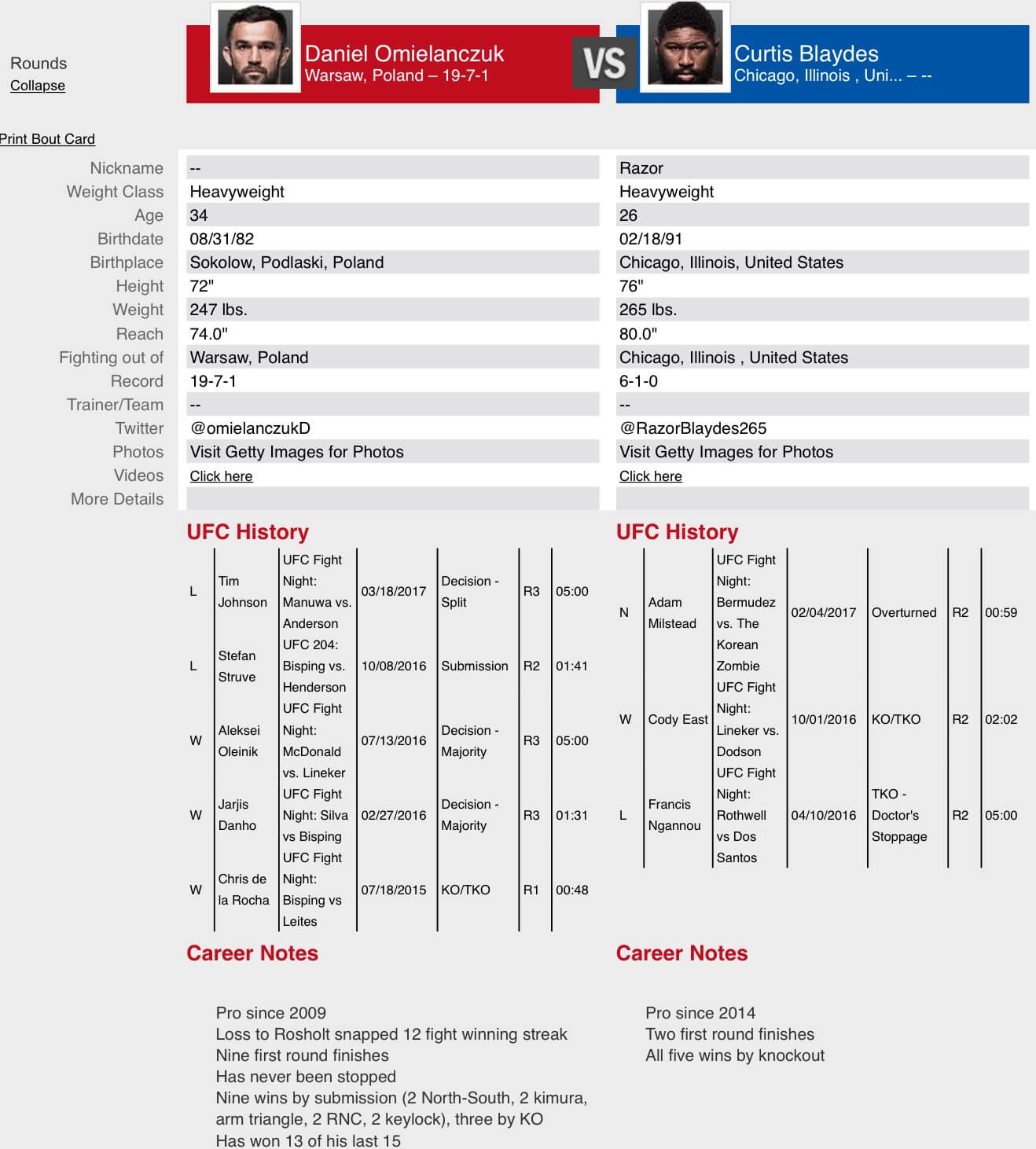 The crowd began booing in the first and didn’t stop. That should give you an idea of what happened. Two big dudes fought a sloppy fight. Razor Blaydes was in shape so it wasn’t your classic Big Fat Guy Fight, it was just lame. And I wrote all this before the third started and nothing changed by the end. 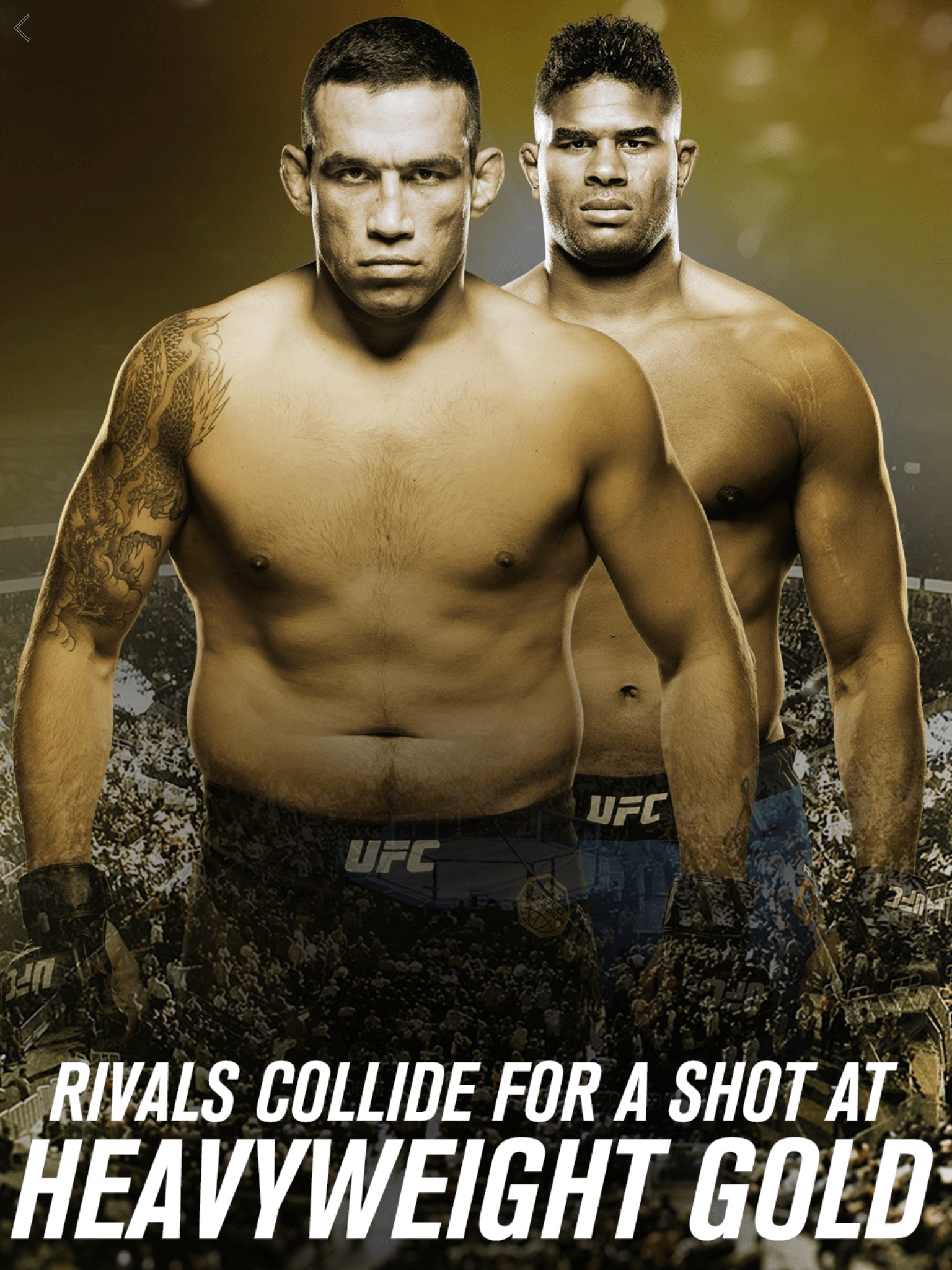 All on the feet except for the few times Werdum pulled guard (never with any success). Overeem controlling it all over the place. And then in the third: WERDUM CLIPS THE REEM AND HAS HIM ON LGBTQ STREET. GUILLOTINE. NO. ANOTHER FLURY. A TD AND … Werdum is on top. He might need a finish. Or this could be a draw even. (Or he won round one or two and coasts to a decision.) It goes the distance as the crowd booed. 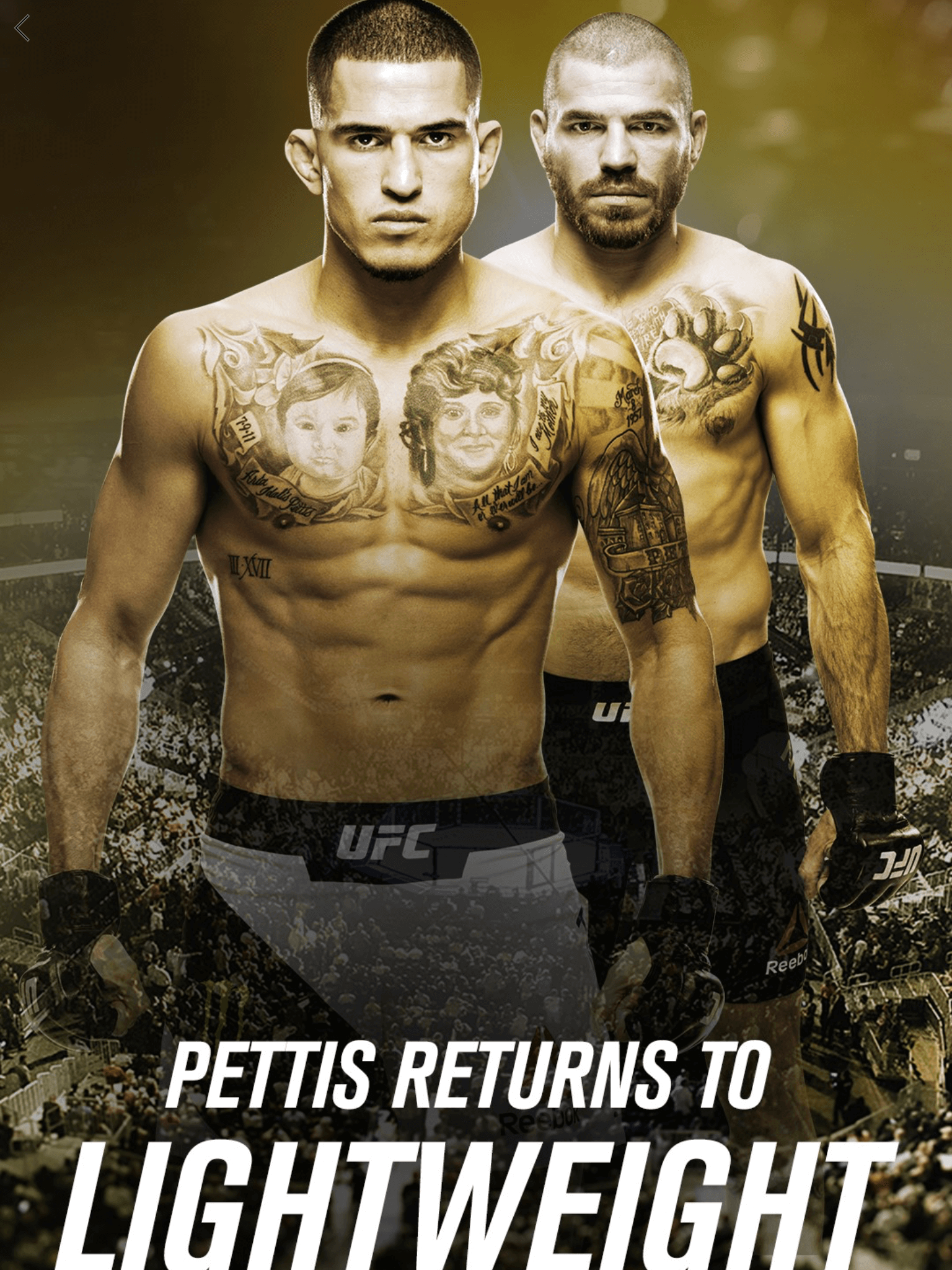 – Pettis dominates round one. Creamed Miller with a flying knee roughly half way through and from there picked every shot he wanted, called it, and landed it. Almost finished several times.
– Miller sweeps the leg of Pettis in 2 but then spends his time avoiding submission attempts. An upkick opens up Miller and there’s blood everywhere. Pettis sweeps Miller. Side control. Pettis almost gets the back, Miller stands up, Pettis with a slick trip TD.
– Pettis coasting in the third, dancing in the outside, avoiding really engaging and looking content to be safe. 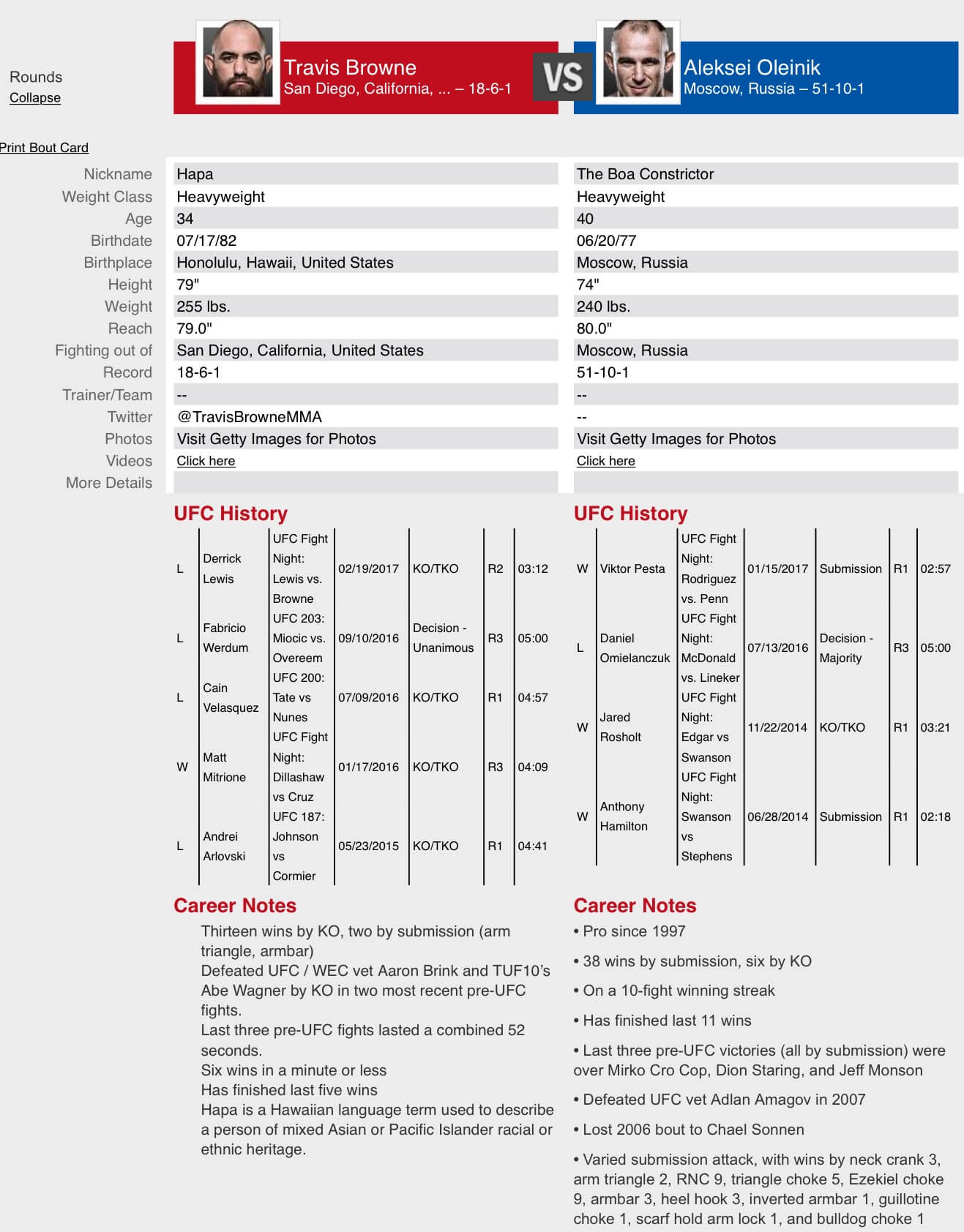 – Fucking fabulous. Browne dropped Alex big and basically had it finished. Then he baked off and Alexi got up and dropped Browne to death. Then Browne somehow survived. The great and classic Two Big Dudes Swinging fight. Then Alexi got it down and began to attack like a shark in bloody water. He kept trying smothering chokes but Browne rode it out to end a round I couldn’t imagine going five minutes!
– If only Alexi were a bunch of teenage skateboarders.
– Alexi throws the saddest look triangle attempt in the second. Like he was underwater as he tried it and Browne reacted like the heroin had just kicked in as he defended it.
– Aaaaaaaaand then: Alexi tossed Browne to the mat, got the back, locked his body up, and squeezed Browne’s in a rear choke that looked like his head between the ground and a garage door. Tap!

Belal actually did Ramadan while training for this thing. Muslims are a different, breed, man. Belal grinded his way to a win. He was death by a thousand cuts, culminated with a body triangle in the third for several minutes that fully and completely took the remainder of Mein’s soul. 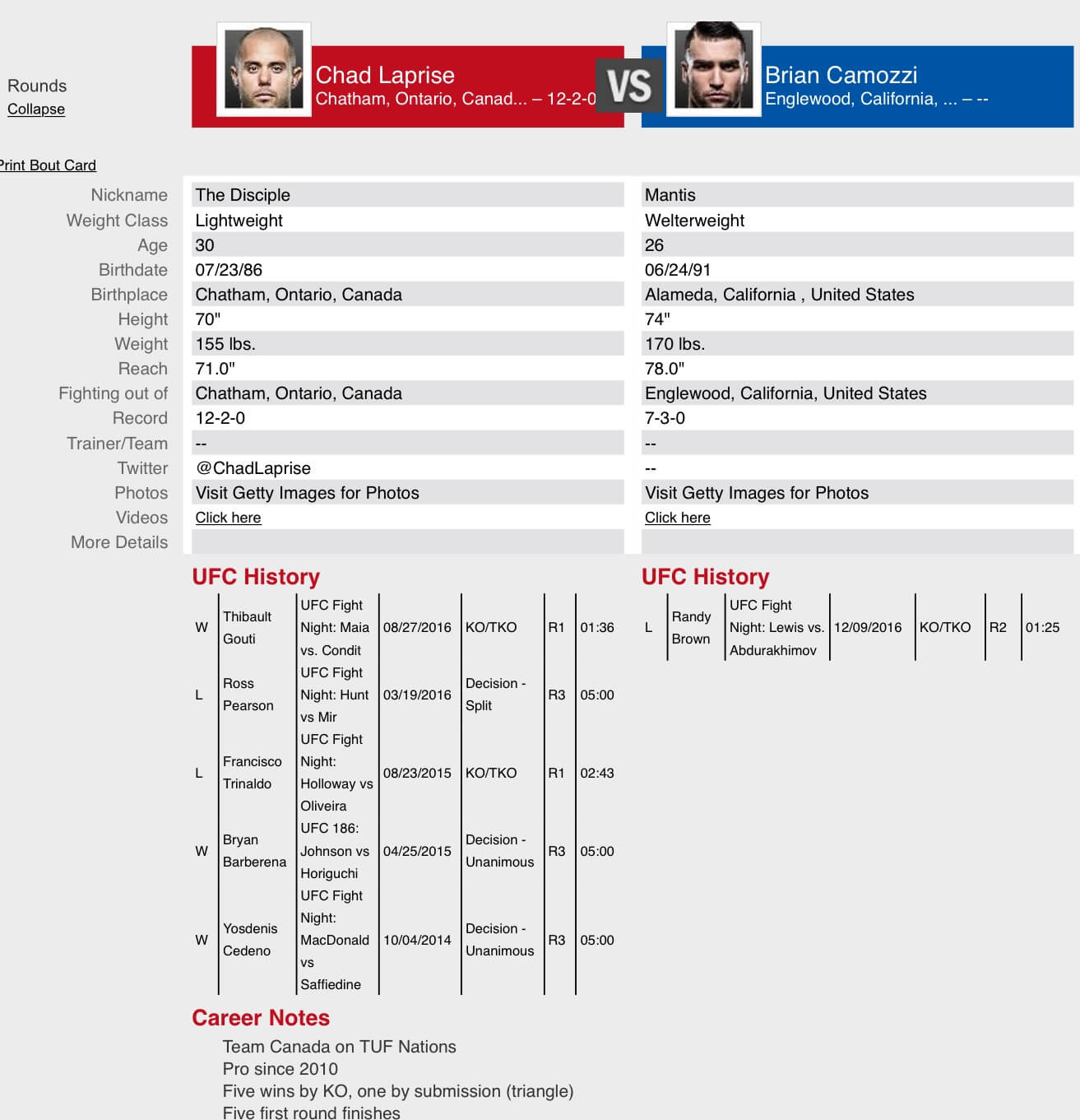 Laprise killed him in the third, slamming a straight right to the liver. Camozzi crumbled as he took punches to the skull, more than he should have but the ref was out of position. 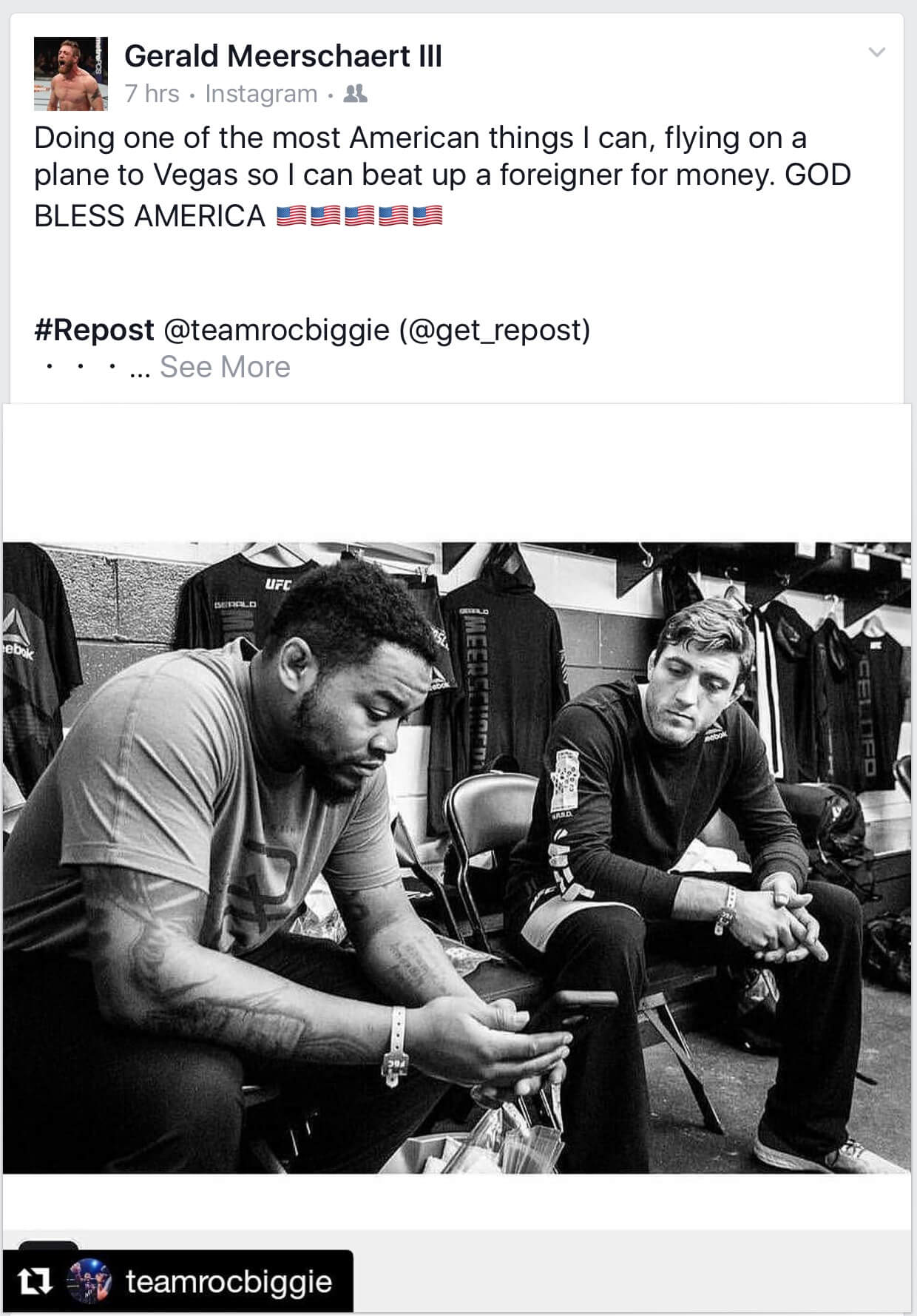 – Santos lit up the Duke Roufus fighter two minutes into the first. Meerschaert somehow survived and then caught a break as Santos poked him in the eye. All momentum dead and Gerald got a needed breather. That allowed it all to slow and they finished the round with the Brazilian on his back heel.
– Second round starts the same, as Santos is pounding on Gerald. Gerald is magically surviving. Man, when your talent is getting beaten on, that sucks. This suckage has gone on for a straight two minutes. And then over. 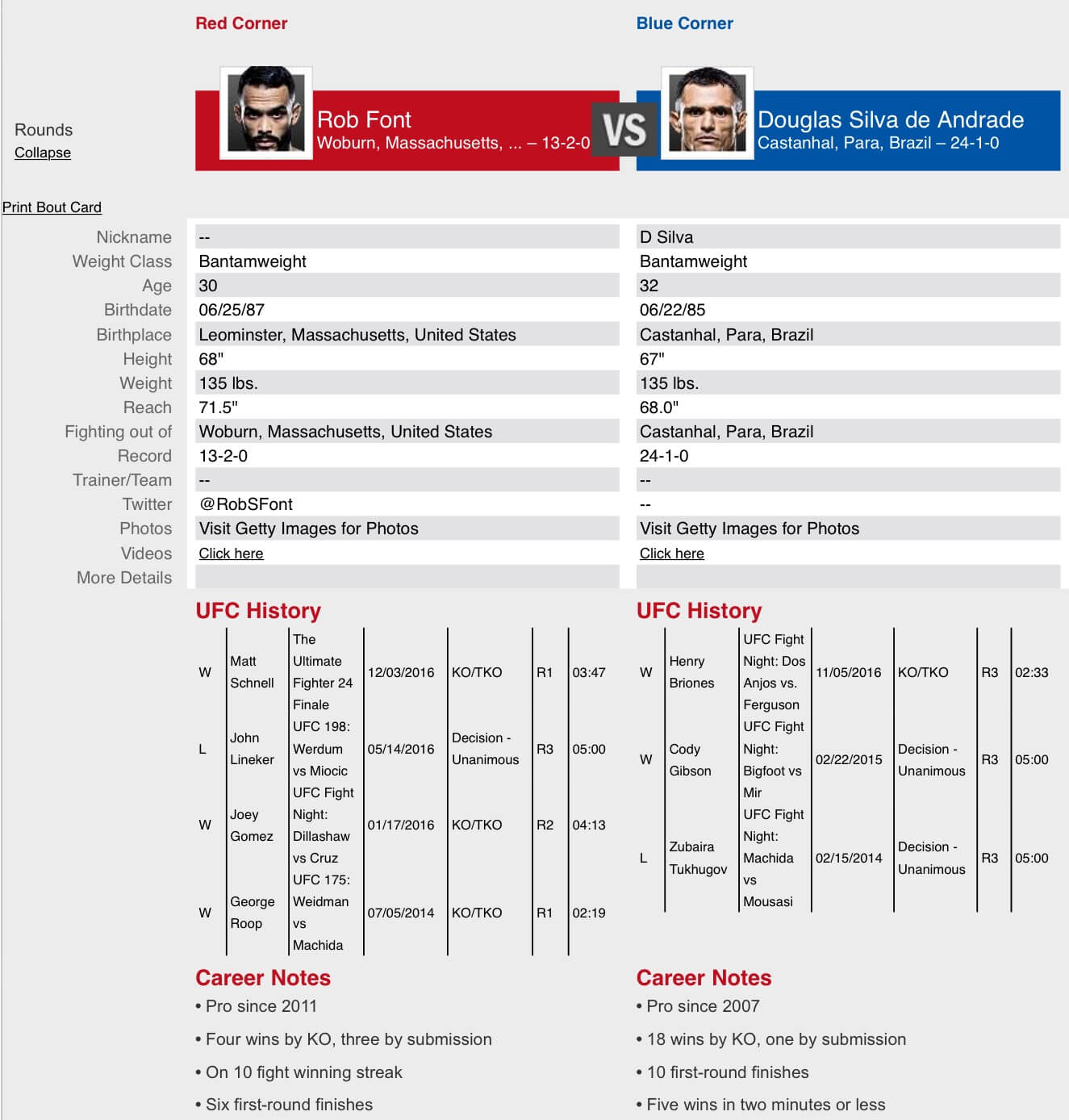 – Font fucked him up something bad in the second. Had Silva out on his feet. Then he took it to the ground, where Silva got to recover a bit. Then he locked in a guillotine in the slowest way ever, got slammed only for it to be driven in deeper, and got the tap. That was … weird. 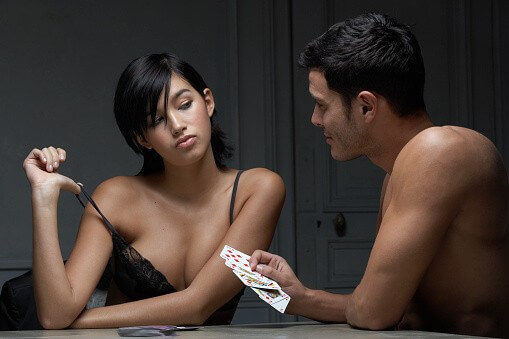 UFC products you can actually buy!