Update: stupid movie studios protecting their intellectual property… (The picture alone still made me happy though. It WILL resurface!) updated with the new trailer. New, better gushing post here.

Ok, I know a lot of people are going to (rightfully) gush over the Star Wars: The Force Awakens footage that came out of San Diego Comic-Con.  And then new Batman vs. Superman: Dawn of Justice trailer that also debuted. Or even Suicide Squad.  And I’m with you all.  But one thing should not be lost amidst all of this: we have a First Look at Apocalypse in X-Men Apocalypse Trailer!!!!!!!!!!!!!

Blurry cam footage of the X-Men Apocalypse trailer has just made its way out and here it is.  They look like they might be taking Apocalypse in a different direction, a little, but whatever: the tone, everything, it’s … YES!!!!!!!!!!!!!!!

This is a bit personal for me, I confess.  I’m a comic nerd, I admit.  And I’m talking back in the day, girls did not talk to you because you didn’t understand why you shouldn’t wear a Daredevil t-shirt in high school, before it became almost hipster ironic to like comics, comic book fan.  Like, my first semester of undergrad, I got so much of a stipend for food and such and spend – no joke – probably 75% of it on graphic novels (I also didn’t understand how a budget worked back then)(still don’t).

Like most comic geeks, I grew up – and still do – reading X-Men.  Everyone has their favorite comic (I don’t, but that’s because I’m all, “Well, it depends on who is writing it, obviously.”) and favorite character.  For me, out of every villain the X-Men ever had (and one of my top villains period), Apocalypse was the best.  By far.

Magneto?  Bullshit.  Instead of going hardcore with him and keeping him bad, they let him become a good guy here and there.  Same with like every other major villain of all time: Dr. Doom has acted as the BABYSITTER to the Fantastic Four’s kids at times.  Shit, today, LEX LUTHOR is a hero (to the general populace) in the DC Universe.  Apocalypse?  Never, ever, ever a good guy.  Ever.

Now, he’s recently died and been sort of reborn as a good guy but it’s really always with the undertone, Shakespearean tragedy of, “He’s going to become pure evil.”  And that’s why I like him.  ALWAYS EVIL.  Plus, he looked cool in the 1990’s comic style of art looking cool way.

The only other super cool, always bad, X-Men villain has been Mr. Sinister: 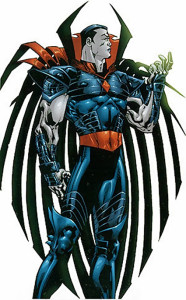 The deal with Apocalypse is he’s kind of like eugenics on steroids.  He’s, in theory, the first mutant.  He’s several thousand years old.  Was once worshiped as a god in Egypt.  And his basic philosophy of life is: survival of the fittest. 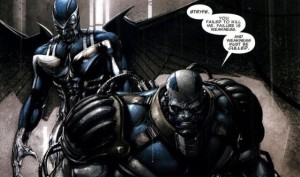 He’s so awesome that when Marvel Comics did one of their regular events, AGE OF APOCALYPSE it was 1. one of the few events that wasn’t a letdown; 2. still awesome to this day; 3. held true to the character.  The basics: it’s a world where X-Men leader Professor Xavier is killed before he can form the X-Men and Apocalypse and his philosophy rule. (Oh, and Xavier’s killed by his own son, who went back in time to try to kill Magneto but accidentally kills his dad because Xavier sacrificed himself – look, you make a lot of allowances when being a comic fan.) 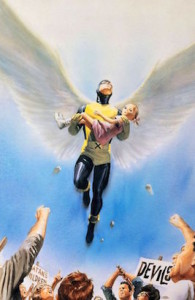 And did a bunch of genetic screwing around to make him look like this: 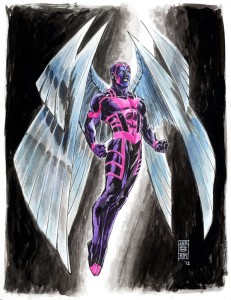 Apocalypse then changed his name to Archangel and makes him DEATH in his Four Horsemen of the Apocalypse. (He does the same with Wolverine at one point but nothing ever phases Wolverine so that’s basically ignored.)  Apocalypse has like a fixation on Angel too.  I swear, it’s like his raison d’etre is to mess with poor Angel. It’s not even Apocalypse really, Angel is like the go to “Let’s put this poor guy through hell” for Marvel.  It’s so awesome.

Apocalypse is going to be played by Oscar Isaac, who did good work in Ex Machina and is also going to be in that other film, Star something or another.

Anyways.  Director Bryan Singer helms it, and his X-Men movies are good.  So, this will be good.  If not: DEATH – or internet ranting.  Whatever.  X-Men Apocalypse debuts in theaters on May 27, 2016.  It’ll have the aforementioned Isaac starring alongside: Jennifer Lawrence, Oliva Munn (ugh), Michael Fassbender, James McAvoy (who I have a gay crush on), and of course Hugh Jackman.

MMA PED use: As Dangerous As It Gets

MMA PED use: As Dangerous As It Gets