Update to story below: I called it: totes vital marketing stuffs.  Right here, right now, the blurry trailer only NOT blurry and in perfect HD!

It wasn’t just Deadpool that got leaked over the weekend.  And it wasn’t just Star Wars footage that was properly released.  Comic Con also saw the Suicide Squad trailer “leaked.”  Starring … ok, fuck that.  It has Jared Leto shown as Joker which is what people most wanted to see.  He’s different than Ledger, thankfully because he needed to be, but still looks good.  And he looks like he belongs in this world.  He works much better in person, moving, than he did as a still shot.

Suicide Squad fits in the new larger world DC/Warner Brothers is attempting to create in an attempt to mimic what Marvel has done – except they’re doing it backwards.

And using SUICIDE SQUAD of all things as a tentpole.  C’mon, DC.  Marvel at least went through and did huge pictures with every major character they could before going to Guardians of the Galaxy.  Oh, we’ll take all of the bad guys from films that have not yet happened and have them be forced to team-up to take on even badder guys.  I know that’s the plot of Suicide Squad as a general rule but it really only works after the characters have been developed.  Still, it’s a Suicide Squad trailer and it didn’t suck.  “It didn’t suck” is the standard I have for things these days. 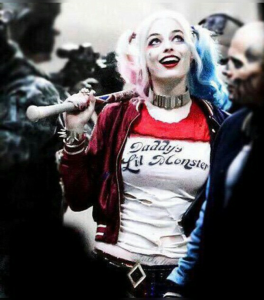 The Hateful 8 Poster from Comic Con!