This past weekend, many a nerd congregated at the now mega huge San Diego Comic Con.  This used to – back in the day (shakes fist like angry old man) – be basically a comic convention.  It was a big one, but mostly comics nonetheless.  Then over time it has morphed into this huge … thing.  Movie studios and such debut this and that and it attracts like a half billion people.  You’re going to see more news from there – here – like soon.  Because this site is nerd as all get out.

Without a doubt the biggest news to come out is something that instantly makes many a nerd feel weak in the knees: the phrase NEW STAR WARS MOVIE FOOTAGE!  It wasn’t a new trailer, per se, but it was a ton of new Star Wars movie footage for Star Wars: The Force Awakens that no one had seen before because they aren’t actors or involved in the movie.  Some behind the scenes, some of it in front of the camera, some of it blue screen (not sure what part of the camera that counts as).

You can see a flame thrower being used, Chewbacca (who is getting his own movie), Han Solo being … surprisingly sexy for a man of his age. Luke is kind of three.  Matt Hamill is shown, so obviously he’s in the movie (which we knew), but isn’t shown on screen as Luke.  Teases.  But, LOOK AT THIS:

Whether or not it’s true, the feeling from the footage was basically that of joy.  The actors all seemed to be having the time of their lives.  Simon Pegg (who I admit is a huge nerd so not necessarily the best representative of how a traditional actor might feel being in such a movie as he probably sits in his trailer every day thinking, “OMG!  I PULLED OFF STAR TREK AND STAR WARS! 10 YEAR OLD ME THINKS I’M SO COOL!!!”) has said, “My life is now complete.”

Harrison Ford said at Comic Con, kind of ominously, “The original Star Wars was the beginning of my working life…” which, like, dude, you’re not exactly young so I wouldn’t go around tempting fate like that and giving the universe a reason for this to be the end of your career. (Though it would likely be better than how Sean Connery’s career ended.)

Director J.J. Abrams does not have Lucas stink on him as of yet.

Here’s a corny line, but whatever:  You know how the first Star Wars movie that came out, Episode 4, was entitled “A New Hope.”  Well (you see where I’m going) you get the feeling that Star Wars: The Force Awakens is a new hope for fans everywhere – that was terrible and I’m sorry. (I’m not sorry.)

Starring: Daisy Ridley, John Boyega, Adam Driver, Oscar Isaac, Domhnall Gleeson, Gwendoline Christie, Mark Hamill, Carrie Fisher and Harrison Ford, Star Wars: The Force Awakens opens in theaters December 18th, 2015.  You will not need to be reminded of this as between now and then there may be thirty-seven bamillion advertisements. 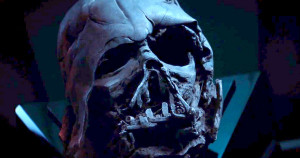 The SUPER EDGY HG religious cartoon of the week!