Batman is going to fight Superman. This is not new news. We have known about the movie for a while. There was already a trailer once before. Now: there is a NEW BATMAN V SUPERMAN TRAILER.

It. Is. Good. Very good. I have a few minor quibbles and am going to be full on nerd breaking down this thing. When I first saw it came out I’m pretty sure I accounted for half the views at one time.

The new Batman v Superman trailer gives much, much more background on the movie. Long and short: after Superman fought Zod there was a lot of destruction. Batman had buildings of his destroyed and employees of his killed. He’s pissed. He can wipe out the entire world, I paraphrase, I have to stop him.

We also see Wonder Woman in full costume and Lex Luthor being totally Lex Luthor. There is ZERO reason to not rewatch the new Batman v Superman trailer over and over again. And, yeah, check back real soon because I’m doing full on nerd with this thing. (I mean, you’re talking a guy whose first tattoo was Superman’s logo. His second … not Batman but I have beat the shit out of a lot of clowns in my day.) 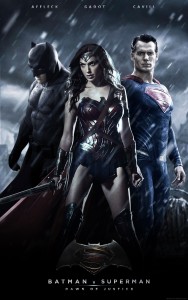 Anywho. Director Zach Snyder has me a bit excited. Ben Affleck looks very good as Batman. Henry Cavill continues to be the best non-Reeves Superman. March 15, 2016 I know where I’ll be. (If I’m not dead in a ditch.)

(No, seriously though, All-Star Superman is maybe my favorite comic book ever – not just Superman, but comic: PERIOD.)