by Dazza
in The Other Half
3

I remember a few years ago America went totally apeshit at the Superbowl when there was the briefest of glimpses of Janet Jackson’s boob. Angry citizens who were quite nonchalant to kids being bombed in the Middle East and living in poverty and starving in their own country were outraged that those same children could see a breast before they were ready. There were Government investigations, public apologies, complaints, some guy even tried to sue the networks for distress caused. I mean for fuck’s sake you couldn’t even see her nipple…..I know because I tried and when you paused it you could see she it was covered up.

Those traumatised, senstive people are lucky they didn’t grow up in the UK like I did. I was introduced to tits at an early age. We had a young Barbara Windsor in the carry on films losing her bra while doing exercises and we had topless Page Three girls every day in the newspapers. I didn’t have the internet to get me through adolescence but I did perfectly fine with big Samantha Fox and Linda Lusardi thank you very much.

So it came to pass that when a terrible disease came to prominence in the mid 80s us British and our promiscuous way of life were hit hard. Our right to freely engage in what was commonly refered to at the time as “Bonking” had to change, all because someone went to Africa and had sex with a gay monkey that had escaped from a Government laboratory where they’d be experimenting on a virus they’d found on a crashed meteorite.

I think that’s what happened anyway, that’s how I remember it.

It took a while for the population to react due to the misconception that the disease somehow only affected gay people. (Believe it or not some actually thought that AIDS was sent by God to punish homosexuals for their behaviour. Because sure God is fine with letting child murderers, rapists and people who steal graphic novels from bookshops free to do as they please but two guys having consequential rumpy pumpy with each other? Nope you’re getting a plague for that human race.) Then straight people started getting the disease and people started to worry. Then celebrities started getting Aids and everyone went absolutely mental.

In the UK the response was a television advertising campaign which at times was a little on the baffling and creepy side. Like the one that showed a black tombstone being carved on an exploding volcano and warning us not to “die of ignorance” though keeping us totally in the dark as to how we could stop being ignorant. Then there was the one with the iceberg that had had Aids written on it beneath the surface.

Others were more practical, urging people to use condoms in a light hearted comedy style. Like the one where a young man nervously plucks up the courage to buy condoms from a female shop assistant, only for her to loudly shout out to her co-workers asking what the prices are.

But people weren’t taking heed and Aids was spreading through unprotected sex. So TV brought out the big guns with 81 year old Fred Brewster. 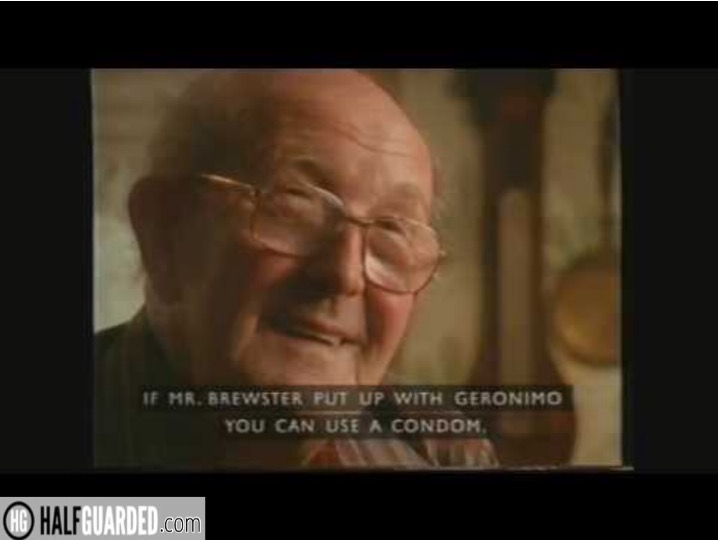 This 1992 ad started with this crinkly, rough old man giving a little sage advice to the young people of the day, expressing his disbelief at their reluctance to wear a condom. For a moment we think we’re getting a good natured lecture from one of our respected elders but then the tone changes massively as Fred produces a little box and takes out and parades the condom he himself used as a young man.

You see in Fred Brewster’s day condoms were not disposable but as he gleefully explains were meant to be used again and again. Now if the thought of Fred the morning after a successful night on the prowl stood over a sink washing his own dried spunk from the rubber tubing that passed for contraceptive in those days doesn’t make you feel a little queasy, then wait til he tells you it’s name. Oh yes, Fred named his condom, “Geronimo” and describes it as his friend. Quite how the ghosts of the Native Americans feel about this tribute to one of their most beloved legends will forever be unknown.

Fred goes on to recite with cackling glee tales of how uncomfortable Geronimo was comparing it to like wearing a bicycle tire and compares sex with it as like “having a bath with your socks on.” Despite this totally unerotic description of his past exploits Fred maintains that “it wouldn’t have stopped me, no way” in a dirty old man manner that used to make my skin crawl (kinda like the old woman on Titanic embarrassing her grand daughter by going into great detail how she dropped her knickers in the back of a steamy car that one time, hey maybe the iceberg that hit the ship was the Aids one and it was her slutty behaviour that brought the judgement of God on them all? ). 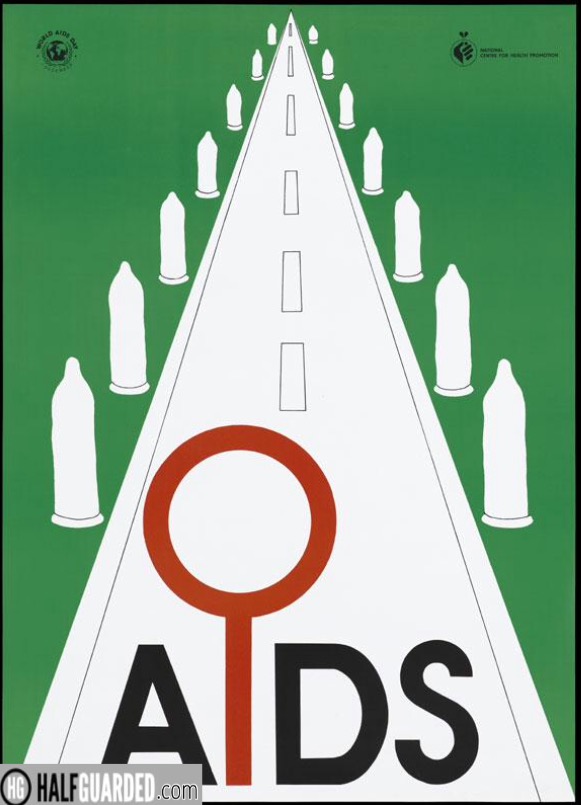 So did it work? Well the thought of sex possibly lost it’s eroticism to some of my generation due to the visual of Fred Brewster and his friend Geronimo. Of course in his youth I’m sure he was a handsome, dashing young man. Yet I do question why at 81 he still had Geronimo in a box. Sentimental reasons? A fond reminder of his past glories? Or maybe chillingly Fred Brewster was still in the game in his later years, using his new found fame to gain his way into the beds of crinkly old ladies in retirement homes all over the UK.

Anyway Merry Christmas one and all. And guys make sure you use a condom, because they’re ribbed you see so you’ll come across as a better lover than you actually are.