Do you want to see a Victor Frankenstein sequel?

The Victor Frankenstein sequel just might be a reality. Following the release of Victor Frankenstein we have rumors abounding that there is already talk of a sequel. Details are sketchy, of course, because they need to get both Harry Potter and Professor X back on board but word is the studio wants to get it out quickly. I guess they figure Frankenstein is the new zombie. Let’s take a look at the sequel to Victor Frankenstein and what it might offer.

Who will direct the Victor Frankenstein Sequel?

Though still in early talks, Victor Frankenstein 2 will be directed by Paul McGuigan. His past work on the hit TV show Sherlock gives him a unique perspective on London, the likely location of the Victor Frankenstein sequel. Plus: he’s cheap and came in under budget.

He’s gonna get married. Victor Frankenstein 2 will see the monster get hitched. At that point, the real horror story begins because (insert marriage joke here). Igor will try to break up the marriage, as he’ll find it unnatural. This will serve as a commentary on modern opposition to gay marriage, as Victor Frankenstein himself will argue that love knows no restrictions: living or dead. As for who might play the titular character’s titular wife (you know what I mean), well…

James McAvoy will return as Victor Frankenstein for obvious reasons – not the least because he’s awesome and likes roles where he has hair. The bride of Victor Frankenstein though? One executive we talked to suggested Melissa McCarthy as she wants to branch out a bit. They also may have been flat out lying to us (or us to you). Angelina Jolie as Bride of Frankenstein is also a possibility. Really.

Not done, yet, but it’ll be the same as the blow trailer. The tone and overall feel will remain a mix of humor and darkness.

The POSTER for VICTOR FRANKENSTEIN 2 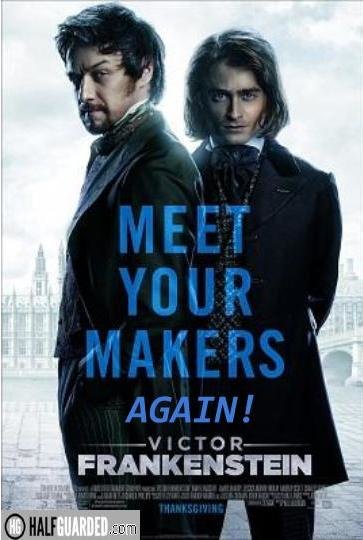 The sequel to VICTOR FRANKENSTEIN WILL BE WRITTEN BY

Mary Shelly for starters. Max Landies will not return to write the sequel to Victor Frankenstein because someone will wise up and realize he’s really just not that good. Chronicle was overhyped and his comic book writing sucks too (but he might write Dredd 2). They’ll probably get Judd Apatow to write the Victor Frankenstein sequel because he’s everywhere.

How The Oakland Raiders Can Defeat ISIS

How The Oakland Raiders Can Defeat ISIS