by Coughlin
in Entertainment: Movie News, Previews & More!, Evergreen, The Other Half
10

Jeremy Renner isn’t thought of as a big movie star – and for good reason: he isn’t one.  Nope, he’s Clint Barton, better known to the world as Hawkeye from Marvel’s The Avengers movies, and Marvel’s The Other Movies Where We Put Everyone In Them.  I hate liars and Big Hollywood has been protecting yet another of its people by claiming they’re an actor whilst in reality they’re anything but.  IT’S ALL REAL now shows you all that Hawkeye is real, Jeremy Renner isn’t.

What do we know about Hawkeye?  He’s a soldier.  A highly trained soldier, who works for a secret government agency, has extraordinary skills, and is a hand to hand badass – wait, sorry, Hawkeye?  I meant Agent Brandt from Mission Impossible: We Tried To Replace Tom Cruise.

No, sorry.  That’s wrong.  Secret agent type of soldier who can do things others can’t but is a mortal?  I meant to write Aaron Cross from The Bourne Legacy: We Tried to Replace Matt Damon.

Like all good, badass war heroes, Hawkeye has his origin and we all saw it: The Hurt Locker.  A man – a regular man who volunteers for the army – is thrust into one of the most harrowing jobs possible: bomb defuser guy.  Hawkeye joins up to save his country and wife back home from Mohammad and all the Bad Muslims in Iraq and then spends his tours of duty under incredible stress.  He does a job that requires nerves of steel and a steady hand.

After seeing first hand all the damage a bomb can do, it’s no wonder Hawkeye uses a bow and arrow.  There’s no logical reason a badass soldier should use a weapon that was outdated 300 years ago – unless he knows the burden modern technology carries when it is used in war.

All throughout The Avengers and such, Hawkeye and his platonic BFF, Black Widow, talk about old jobs he’d done and such.  Obviously, we saw all of them in Mission Impossible and the Bourne Legacy.  Again, he’s not a superhero.  He’s not a demi-god.  He doesn’t turn into a monster when angry.  Hawkeye is a normal person.  Normal people freak the freak out when they see the shit that happens in The Avengers.  That is, unless they’d spent part of their life staring at bombs, another part having their brain screwed with, and a third part having Scientologists screw with their brain.

Hurt Locker et al. are the reason Hawkeye feels comfortable shooting an arrow at a Norse god who is riding a flying dragon.  That same instinct that says, “No, this bomb won’t kill me” and “No, I can resist a scam religion” also says, “Sure.  SHOOT THE GOD WITH YOUR BOW AND ARROW!”

It also explains why he isn’t surprised by Loki and Thor existing: you listen to Tom Cruise meander on about gods living in volcanos and such and you wouldn’t be surprised that stories you read about in high school were true too.

Want more proof?  Explain why I’m supposed to believe that all of these are from different movies.  LOOKS PRETTY SIMILAR TO ME! 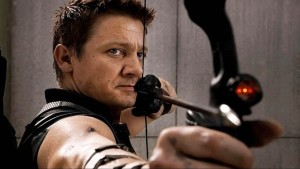 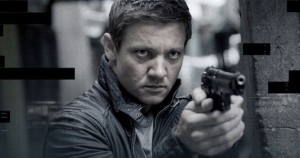 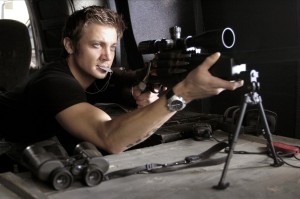 Gee, that one looks suspiciously like a guy who is ACTING AS A SHARPSHOOTER, a job that requires great eyesite and such – the things Hawkeye is known for.  Oh, and it’s from a “movie” entitled: SWAT.  Yup.  What would a guy who is a secret killing machine do when he has to come home?  He’d do what most soldiers do: join the police force.  In this case, the SWAT team. (I think the T in SWAT stands for team but I’m not going to bother checking.) 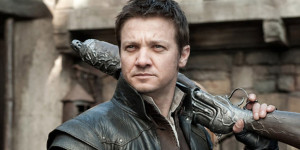 Oh, look, there he is again, with a gun.  What “movie” is this?  One where he hunts WITCHES!  Again, a man who had once hunted witches would obviously have no problem believing in Norse gods or Tom Cruise’s heterosexuality.

You can’t hide that stare either.  That 1000 yard stare.  That knowledge that his hands result in death.  You want to know what red is in his ledger?  All you have to do is watch…

Tactics? Is that it?