The Nevada State Athletic Commission, which is in no way incompetent, is having hearings today on various things.  Suspensions for this and that.  Licenses for this and that.  Yada yada.  Most impotent for our purposes of course is that we will be able to get an update on how Anderson Spiderman Silva and his penis are doing.

As noted before, Silva’s penis isn’t doing well.  It was hard news for us to swallow, no doubt.  His penis needed medicine and then betrayed Silva, leading to his failing for steroids (god helped too).

It’s ongoing and such so we’ll watch it and then talk about the stuff that matters.

They’re talking about a female boxer. They said “Golden Gloves” but at first it sounded like “bowling gloves” which would be sooooooo much more interesting.

Some boxer no one cares about is temporarily suspended. TALK ABOUT SILVA’S WIENER!

That moron Caio Maghles (not even gonna be close to spelling it right) who lost and spit blood at everyone is temporarily suspended for unsportsmanlike conduct.

Jake Shields temporarily suspended bc he punched Palhares after Man Child was a dick. Palhares suspended the same for the dick move.

They showed a shot of Silva looking down. At his phone? That’s what some think but we know the truth: he’s checking on his little buddy.

Some boxer dude had aderral in his system and his lawyer (whose name is Kimberly)(which is a stripper name so remember that when naming your kids, people) is doing a pretty good job actually of presenting a case for a lesser sentence. His penis appears to be OK though. This may be Shane Mosley’s kid. I should investigate. Oh, hey, it is!

This commissioner is asking him how many pills he took over the course of a month. She’s doing so in a clumsy manner. She’s also asking if he can read English (which she kinda has to do for foundational reasons). All this so she can ask why he didn’t list the drug on his pre fight deal. She’s coming across like an asshole. “Do you know we have a website?” Fuck’s sake.

“There are several ways to punish him, one of which is to give him a second chance.” – that’s a weird one.

“Sure you want to fight your dad?”

He got seven months and a fine.

UFC FIGHT PASS, when Silva is shown, presents little facts about him. They’re ripping off Pop Up Video for an NSAC hearing. Silva needs help popping up.

Some dude now. No idea who he is. Showed up in a t-shirt. He popped for roids. SUCKS TO SUCK. TALK ABOUT ANDERSON SPIDERMAN’s PENIS!!!! Ugh. This dude isn’t contesting things, I think. Just cut off his head already. LOL. They’re swearing in a guy over the phone.

“Are you raising your right hand?”

I’m on a couch, with a dog, wearing what I wore when I woke up today, and I’m better dressed than this idiot. DRESS NICE FOR LEGAL SHIT, PEOPLE. Seriously, it makes an actual difference.

This is what the drug Stanozolol looks like when nerds write it out: 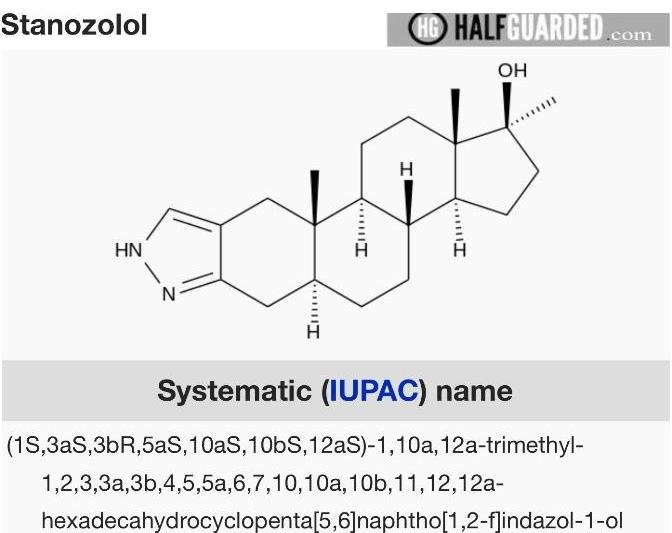 We are doing the thing where she asks the dude if he read and filled out the form. Sigh. GET TO THE PENIS!

Love that they keep saying “You sure as lucky this is happening now because pretty soon you’re boned.” NINE MONTHS FOR THIS NO-NAME.

Someone I don’t know who got paid $450,000 to box is here. Boring. Every fighter is very concerned about their reputation and name. He’s blaming tainted supplements. Why the hell is it that my multi-vitamin doesn’t have roids in it? “We threw away the mystery bottle of supplements that contained more roid than vitamin D months ago. Oops. Sorry.” Suuuuuuuuure.

“We have a very particular team. We are very careful about what goes into my body and when.” So particular that your GNC shit was tainted I see.

SUSPENDED for a while.

SILVA TIME!!! Will his wife be called as a witness?

Pop up video informs us he failed. Nicely done, UFC.

They just admitted that the middle test was negative. Love that is the case and it seems to just be ignored.

The interpreter is kinda cute. Maybe she’s there to verify his limp dick defense.

Again: and I love that they ask “Are you raising your right hand right now?”

Someone has evidence but not enough copies. Maybe. None of these people know what’s happening right now. Silva’s lawyer thought someone else would have copies of things. Lol. Seriously, when I go to court, I’m so paranoid I have like fifteen copies of everything.

Silva’s team introducing more tests from fight night that may show no failure.

Silva’s post fight A and B samples differed in some way. Maybe. Serious times: you should be more clear when presenting your case. If I – a legitimate practicing attorney, who also obviously knows MMA pretty well – is having issues following all this then all hope is lost. Basically, there are a lot of tests and they are inconsistent because they are positive and negative. Hey, I’ve been arguing that!

I disagree that taking pills to make your wiener work isn’t “performance enhancing.”

Nevada lawyer (correctly) pointing out that Silva’s expert isn’t a doctor – the dude is actually a lawyer (or has a law degree) – and is therefore maybe not qualified to be an expert. (Technically, a court can let anyone be an expert if they can provide testimony a court finds helpful. And this has lesser evidentiary standards than a real court.)

Silva’s expert’s credentials: used to work at the UCLA WADA lab – reviewing contracts and being an administrator. No penis experience.

A commissioner who looks smarmy as heck, with greased up hair, making good point: why didn’t you guys give us any documents showing your test results?

Silva’s penis drink was unlabeled and the expert can’t tell anyone what it actually was – shady Brazilian shit off the shelf is the phrase they should say. Expert saying it is Cialis – but not a prescription version so: SHADY BRAZILIAN SHIT!

NSAC saying “uh, we need to go soon so this has to be wrapped up in five minutes.” That’s some quality fairness there.

It was the Guido looking dude that needed to go. But now he says he doesn’t need to go so it’s all good.

Silva won’t tell them why his dick wasn’t working.

They asked “why didn’t you get a real doctor to give you the RX?”

Silva expert saying that Quest testing would’ve been negative if they’d used Quest and not the other lab.

Ed Soares is now going to translate bc they didn’t like the translation the hottie gave.

Now Silva says he couldn’t get this substance in America or Brazil because it was from Thailand. Hey, if you want your dick to work, Thailand caters to all your needs.

Silva: I’m human. I make mistakes. I never would’ve taken it if I knew it had roids in it. All I wanted to do is get my dick hard.

Silva only knew the dick pill giving guy for a year. Silva and this guy were talking about “man stuff” when he was recommended to take the penis powerer!

Hasn’t taken it since January or so. His poor wife.

Now everyone is trying to figure out if he needed to get his dick up, his dick hardER, last longer, or maybe make it bigger.

Now “it wasn’t me” is playing. Whoever is running the music for the phone system is a great troll.

Female commisioner now talking about fishing nets as a metaphor in some way. NSAC seems pretty ticked that he’s basically not taking any responsibility and is essentially calling him a liar.

Anderson Silva Suspended 12 months; fined a ton of money; no word on penis

Anderson Silva Suspended 12 months; fined a ton of money; no word on penis