MMA is a crazy sport.  By it’s very nature, it’s insane.  Two highly skilled, athletic adults willingly step into a cage, trying to beat the crap out of one another.  It’s crazy, and weird stuff takes place all the time.

Upsets happen constantly.  Big money fights don’t ever get into the cage because a contender loses or gets hurt.  Bad, unexpected things with fighters seem to interfere with the plans of Dana White, Joe Silva, and Sean Shelby on an almost daily basis.

Georges St. Pierre retires in his prime.  Lots of big, profitable fights vanish in a poof of smoke.

Nick Diaz is crazy and can not, not smoke pot.  Is suspended indefinitely.

Cain Velasquez is constantly injured, finally returns and gets his ass handed to him by Fabricio Werdum.  There goes Zuffa’s biggest draw in Mexico.

And this is just the tip of the iceberg.  So many other big fights, and massive profits, have been squandered due to losses, injuries, and unforeseen circumstances.  It’s a wonder that UFC has managed to stay profitable at all.

When Jose Aldo pulled out of his UFC 189 Featherweight title defense against Conor McGregor, Dana White, UFC executives and MMA insiders were worried.  An interim title fight with McGregor facing the second best featherweight in the world, Chad Mendes, was a less desirable fight for a couple reasons.

One, McGregor and Zuffa had been building the Aldo fight for months.  Aldo and McGregor went on a the first, and only, world tour to promote the fight.  It was going to be one of the more successful shows in Zuffa history.  A fight with Mendes was not the same.  It was for an “interim” championship.  Mendes was not Aldo.  The build just was not there, it was going to be a letdown.

Two, Mendes is a great, great fighter and a very risky opponent for McGregor.  Unless Mendes was fighting Aldo, he had fought the best featherweights in the world and always won.  Stylistically, Mendes is an excellent wrestler.  McGregor’s grappling had not been tested in the UFC, but odds were that Mendes could and would take McGregor down to the ground.  There he would have his way with the Irishman. 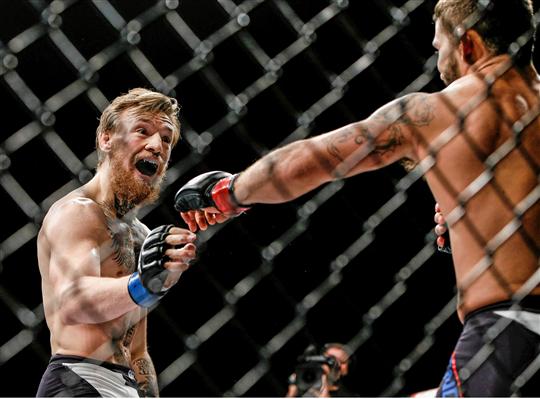 On July 12, 2015, though, Conor McGregor won.  He did it and backed up all the shit talk.  He knocked out Chad Mendes and became the interim featherweight champion of the world. Conor McGregor wins at UFC 189 will cry out the headlines.

McGregor became legit.  The real deal.  No more gimmicks.  A truly elite fighter, who had an innate, genuine charisma that is rarely seen in the world of MMA or any sport.

Due to McGregor’s knockout win over Mendes, the upcoming fight between McGregor and Aldo became an even bigger deal.  It will realistically pit the two best 145 pound fighters in the world against one another, with a grudge that has been simmering for over a year.

Fans will be dying to see this fight.

After all of the cancelled fights, injuries, and drug test failures, the MMA world, on this one night, finally had a happy ending.