The 2016 Presidential Vote: Not In My Name

This site has published a number of pieces on why you shouldn’t vote or shouldn’t encourage people to vote or how the UK had their … issues … with candidates over the years. You should read them.  They’re good.  We’re also all sick of campaign talk by now so this is, one imagines, likely the last piece we’ll run about voting for a while, what with Tuesday being the election and all.

I doubt I’ll convince anyone of anything so this is probably more for my own mental health more than anything.  I haven’t voted yet.  I don’t like early voting.  I think it is rife with the potential for fraud and voting should be something important; making it easy makes it less special.  We’re voting for people who control large aspects of our lives (sadly) not who dances best on ice.

Voting is a weird endeavor; pointless yet important.  Does my vote matter, being that I live in Illinois?  The state has been reliably Democratic in presidential elections for some time now and the current polls have Mrs. Clinton so far ahead that she’s all but guaranteed to win the state.  This allows me a bit more freedom than others because I “know” my vote doesn’t count.  I could write in Hitler and it isn’t swaying anything.

However, if you live in a swing state like Ohio or Florida, your vote really does matter. (Anyone living in Florida who doesn’t understand this after the 2000 election is too stupid to vote so just shun them.)

But how would I vote if I did live in a swing state?  What would I do?  I don’t exactly know.  I hold multiple degrees, have studied politics, worked in a state level official’s office, practice law, and so on, and yet at this last hour I still don’t know what I’d do if my vote counted.  Such is this election.

Voting for the Lesser of Two Evils

That’s not a new phrase.  People have done the “hold my nose and vote” thing for ages.  It seems that we’ve entered the Boy Who Cried Wolf stage of voting though.  The choice between President Obama and Governor Romney may have been tough for people but anyone who thinks either man was unqualified to be president is simply hyper-partisan.  They’d both displayed rational temperaments, had experience governing, and people actually liked them.  Maybe one was naïve, or ill-informed, but neither was a bad person at their core.

Obviously this year is not like that year.  Or any year.

Donald Trump and Hillary Clinton are both simply not qualified to be president, at least in my estimation.  This is an election between two actual evils.  I can’t even look at their pasts and try to figure out who has been worse longer, as they’re nearly the same age and have been in the public sphere for roughly the same time.  Allegations against Mrs. Clinton go back to the late 70s and early 80s, same with Mr. Trump.

And, no, I don’t think either one is the victim of an extended smear campaign.  True, not all smoke signals fire but these two have set off every smoke detector in every room they’ve ever entered.  Either they’re broke or everything else in the world is.

This is Not an Ideological Choice

Mr. Trump is nothing as a politician.  Well before he secured the nomination, I wrote about how he was quite possibly the first ever Nihilistic Presidential Candidate: there’s no evidence that he has a sincere position on anything.  As for Mrs. Clinton, when she herself flatly states that she has public and private positions that are different, the only thing keeping her from being as flimsy as Mr. Trump is that at least some of her views have never changed. (She’s been consistently Pro-Choice, for instance.)

With neither representing anything substantive, instead it’s a choice of character.  This isn’t inherently bad, as having an executive who is pragmatic – the euphemistic way of saying they have no real principles – has its place.  Sometimes it’s ok to let Congress make all the decisions while the President just keeps the peace.

Trump’s, shall we say, gaffes are well known, and ignoring whether Mrs. Clinton’s use of a private server was a violation of the law, the leaks show a clear pattern whereby she and her surrogates sought to undermine the voting process of the primaries.  Both lack the basic character to run a little league baseball team, let alone the Executive Branch.

Voting for the Third Party

This leaves me with no choice but to vote for a third party.  Whilst I am essentially a libertarian in my views, if the choice was between Mr. Trump and, say, Vice President Biden, I wouldn’t mind voting for Mr. Biden.  I may disagree with the man on issues but I think he’s a fundamentally good guy.

Sadly, Mr. Biden is not running and so my third party options are Dr. Jill Stein and Governor Johnson.  Stein is out.  Not only is she so radically different from me on issues, her party has openly advocated for homeopathic remedies and “alternative medicine” in their official platform as recently as March of this year.

This parallels my main problem with Governor Johnson as well, his belief that there should be mandatory labeling of GMOs.  I wrote about my disgust in his position, it all the more awful given that a libertarian (of all political stripes) should be cautious of the government giving into irrational concerns about “big evil corporate food types.”

In that piece (which is excellent), I note that whilst I’m not a single issue voter, for some reason GMOs strike a chord with me.  In fact, I’m Pro-Life as a general rule and the Libertarian platform is not.  If one looks at the position of a Pro-Life voter, it should be near impossible to vote for someone Pro-Choice; if you believe that abortion is the killing of a person, that should trump (no pun intended) any other position.  The back of my box of cornflakes saying “GMO” is nothing compared to supporting infanticide.

Yet, the GMO thing bothers me more.  Can’t explain it.  Just a gut thing.

There’s also the issue of Governor Johnson’s running mate, Governor Weld.  I don’t fully trust him.  He’s been a successful Republican governor in a blue state, but I can’t help shake the feeling that he’s more a part of the Libertarian Party for social reasons rather than economic ones.  Plus, a week before the election, he was vouching for Mrs. Clinton’s character. (And, no, it doesn’t matter the context: there’s no excuse for anyone to claim she’s an honest person.)

There are other candidates out there, besides the main two third party folks.  There’s the Constitutional Party.  It looks good but … they also have an issue with GMO labeling! (I’m being trolled by reality at this point.)  But really, all that’s left for me to do is write someone in.

Clearly, this is pointless.  I can’t write myself in; I’m not yet 35 and so not eligible to be President.  I used to write in my father, often for local elections where I didn’t know anything about the candidates, but he’s, well, dead.  Dead people vote in Illinois, they don’t win elections. 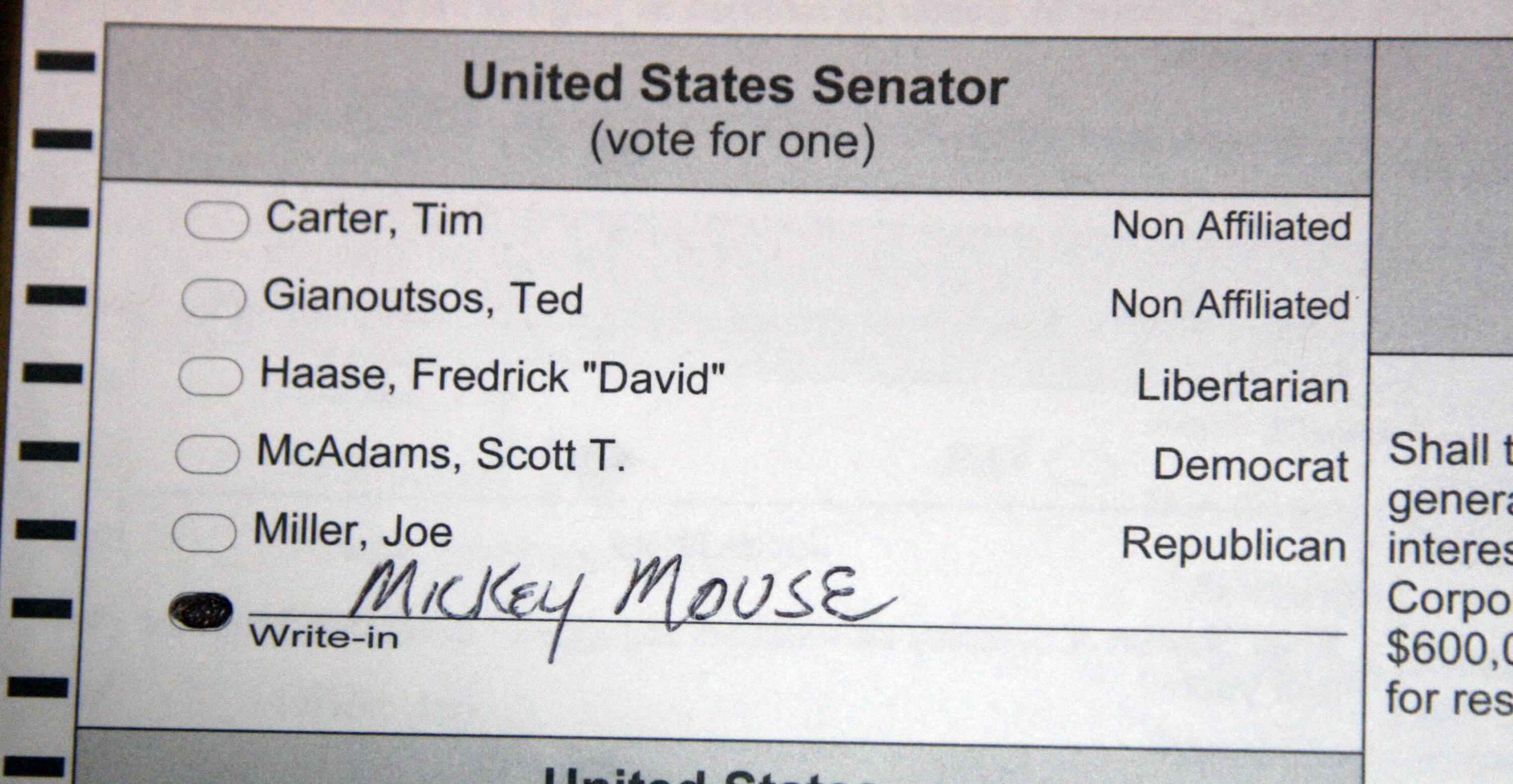 My choice, then, is probably between Governor Johnson and writing in … my mother.  My mother doesn’t know a ton about politics but at least she’s a good person.  No, really, she is.  Don’t judge her based on how I turned out.

Not In My Name

I can’t remember from where this phrase originates, if it has a specified origin anyways.  It’s stuck in my head though throughout all of this.  Someone is going to be elected and that person is Bad.  The most basic, 3 year old child’s understanding of the word, Bad.  From the mouth of babes…

I could just not vote, but I think voting is a good thing.  Too many people died simply so they could cast a ballot.  Gun rights, abortion rights, financial rights, and so on, they all pale in comparison to the right to vote.  Whether it be the Revolutionary War, Civil War, any of the World Wars, or even the Civil Rights Movement, history shows that when people don’t have the ability to vote, it overrides all other concerns. 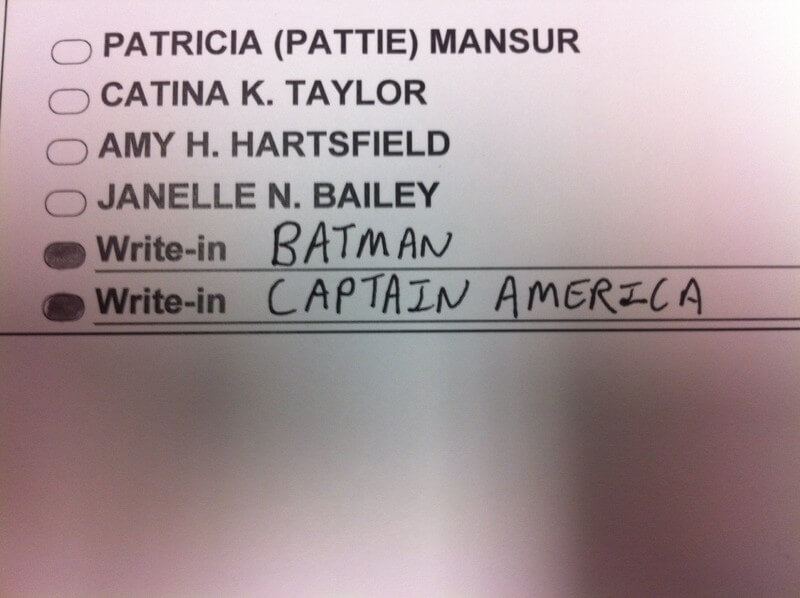 The system is a mess, sure, but only if you buy into the idea that one must vote for one of the Big Two.  A write-in vote, or a third party vote, while as a practical matter are pointless, at least allows me to have a clear conscience for the next four years.

That knowledge, that I didn’t lend even nominal support to someone that is Bad, is important to me.  It should be to everyone.  When you vote for someone, you declare that they act in your name.  While there are times when one’s ignorance of a politicians true character is forgivable, this is not one of those times.  You know that Mr. Trump and Secretary Clinton are Bad.  Thus, for the next four years, whatever they do, they do with your support.  Theirs is the wagon you’ve hitched upon.

Not me.  When Mrs. Clinton continues a war in the middle east, it won’t be with my support.  If she raises taxes, appoints an unqualified judge to the Supreme Court, I won’t be found.  When she and her husband go back to renting out rooms of the White House in exchange for donations, when they broker deals with Saudi Arabia as the Saudis donate millions to the Clinton Foundation, I’ll be a ghost in the wind.

And if Mr. Trump starts to round people up in the middle of the night for being brown, if he gets on a ladder and literally paints the word TRUMP across the White House (you know he will), if he insults a foreign leader and destroys America’s relations with a trade partner, if he decides to greet UK Prime Minister May with a “playful” slap on the ass, if he shuts down trade in one area without appreciating the effect it will have on another, I’ll know I didn’t help.

Can you say the same?