The Ultimate Fighter – Season 4 – The Comeback

After just three seasons, UFC goes to the gimmick well for season four. This season, instead of rookies, the UFC selected UFC veterans who had never had a title fight. The weight class winners, this time, would receive a championship bout. This resulted in one of the biggest up-sets of all time.

Since these guys were already trained fighters, the coaching was a little different. The coaches instead acted as advisors, and they were Randy Couture, GSP, Mark DellaGrotte, Marc Laimon, Rich Franklin, Chuck Liddell, and Matt Hughes. 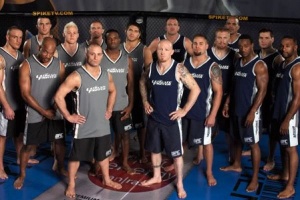 In the welterweight tournament finals and main event of the evening, Matt Serra defeated Chris Lytle by split decision.

In the middleweight tournament finals, Travis Lutter defeated Patrick Cote by submission in round 1.

Where are the winners now?

Matt “The Terror” Serra: Age 41, retired with an 11-7 record. Serra famously earned his championship bout against GSP at UFC 69 – Shootout, April 7, 2007. He went in as a +800 underdog and proceeded to KO GSP in round 1. He lost the rematch a year later. He only fought three more times, a loss to Matt Hughes, a win over Frank Trigg, and a loss to Chris Lytle. Then he decided that eating is more fun than fighting and got really fat. He still coaches and works with the UFC and is on that stupid new show with Dana White, “Looking for a Fight.” He’s a big fat annoying grease ball.

Travis “The Serial Killer” Lutter: Age 42, retired with a 10-6 record, everyone thought that Lutter had a great chance to beat Anderson Silva for the middleweight championship because his jits was so good. Unfortunately, he came in fat, missed weight, but got to fight anyway (just non-title) which didn’t matter because Anderson Silva submitted him in round 2. He only fought once more in UFC, a loss to Rich Franklin, and fought two more times ending in a loss to Rafael Natal May 21, 2010.

Summary: The show was lackluster at best. Seeing the grizzled veterans compete was cool, but the antics were mild. I like the concept of the guys picking the fights. This is not a team sport. There is no need to have coaches. Maybe Dana could do this concept again in season 25, or preferably, just end the show.

Bellator 149 ratings: finishes second for the night in key demographic