In the never ending feud between President Donald Trump and Speaker of The House Nancy Pelosi, Trump aimed to one up Pelosi by debuting his new look which he says proves he supports the African American community more than she does.

After Pelosi and House Democrats donned a Kente cloth to show their solidarity with the African American community and the Black Lives Matter movement, President Trump announced he will begin wearing a “Doo-Rag” from now on.

“Sporting my new Doo-Rag, also called a wave cap by the blacks. Gonna have amazing waves in my hair soon. Thank you Kanye, I’ll wear it while I save the blacks from Dems like Pelosi. Her Kunta Kinte Cloth looked dumb. Way to pander Nancy. Her new name is Pandering Pelosi! Word up!” 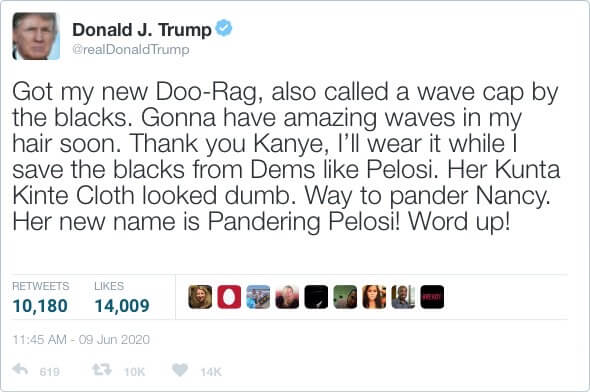