This season was rumored to be Bisping vs. Sonnen, but Jason “Mayhem” Miller stepped in because Sonnen was not available. I don’t recall paying that close attention to this season as it was clear Miller was on his way out of UFC and was merely brought onto the show to be an idiot, and he rarely disappoints in that category. In fact, currently, he’s either in jail, out on bail, or getting ready to go on another chaos spree… I’m just playing the odds.

The big thing I remember about this show was T. J. Dillashaw. I remember that I picked him to win it all, and in no way had anticipated him being beaten by “Flippy McGee” John Dodson. I remember really liking Bermudez and Brandao as well. I guess Brandao learned a little too much from Miller as he also is currently out of UFC and facing his own Assault and Battery charges. 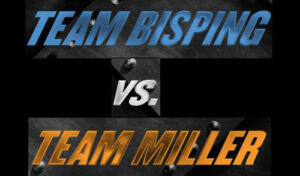 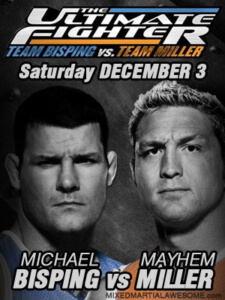 Bantamweight: John Dodson defeated T.J. Dillashaw via TKO (punches) at 1:54 of round 1. He then did about 50 flips including running up the cage and backflipping a bunch of times. It was pretty awesome.

Featherweight: Diego Brandao defeated Dennis Bermudez by Submission (armbar) at 4:51 of round 1. Bermudez poured it on and this was actually a hell of a one round fight.

Middleweight: Michael Bisping defeated Jason Miller by TKO (knees to the body and punches) at 3:34 of round 3. It was embarrassing how bad Miller looked. He had nothing and Bisping knew it.

Where are they now…
John Dodson: The Magician is 31 and most recently beat Manny Gamburyan. His only two UFC losses have come at the hands of the best fighter in the world, Demetrious Johnson. He will be a champion some day, assuming DJ gets hit by a commuter bus, google willing…

Diego Brandao: DB is 28 and most recently lost to Brian Ortega by triangle choke at UFC 195. Since then, he’s been cut by the UFC stemming from the aforementioned Assault and Battery charges.

Michael Bisping: The Count is on a three fight winning streak including his most recent decision win over Anderson Silva, in which he was nearly KO’d in the third round. A perennial gate keeper, at 37, there’s not much time left to make a run, but he’s getting there.

Summary: This season was actually pretty good. A few really talented guys emerged, including a champion in TJ Dillashaw, as short lived as his reign was. Miller’s antics were splendid and Bisping played the heel character perfectly. This is one season that you may consider rewatching, especially the finale.