There are a lot of big comic book movies coming out in 2017. Lego Batman, Logan, Wonder Woman, Justice League, Guardians of the Galaxy 2, another Spider-Man and another Thor are all on the docket, and – ever the pessimistic sort – I’d venture to guess that at least half of them are going to suck royally.

I’ve already outlined the fundamental problem with comic book movies, but since they are the only types of movies that seem to make any kind of money in the post-Putlocker era, I suppose Hollywood’s going to keep on crapping them out, regardless.

And it’s a real shame, too, since there actually are quite a number of great licenses out there that could result in superior, genre-transcendent “comic movies” a’la Spider-Man 2 and Persepolis. While the rest of America gets ready to chow down on yet another reheated serving of Batman, Superman and whatever’s left of the X-Men franchise, I’d like to shine a spotlight on ten unorthodox comic I.P.’s I believe would make for some awesome big-screen adaptations – although, Hollywood being the stubborn turds they are, we’re almost certain to never actually witness them.

Yeah, it sounds like something out of Robot Chicken, but believe it and not, it actually happened as a real one-shot crossover special in the mid-90s. The comic itself was actually surprisingly well-done, with the regulars from the Archie-verse remaining 100 percent in character despite the fact that comic-dom’s most famous, itchy trigger-fingered vigilante had just shown up in Riverdale out of the blue one day (for those seeking context, Frank Castle was on the trail of a drug dealer who bore an uncanny resemblance to Archie – lots of Ernest Goes to Jail mistaken identity tomfoolery ensued.) I could see the comic working very well as a The Brady Bunch/Josie and the Pussycats style satire, and since the material doesn’t call for a deluge of special effects, that means the producers can actually focus on making the script witty and funny. And hey, if it’s successful at the box office, we might just get ourselves a follow-up crossover with Predator… 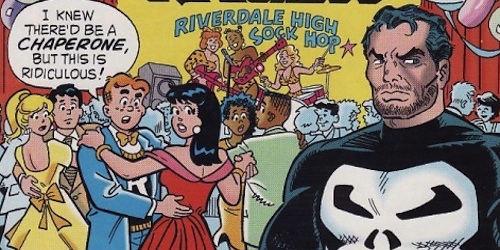 From Garth Ennis – the same guy who gave us Preacher and Hellblazer – comes this sadly overlooked late 1990s series. Hitman – which took place in Gotham City – followed the exploits of Tommy Monaghan, a telepathic assassin whose specialty was offing the kind of super-powered sorts Bats and Supes usually tangoed with. While the material seems pretty standard, the dark, absurdist humor really carried the title a long ways – for example, in one issue Monaghan and pals had to fight off an entire aquarium filled with undead critters, while the “regular” Monaghan rogues gallery including foes such as The Defenestrator – a guy who carried window panes with him everywhere he went – and Dogwelder, who … well, welded dogs on people. Imagine Suicide Squad merged with Deadpool, only with the self-reflexive humor and irritating jump cuts replaced by hard R gore and a halfway decent crime noir storyline, and you can see why this one would make such an awesome cinematic foray. 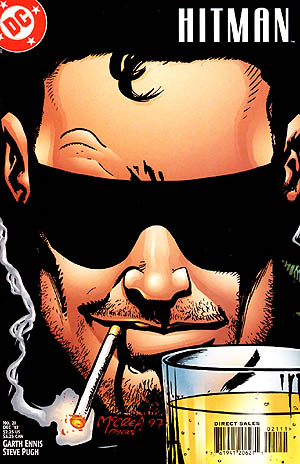 Now this is just a brilliant idea for a movie. Mark Waid’s late 2000s/early 2010s series gave us the Superman story arc D.C. never had the huevos con chorizos to give us – one in which the Man of Steel finally goes psycho and decides to become humanity’s destroyer instead of its savior. Thus far, no one has really attempted a superhero film quite like Irredeemable – a sorta’ psychological study of how good slowly turns evil, with a ragtag group of heroes spending more time running for their own lives than getting involved in C.G.I. laden donnybrooks. It certainly has all the makings of a visually appealing little popcorn movie; it’s dark, semi-philosophical commentary on classical, comic book Manichaeism, however, could also elevate this one above being an entertaining genre outing and into the realm of legitimately great cinema. 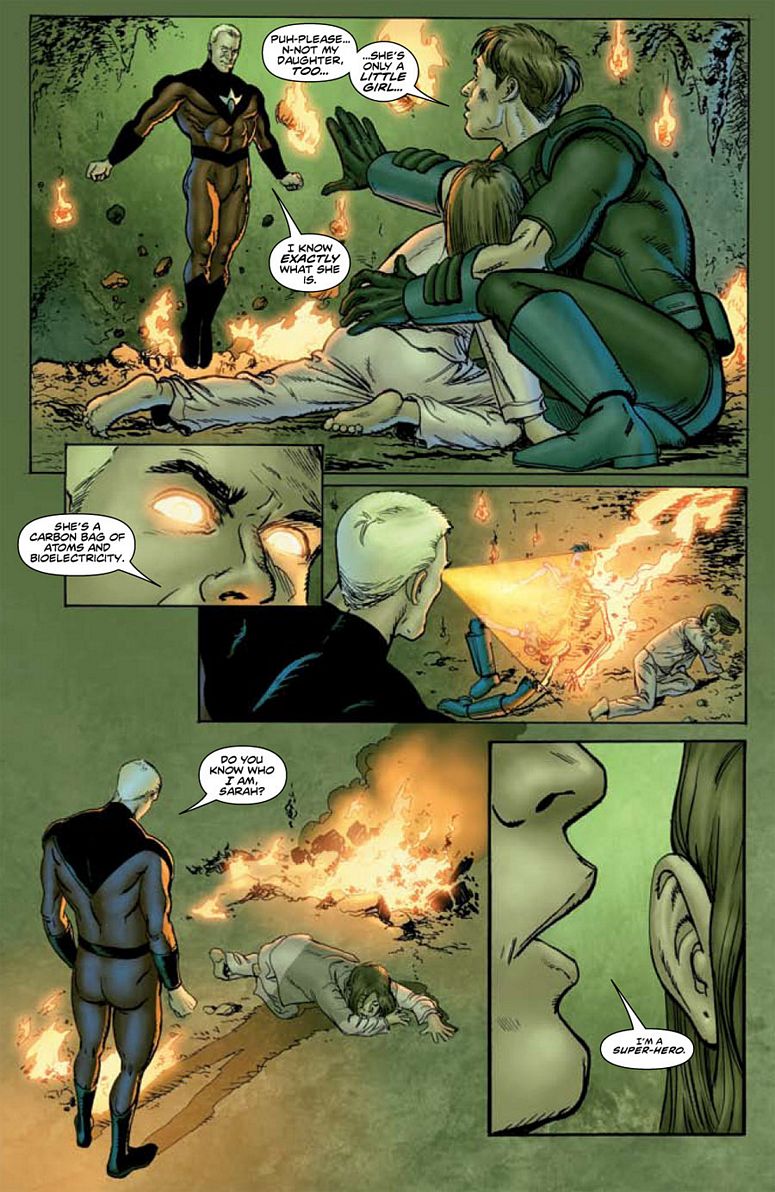 Well, the title alone tells you what to expect here. From indie-goth darling Jhonen Vasquez, JTHM could play out sort of like a Tim Burton directed Scott Pilgrim – albeit, with enough blood and guts to stock the next six Takashi Miike movies. Yes, there is a lot of gore and dismemberment in the comic, but in the capable hands of somebody like Spring Breakers director Harmony Korine, the I.P. could blossom into something beyond the merely aesthetic (unlike 300 or Sin City) and actually tell a unique – if not oddly moving – yarn about loneliness and societal alienation. Hell, it’d beat a live-action Invader Zim, for damn sure. 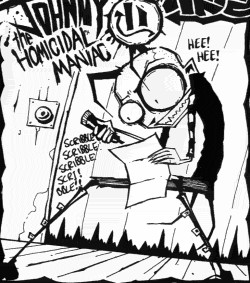 Now here’s one only the most hardcore of the hardcore remember. A short-lived D.C. series in the late 1990s, Major Bummer focused on a stereotypical slacker who – thanks to an intergalactic clerical error – winds up accidentally receiving alien super powers. The catch is, he really has no intentions of using his newfound abilities to thwart crime, and he only becomes interested in vigilantism after a group of misfit cosplayers recruit him for a secret war against interstellar invaders. This is just fun, fun stuff, and the perfect R-rated follow-up to cash in on the success of Deadpool. 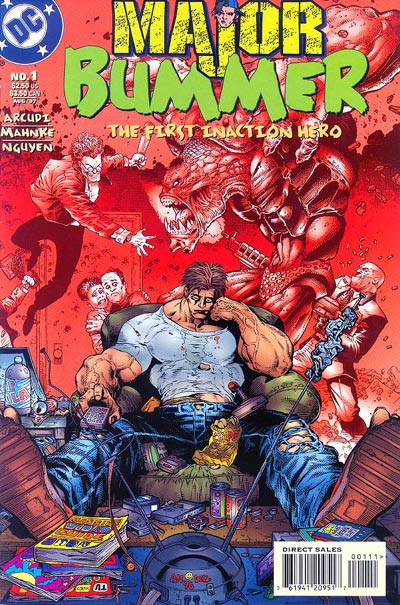 Yeah, how to explain Evan Dorkin’s infamous indie comic – basically, it’s about this duo of anthropomorphic foodstuffs that get piss drunk and run around causing extreme violence and destruction. And that’s about it. Imagine, if you will, your standard Aqua Teen episode in real-life … and given full permission to trudge in NC-17 territory … and you see why this ‘un would make for such an, uh, interesting moviegoing experience. 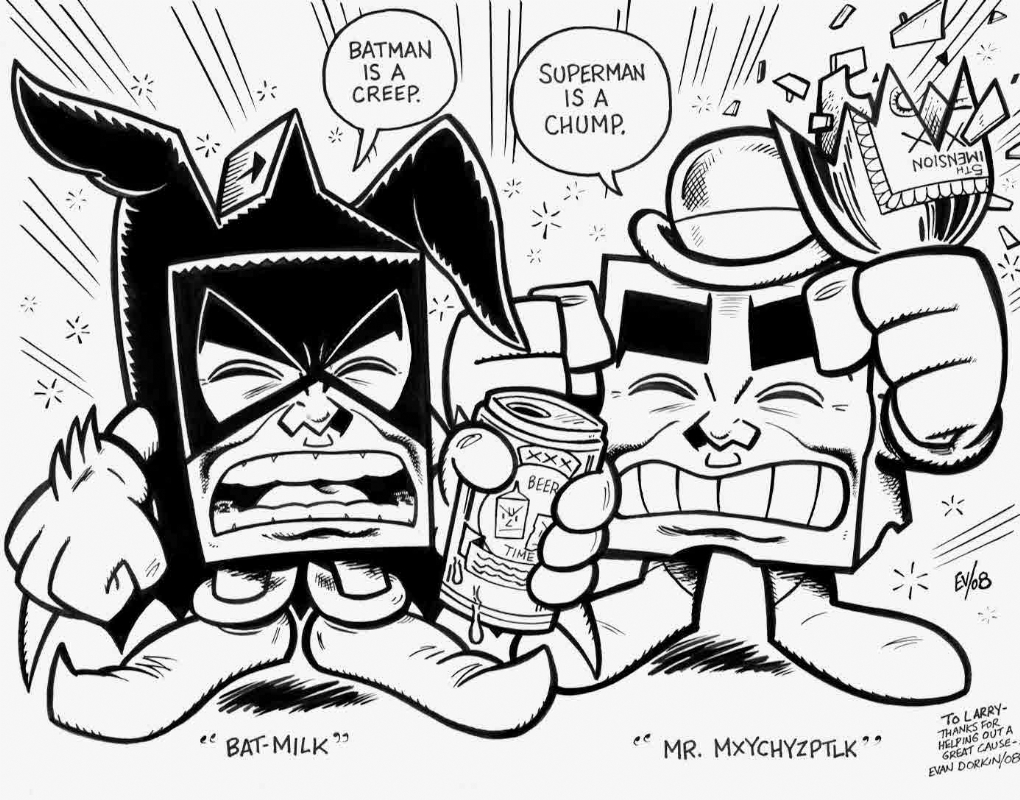 Here’s another quirky ‘90s holdover that, if nothing else, has the visual qualities that would make for a halfway awesome live-action feature. Essentially, S.C.U.D. takes place in a world where you can literally buy assassins out of vending machines. One day, one of these use-once-and-destroy hitmen becomes sentient and soon realizes that as soon as his intended target croaks, he’s going to go ka-blooey. So what does that mean, for you, prospective filmgoer? It means you get to watch a smart-ass robotic killing machine take on all kinds of odd jobs to pay off his victim’s hospital bills. Hey, it made for a pretty solid video game on the Sega Saturn, at least.

Now this is what Batman v. Superman SHOULD’VE been like. Mark Millar’s 2003 opus gives us an amazing alternate reality yarn in which Kal-El crash lands not in the American heartland, but deep in Soviet territory at the height of the Cold War. With Supes now fighting for Stalin, socialism and the expansion of the Warsaw Pact, America’s only hope for redemption resides in the maniacal musings of mad scientist Lex Luthor, who leaves no stone unturned in his lofty quest to defeat the Ruskie of Steel. What follows is arguably the greatest all-star D.C. comics throwdown ever, with cameos galore from the likes of Wonder Woman, Batman and an entire armada of Green Lanterns, plus a downright stellar gauntlet of villains running the gamut from Bizarro to Brainiac to the Atomic Skull. 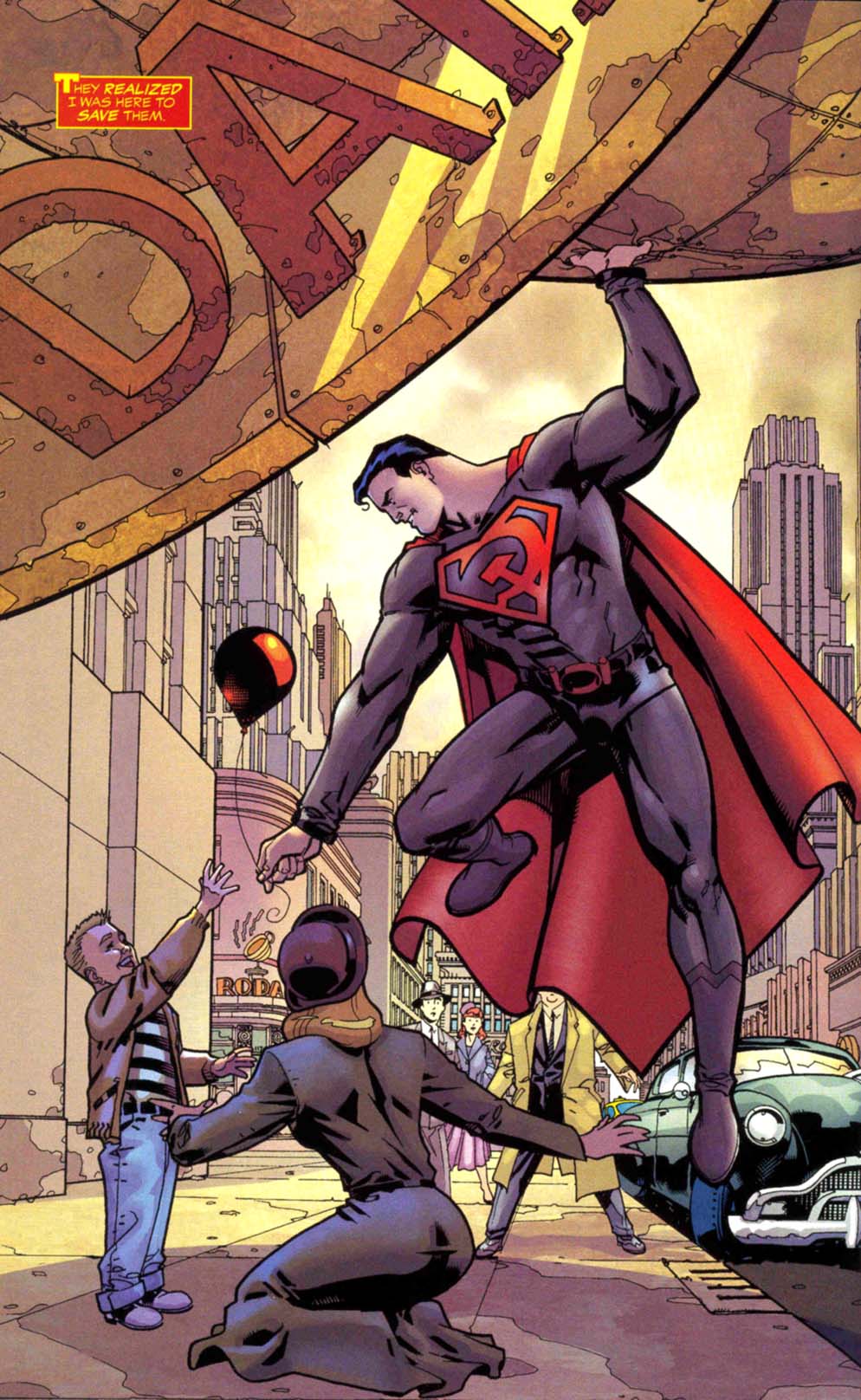 There’s really not a whole lot to commemorate regarding fly-by-night’ 90s imprint Malibu Comics – you know, the guys who gave us Prime and something called The Ferret. While pretty much everything the company did has been (deservedly) forgotten by history, Malibu did manage to churn out at least one good I.P. – the gritty, grimey and goopy Sludge, which followed the exploits of a corrupt NYPD officer who was literally transformed into a pile of sentient sewage. Granted, it’s still a comic about a mutated piece of actual doodoo living among the homeless and fighting vampires and dudes with pumpkins for heads, but with just the right amount of screenplay finesse, this thing could be turned into the half-exploitational, half-sincere tragicomedy Spawn wished it could’ve been. 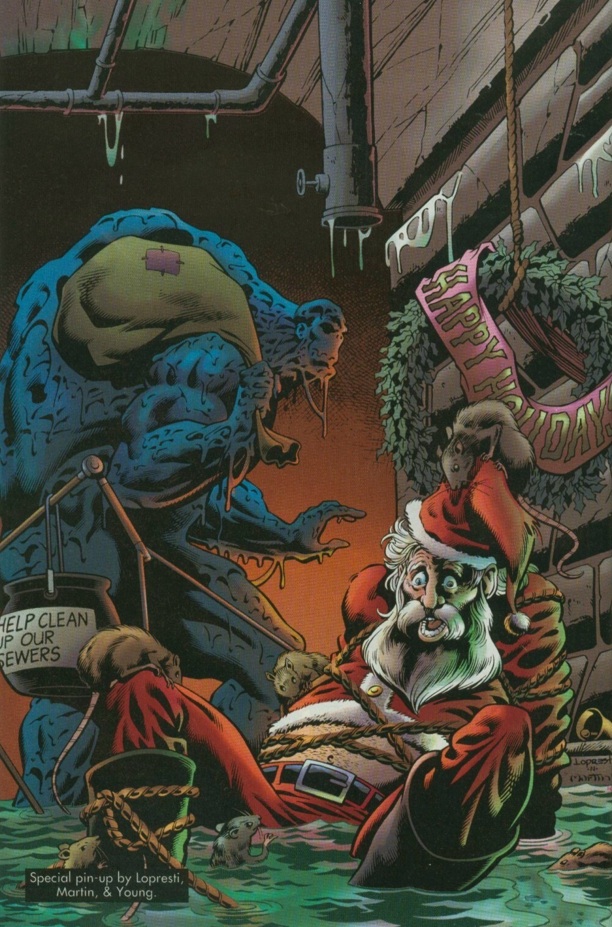 Considering how much influence the iconic 1986 Frank Miller series has had on the live-action Batman movies, one has to wonder how come Warner Brothers never said to hell with it and just went on ahead and made a full-fledged TDKR live-action adaptation. This one pretty much sells itself, folks; bring in Michael Keaton to reprise his role as the Caped Crusader, hire Tim Curry to play the most flamboyant Joker of all-time and get Justin Bieber or whoever to play Robin (and hey, Brock Lesnar would indeed make a great Mutant Leader, now that you mention it) drop the directing duties in the hand of a real director (my first pick is RoboCop auteur Paul Verhoeven) and voila – it’s practically a license to print money. 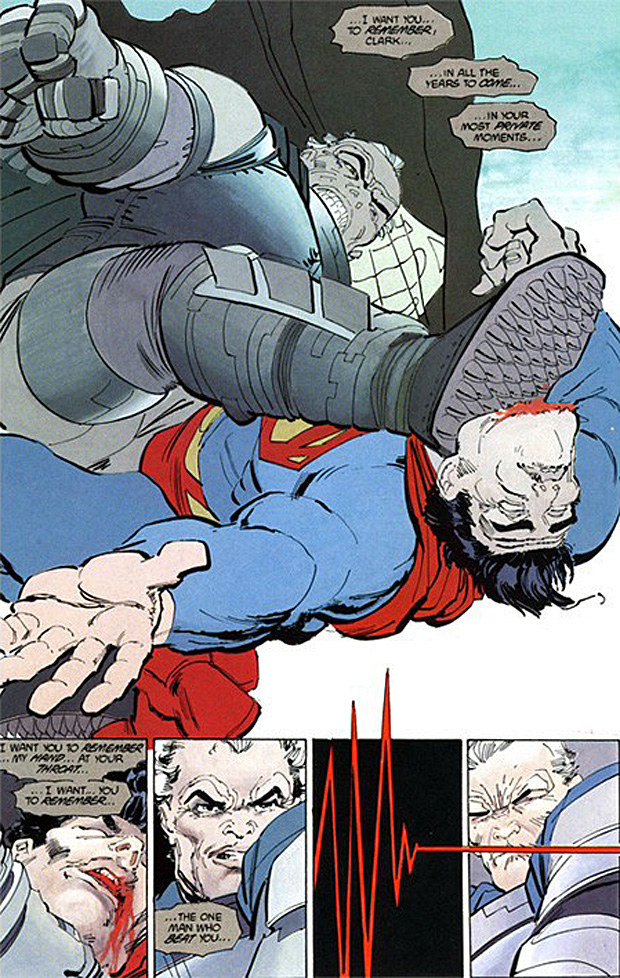