The Ballad of Conor McGregor

With that, Conor McGregor changed the game. No longer just a cocksure Irishman who could cut a promo – a smaller Chael Sonnen basically – he was now leading a revolution. McGregor’s declaration made his career a referendum on Ireland itself.

For all the love Ireland gets – from basically every single American who maybe, once, decades and decades ago, had a surname that began with “Mc” – overlooked is that it is a small country: 5 million people, give or take 9 months after a long weekend of drinking. As such, it’s not as if it dominates all that much on the world stage of sports. The country threw its weight behind Katie Taylor in 2012 as she dominated amateur women’s boxing. Amateur. Women’s. Boxing. A handball in a World Cup qualifier is still a source of consternation.

(This is no knock, as no one would expect Chicago to field competitive teams against nations 50 times its size.)

So for the sports fan in Ireland, to see one of their own – and McGregor is a bona fide Streets of Dublin miscreant – not only fighting in the UFC, but on the precipice of being recognized as the single best on earth, that’s a bit special. And it’s all the more special because McGregor has gladly told his countrymen, “If one of us goes to war, we all go to war.”

Americans have never had this in MMA, and it’s unlikely the country ever will. The nation is simply too big and too dominant at too many sports for that visceral patriotic connection to take hold. Chris Weidman can literally wrap himself in the American flag after beating the greatest fighter of all time over a 4th of July weekend and it’s met with a collective shrug.

Even the Brazilians, who (rightfully) see their country as the birthplace of MMA, don’t have that connection to any specific fighter. Anderson Silva and Vitor Belfort may be popular, but there are basically too many Brazilians good at MMA for it to feel like any single Brazilian victory is proof of the national character.

McGregor, however, has connected so well that he can get thousands of Irish to taunt Jose Aldo – in Portuguese no less – telling the champion that he’s going to die. And when he says he’s leading a revolution, it only helps that a slow trickle of Irish fighters are making UFC debuts, often successfully. In the long run, the odds are against most of them becoming significant players, but right now it simply feels like a movement is afoot.

Oh, and he’s quite, quite good at fighting. He isn’t an artificial creation of creative match-making. His 5-0 mark inside the UFC is bolstered by an overall 17-2 career record, with an astonishing 16 finishes – 15 by way of KO or TKO. The lone non-finish of his career came during a fight where he literally tore his ACL and fought the rest of the bout without the proper use of a knee. Knees are important for walking your dog, let alone cage-fighting.

Those five UFC wins weren’t scrubs either: three were/are Top 15 fighters, with Poirier and Holloway Top 5 level talents. It is not an accident that the only men ranked above McGregor are former title challengers. Possessing a level of power rarely seen within the lighter weight classes, McGregor was an inevitable challenger to Aldo.

Except it’s now Mendes. Does it matter to McGregor? Is he going to be any less sure of himself? Any less verbose? He is who he is: an Irishman who throws grenades for punches and moves in and out of range with ease like he has a tape measurer only he can see.

On Saturday – or Sunday for the Irish watching him in the middle of the night – McGregor will have his chance. Kind of. A win and he’s champion. Interim champion – which is like driving a car while the instructor controls the wheel. But he will be champion. He will be able to tell the world “I challenged the champion. He refused. And now I have the belt.” Any other interim champion is seen as a placeholder – McGregor will easily convince the world that he’s the real champion, not the guy who held the belt for six years. 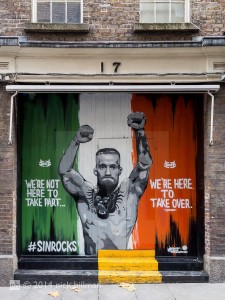