Welcome to the best UFC 196 coverage that has ever happened. Fact! (Shout out to @KiddWWE he’s reading it live here; get well buddy, see ya soon)

Tonight we have UFC 196 FREE LIVE STREAM of (un)consciousness RESULTS right here. That should be kind of obvious, one would think. I know, we all wish we could WATCH UFC 196 FOR FREE but this is the next best thing. As we do, the QUICK & DIRTY results are at the bottom. And, in addition to Mike popping in here and there, we’ll be having a MYSTERY PBP MAN! (It’s Peach… (editor’s note: Uh fucking spoiler alert, Mike?))(Mike is manning Twitter while at a bar to try something new – plus, Peach knows more anyways.)  Again, I know you wish you could watch UFC 196 for free but this is still fucking awesome.

And to think, it’s all because Nate Diaz went FULL DIAZ and ranted on Big Fox. And then said Conor McGregor uses steroids. Lies can get you far in this world. Just ask Donnie Trump, or any Republican. (editor’s note: Peach, keep the goddam political commentary to yourself!)

Ishihara got the better of the exchanges and Juicy J never really found his groove. Ishihara 10-9

Ishihara’s style can only be described as wonky. He threw crazy shots from bizarre angles and at 34 seconds of round 2, he connected and KO’d Juicy J.

Yes, Ishihara’s bizarre attacks and weird exchanges are worth watching and it didn’t last long. Believe me, I’m not going to steer you wrong. I hate sitting through horrible fights. Skip the interview for sure. Rogan asked a question and he just answered something else through an interpreter.

Saggo is a Royler Gracie black belt, which means siiiiiiiiiiiiiiiiiiiiiiiiiiick. As soon as Saggo touched Salas, he got a hold of a leg and got the fight to the mat using an Omo-Plata sweep. Then Saggo got his back and it was a ground and pound stoppage (TKO) at 4 minutes and 34 seconds of the first round.

Fuck ya! If you like BJJ as much as you like just the first two letters, you’re going to love it. If you don’t like BJJ, one, kill yourself, two skip it and the interview.

Round one was all Diego grinding Miller on the mat. It was exactly the first round you would expect from these two. Sanchez 10-9

Round two was AWESOME! Miller landed a kick to the mouth that woke Diego Sanchez the fuck up and he started unloading. Miller got the better of the exchanges and ended up on top and nearly had a front choke. Miller 10-9

Round three was more of round two. Sanchez can be seen chomping on his mouth piece and wading in, expecting to be tagged. He’s a FIGHTER! So is Miller but he looks tired. I’ve got Sanchez through the first half. He looks much better back up at 155. Pretty much what you’d expect from these two, Sanchez won the final moments and I’ve got 10-9 Sanchez for the final score of 29-28 for Sanchez. We will see…

They went the distance. It was all Darren Elkins pushing forward and grinding out a snoozer. The best part was at the end of the match as Goldberg threw it to commercial, and I guess Rogan thought his mic was off, or didn’t care, and said, “goddam…” then cleared his throat like he just took a big bong rip. Which by the way, I was doing, so I missed most of the match.

Probably not. Darren Elkins typically has shit bomb matches and this sounded like another lay and pray fest, although he did win with a 10-8 so he probably beat the fuck out of of Skelly at least for a while. I stand by my no.

Pretty good first round that I’d give to Guimaraes 10-9.

None of that mattered because holy fuck cock! What a finish! Miranda uncorked a head kick and followed it up with precision strikes to get the TKO at 1 minute and 9 seconds of round 2! Amazing stuff here.

Eff to the Yesssss! Skip the first round and SKIP THE PROMO!

That round was awesome! Taleb’s facials were amazing. The unique offense of Silva was enthralling. The action was intense and there was an awesome heel maneuver by Silva who offered a mid round glove touch off a good exchange, dirty pooled him and took a wild crack at him which missed but seemed to piss off Taleb. Taleb made a style choice to tuck his short shorts up even shorter. That was interesting. Silva barely 10-9

MY FUCKING GOD! Destruction unleashed by Taleb who drilled Silva in the top of head which completely KO’d Silva. He landed one shot of ground and pound which was not needed. Nordine Taleb wins by KO at some small amount of time into round two.

INDEED! The first round was sweet and the KO was highlight reel. And… you SHOULD watch the interview… just so you pathetic Americans can be embarrassed by a French- Canadian professional fighter speaking the English language better than any of us… “Cooter, come here a minute… No you come here a minute!”

This was a fucking sweet ass balls dick fight. The first round was a great mix up of, oh I don’t know, martial arts? It was even but maybe an edge to Thatch 10-9.

Round two was Bahadurzada lighting Thatch up and I think pretty easily won round two. Bahadurzada 10-9

Toss the scores out the window because Bahadurzada submitted Thatch with an arm triangle at 4 minutes 11 seconds of round three.

If you like wars, you’ll enjoy this match. I felt bad for Thatch because he had points where he showed some brilliance but it wasn’t enough tonight. Skip the interview.

My goodness, this is the best #UFC196 coverage ever. 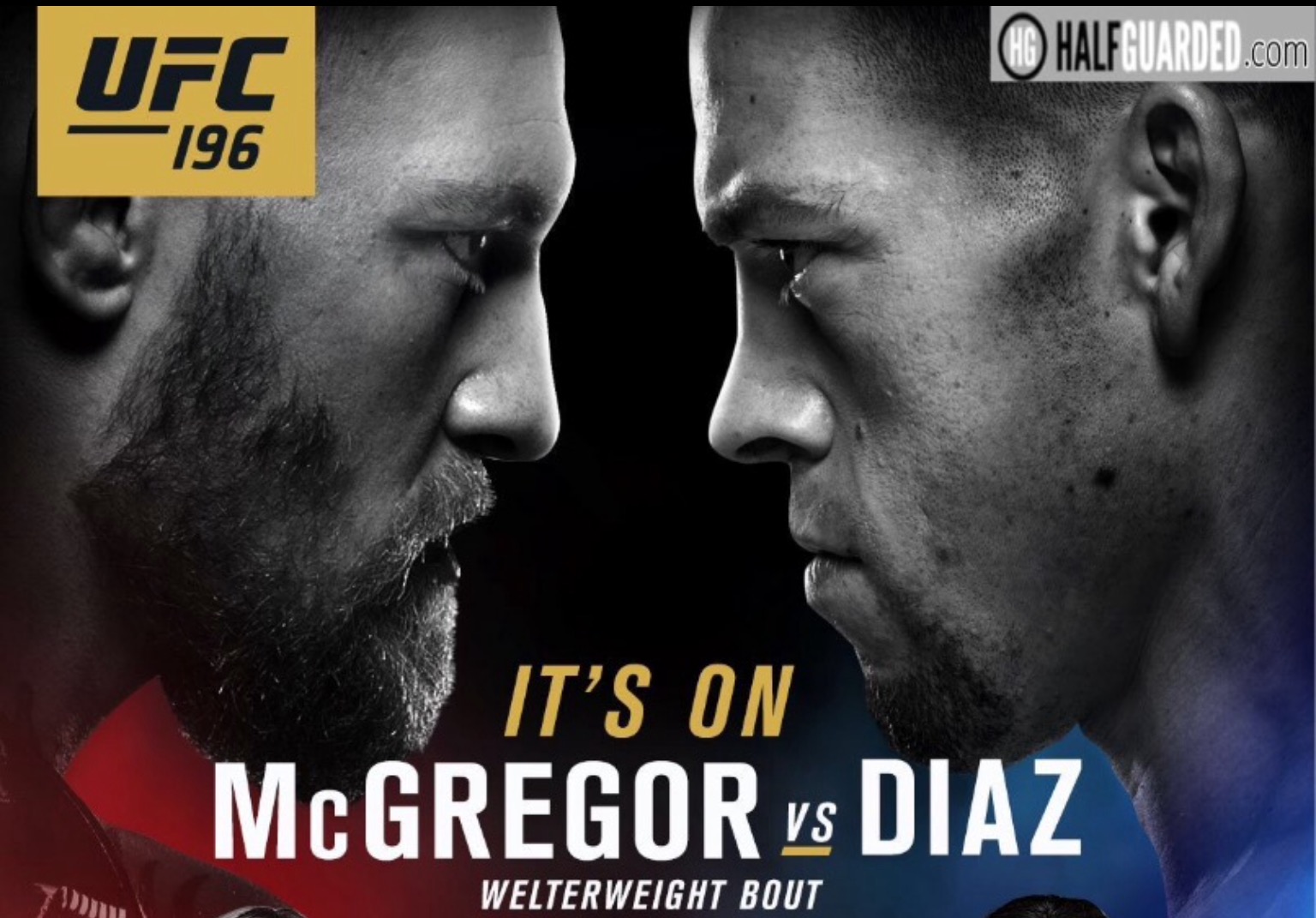 Nunes apparently believes that punching the knee is an effective game plan. Why? Because Bendo did it? It never did shit for him either except make it look he missed a back spin break dancing. Round one suuuuuucked. 10-9 nobody

Round two was all Nunes beating the ever living fuck out of her until getting her back and choking the shit out of her the entire round. Shevchenko is as tough as a kick in the cunt. (editor’s note: Mike, am I pouring it on too much?) Gotta be a 10-8 for Nunes.

Round three was the reverse with Shevchenko dishing out a beatin’ on the ground for the first two minutes. Then it was all Shevchenko standing. This was a dang good match after all. Nunes 10-9

Oh mama you gotta watch this! Hot stuff coming through! Shevchenko is a warrior, but Nunes got the better of her tonight. Skip round 1.

Filthy Tom rocked Anderson and looked for the finish early but couldn’t get it. 10-9 Lawlor

Did I mention Lawlor walked out to Madonna’s Like a Prayer? It was awesome. Good exchange to end the round. This is gonna be tough to call. I’m hoping it’s Lawlor because I bet him, but I guarantee every judge gave it to Anderson 10-9.

Lawlor got taken down and ridden for a long time. Anderson used superior wrestling to dominate the first half of the round. Lawlor did nothing. Given that I’m sure every judge gave Anderson round two just because it was close and Lawlor won round one, Lawlor lost 29-28 because this round was an easy Anderson 10-9.

Sorry Filthy Tom. That fight was garbage. You fought valiantly, but not watch worthy. I commend you, young Lionheart. You’ve got the heart of a lion, and the body, of a heart. Or something.

It looked like Latifi rocked him but Villante escaped. Latifi put a lot of pressure on him and won the round 10-9. Latifi 10-9

One thing is for sure, Latifi spent a lot of time tanning in preparation for this match. So far it’s working. Villanti is like an ineffective terminator. Latifi launched Villante with a German suplex. That was radical! Latifi uncorked a couple of brutal spin kicks. Latifi is up two rounds to none. Latifi 10-9 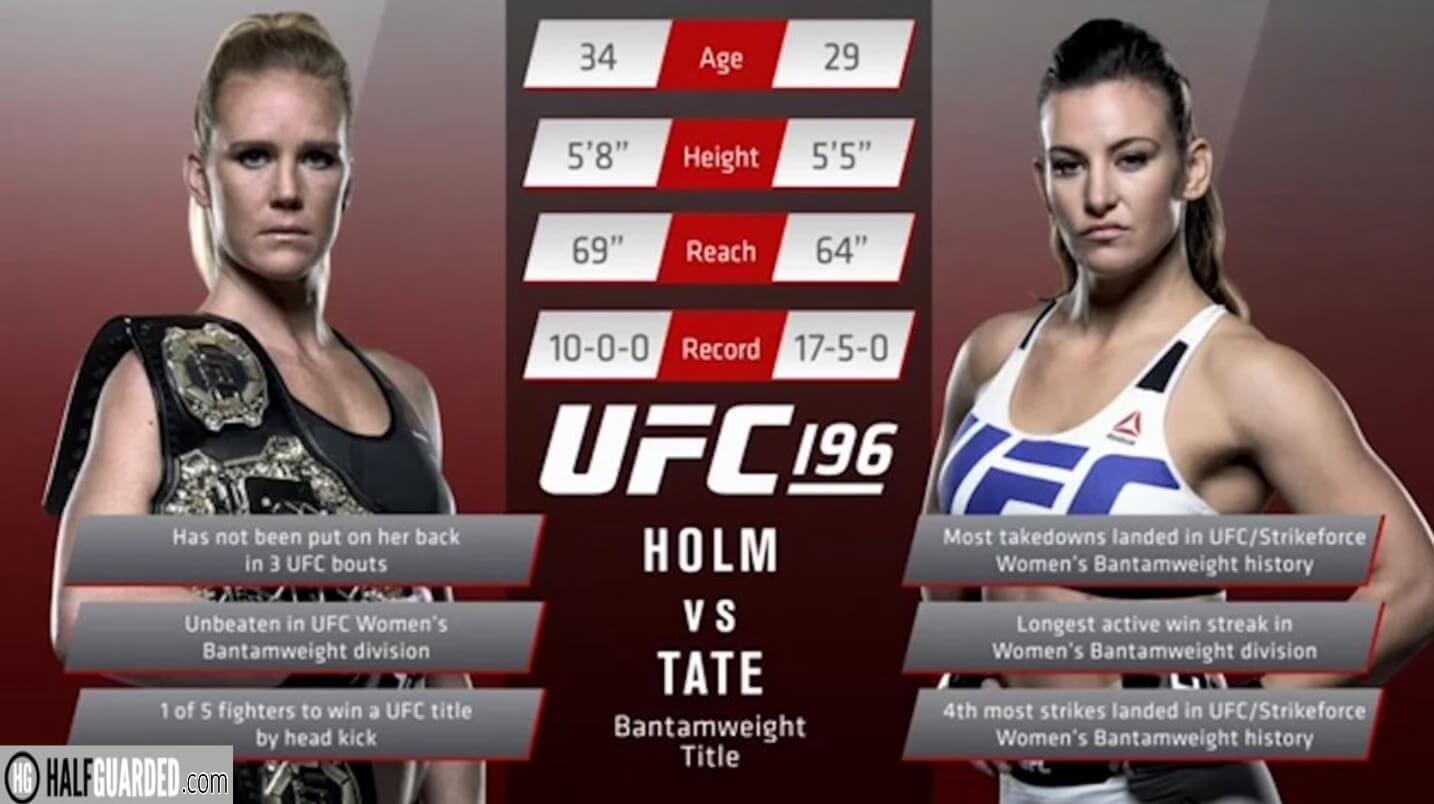 Holm walked out to some just brutal accordion music, as if I needed another reason to hate the queen of the harpies. Ya, that’s what I call her. It was clear early that Miesha was out of her league striking, yet she chose to strike. I just don’t get it. Holm easy 10-9

Tate got the takedown early and got some decent ground and pound shots in. Tate took her back with 90 seconds left. Holly barely survived the rear naked attempts. That was close. A 10-8 for Tate in my book but I doubt the judges see it that way. Tate 10-8

The fourth round was all Holm, as she appeared to find her grove with strikes and Tate couldn’t get the take down. Holm 10-9

Holm lit her up with kicks early. I got Holm winning rounds 1, 3, and 4, and I gave Tate a 10-8 round 2. So that’s a 38-37 score for Holm thus far, BUT WAIT… Tate got a take down and got the back! Holm got to her feet and Tate hooked in the rear naked choke! Holm attempted to throw her off but Tate held on like a savage and HOLM GOES TO SLEEP! NEW CHAMPION MIESHA “CUPCAKE” TATE!

Official Result: Miesha Tate wins by submission at 3 minutes 30 seconds of the 5th round! 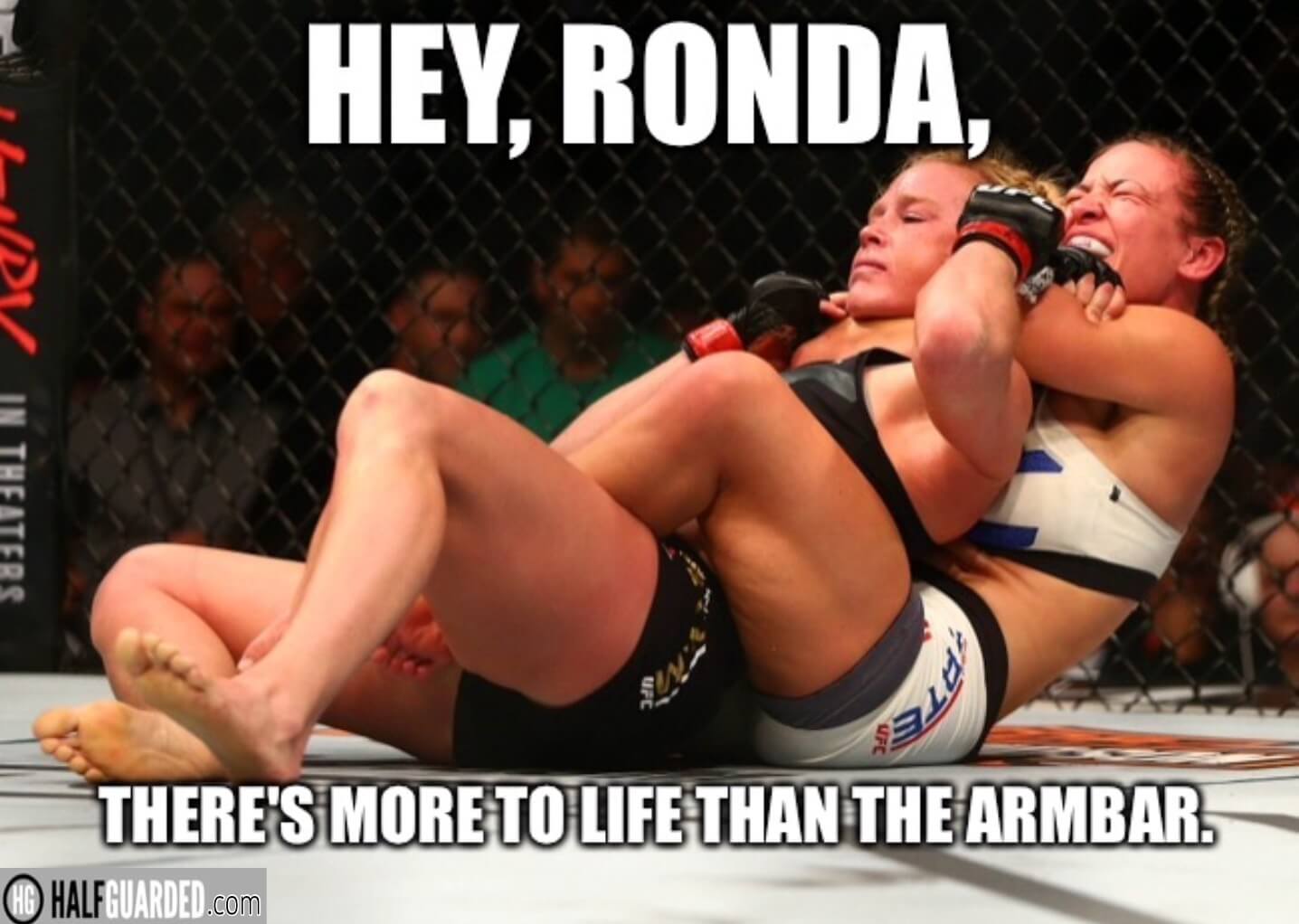 Conor probably got the best of the striking exchanges but Diaz hung tough. Diaz got him down towards the end of the round but didn’t do anything with it. McGregor 10-9

Conor was cut. Diaz looked like he was a man waiting to be KO’d for much of this round. Diaz was bleeding badly too. HOLY FUCKING SHIT! DIAZ ROCKED HIM! STOCKTON SLAP! McGregor is in trouble! Unbeleivable! McGregor fires back, and Diaz returned fire, and McGregor dove for the take down, the champ is hurt, and Diaz has mount and beats reigns down terror on McGregor who gives up his back and Diaz sinks in the choke! McGregor taps out and DIAZ WINS!

Official Result: Nate Diaz by submission at FOUR FUCKING TWENTY of round 2!

DUH!!! YES, watch every second of all of this. Diaz said, “I’m the new king of this motherfucker!” Then McGregor put over Diaz and said he’d be back. My buddies and I were running around like mad men so I kind of missed all of the post fight stuff. 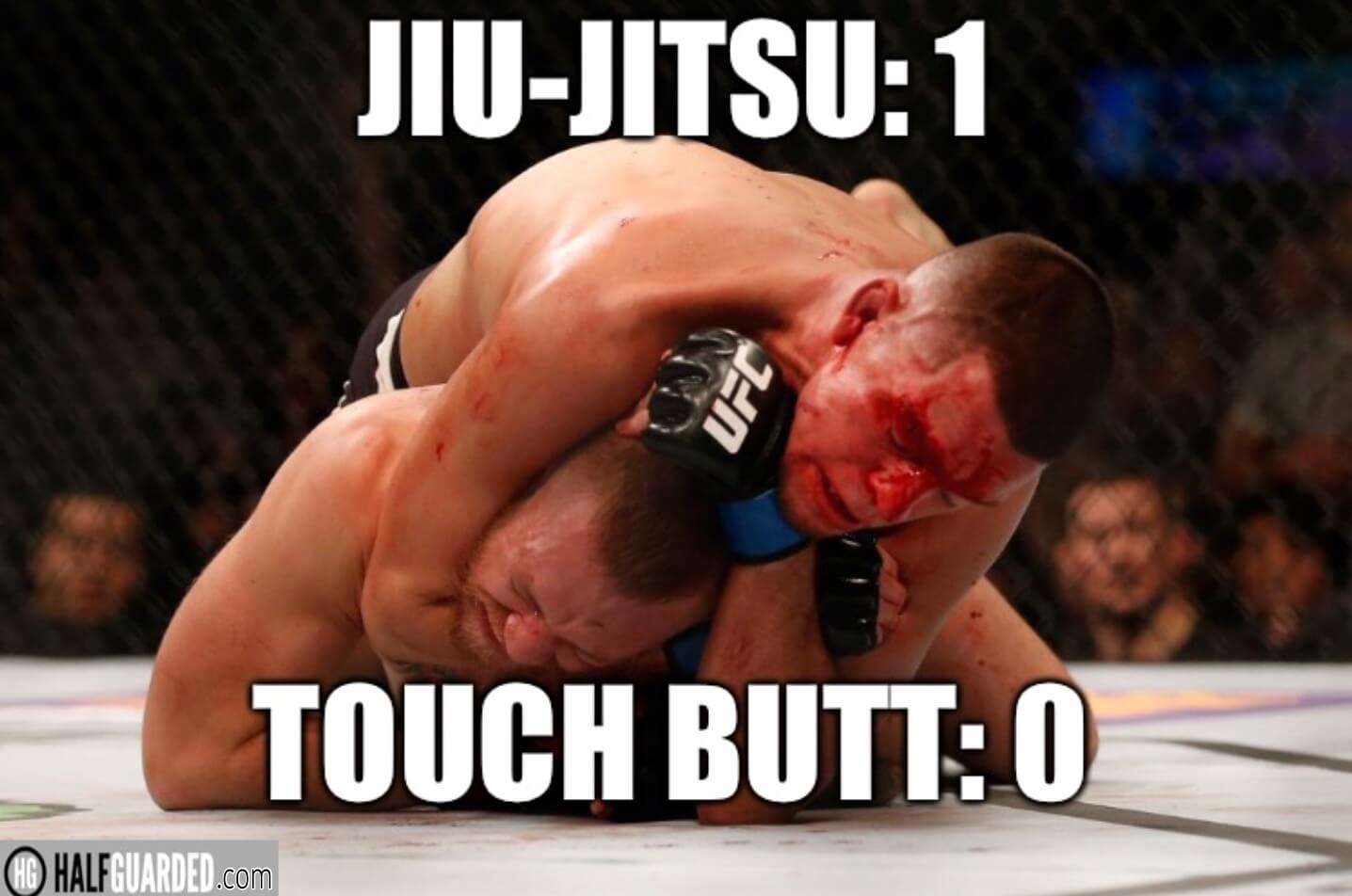 Update 3: James Swift with a brilliant piece on how Conor is defying all logic when it comes to his creating his own weight class.

Update 7: Yet another UFC Embedded piece. (Oh, and here is the first one.)  And UFC 196 workout footage.

Update 8: Why Nate Diaz Fights for Respect; why GSP vs McGregor at UFC 200 must happen.