The inaugural Ultimate Fighting Championship event was little more than an infomercial for Gracie Jiu-Jitsu, featuring dudes who had no idea what they were doing (or even what the rules of the fight were) getting confused and submitted by the runt of the famed Brazilian family. To prove the superiority of their brand of violence over all others, the Gracies wound up putting little Royce in contests against guys who routinely outweighed him by 100 plus pounds (he got off easy there – lest we forget the misfortune of one Keith Hackney, who was once forced to do battle with a dude who outweighed him by four hundred.) Practically EVERY UFC fight up until 1997 or so could rightly be described as a carnival attraction, featuring everything from dudes literally balling themselves up into the fetal position to guys wearing just one boxing glove to Random Task from “Austin Powers” (who is currently serving a life sentence for rape, torture and murder, if you can believe it) tapping out after being mercilessly pounded in the testicles a good dozen or so times.

With the dual rise of weight-classes and fighters like Frank Shamrock, Randy Couture and Tito Ortiz who were legitimate athletes as opposed to beer-bellied ruffians and clueless saps who practiced techniques with abstruse names like “S.A.F.T.A.,” the UFC slowly transitioned into something that could be considered a quasi-legitimate sporting competition. Thankfully, around that same time this little organization in Japan called PRIDE got started up and brought the MMA ludicrous to lofty new heights. In addition to the flashy and glitzy stage shows and quite-possibly-rigged championship contests, the organization routinely trotted out bouts in which lightweight competitors did battle with men who were three times their size, with Fedor Emelianenko fighting some random seven foot-tall plus dude every New Year’s Eve. Over in the Land of the Rising Sun, things would only get weirder after PRIDE went under, with fly-by-night promotions staging fights starring Jose Canseco getting clobbered unconscious and Bob Sapp pounding the crap out of a guy dressed up like a M.U.S.C.L.E. action figure. Even in the post-Zuffa years, the UFC has had a fair number of “spectacle” match-ups as well; who among us could ever forget Kimbo Slice’s illustrious year-long run with the company, or Randy Couture earning the easiest paycheck of his life against championship boxer (and every closed captioning transcriber’s worst nightmare) James Toney?

The UFC may be a multi-billion dollar company with a lot of fancy sponsorships and impressive TV deals, but the same outlandish, sensationalistic plasma that ran through the company’s arteries back in 1993 is still coursing through its veins today. You saw glimmers of that with the meteoric rise and fall of Donkey Kong fighter par excellence Brock Lesnar, Chael Sonnel’s “Monday Night Raw” quality trash talk and all of the kooky shenanigans involving larger-than-life personalities like Mayhem Miller, Alex Caceres and Tom Lawlor. As much as the UFC wants to be a bona-fide, legitimate mainstream sport, it still seems to have a guilty yearning to be an unrepentant, out-there circus spectacular.

Which brings us to the oh-so-curious case of Phil “CM Punk” Brooks. Late last year, the UFC announced that Mr. Brooks — a former WWE World Champion and darling of the so-called “smart mark” Internet wrestling fan base – had signed a deal to compete in the Octagon. While plenty of other fighters with pro wrestling backgrounds have gone on to have quite a bit of success in MMA – in fact, two of them, Bas Rutten and Kazushi Sakuraba, are easily considered among the finest mixed martial artists ever — Punk/Brooks remains an oddity. Yes, Brock Lesnar and Bobby Lashley also transitioned from pro wrestling to MMA fairly well, but those two also were former college wrestling champions. Not only has Punk/Brooks (for simplicity’s sake, we’ll just refer to him as Punk for the rest of the article) never had an amateur MMA fight, he’s never competed in an amateur wrestling, boxing, or kickboxing bout of any kind. For that matter, I’m pretty sure he never wrestled or participated in any sports in high school — hell, we’re not even sure if he’s ever actually been in a real-life schoolyard fight before. Even a dude with no MMA experience like Herschel Walker went into their first pro bouts having some kind of top-tier collegiate or professional sports experience. Meanwhile, the closest Punk has gotten to real-life competition was back when he was a backyard wrestler.

This puts the UFC in a precarious situation. While plenty of pro wrestling fans will tune in to watch Punk’s first MMA contest, his inexperience and age (the dude’s closer to 40 than 30) makes matchmaking extraordinarily difficult. Presumably fighting as a middleweight or welterweight, putting him in the cage against anybody in the top 10 divisional rankings would be akin to a public execution. Even giving him a bout against a winless unknown like Garreth McLellan, Steve Bosse or Oluwale “The Holy War Angel” Bamgbose would be a one-sided mauling. That leaves the UFC, seemingly, with one of two options: giving Punk a catchweight bout against a relatively inexperienced lightweight or featherweight (who doesn’t want to see more Doo Ho Choi or Nazareno Makegarie on television?) or giving him a bout against some wayyyy-past-his prime joke of a fighter (Tank Abbot or Kimo, I assume, are champing at the bit as we speak.) That, or they can just go completely off the rails and book Punk against the Green Power Ranger … go on, keep pretending you wouldn’t order that PPV.

Is there a solution for the CM Punk dilemma that doesn’t involve a mismatch against a real fighter like Cathal Pendred or staging a gloried Celebrity Boxing bout? As bankable as Punk’s name is, it seems a waste to just throw him to the wolves for a one-and-done event … which is why I propose a rather unorthodox solution to the whole matchmaking conundrum. While practically every recognizable male UFC fighter would no doubt manhandle Punk in the cage, how would he fare against the number one women’s fighter on the planet?

Ronda Rousey absolutely OWNS the UFC Women’s Bantamweight division. She’s so dominant, you could watch her last three title defenses back-to-back-to-back and still have a few seconds left before your Minute Rice is finished. This January, she’s probably going to knock Holly Holm’s head clean off her shoulders, then rip her arm out of the socket for use as a croquet mallet. She is undeniably a bad, bad woman – but even as the world’s premiere female mixed martial artist, does she stand a chance against a larger male competitor, even one as inexperienced as Punk?

That’s the million-dollar (and million PPV buy) question every MMA fan in the world would love to see get answered. For that matter, it’s the question every non-MMA fan in the world wants to see answered as well. It could be a crossover, global multimedia event a’la the Battle of the Sexes (for all you whippersnappers, when female tennis star Billie Jean King took on over-the-hill male tennis wash-up Bobby Riggs and won), only amped up times one hundred because it’s a man and a woman going toe-to-toe in a combat sport. It would be the most publicized bout in MMA history – virtually every major media outlet in the world would have to cover it – and as such, it’s a lock for record TV ratings (and pay-per-view buys.) 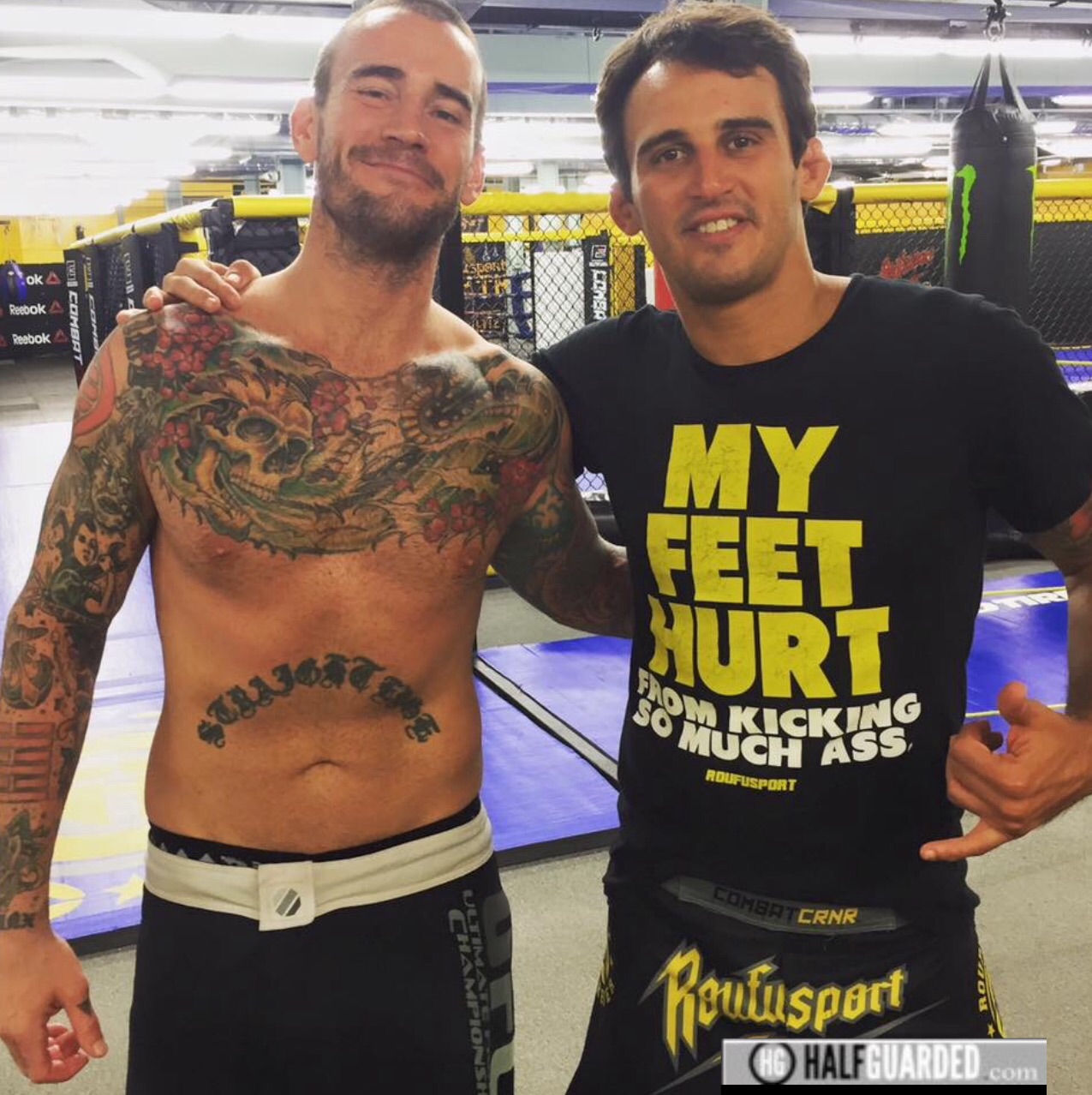 It’s a fight that just wouldn’t work with any other two competitors. As dominant as she’s been in the cage, I can’t think of a single top-tier male MMA fighter in any weight class who would sign on to a bout with Rousey, nor any mid-to-lower tier male MMA combatant who would agree to fight any other female fighter under a Zuffa contract. That said, with a completely untested first-timer like Punk, the ground is certainly more even. He may have the size and theoretical strength advantage, but Rousey has far more technique and experience.

If Rousey wins, it’s a huge girl power victory that could turn thousands, maybe even millions, of women into MMA fans and aspiring fighters. If Punk wins, it automatically makes him the biggest heel in pro sports, and probably as many people who tuned it to see his tilt against Rousey would tune in to see him fight his first male UFC opponent, in the hopes the ex-WWE grappler gets the ever-loving crap knocked out of him. If the apple falls one way, you have a bright new star on your hands. The fruit falls the opposite direction, and your brightest star turns into a supernova-caliber celebrity. No matter the outcome, it’s a win-win for the UFC.

Now, would Dana White and company ink the match-up? Would it get sanctioned by the NSAC? Would it scare off advertisers, fearful that it might turn into a Joey Buttafuoco vs. Chyna fiasco? The technicalities there are sketchy, and it’s not even factoring in issues like which weight class the fight would be held at. Alas, the crossover potential here is just off-the-charts; we’re not just talking about a transcendent moment for mixed martial arts, we’re talking about the single biggest moment in the sport’s history. Sure, it’s an over-the-top proposition. A lot of people may scoff at the notion, and some may even be offended. But even as a colossal train wreck, it could be THE event that transforms MMA from niche attraction to global sensation.

On paper, it doesn’t sound like a fair match-up, but then again, that was the whole point of the UFC even existing in the first place. The reason why little Royce Gracie stepped inside the Octagon against behemoths like Dan Severn was to prove that sheer skill trumped sheer power, and virtually every time David took on Goliath, the giant went down. To some, the idea of CM Punk fighting Ronda Rousey seems like an absolute joke, but ultimately? More than any other match-up I can think of, it embodies the spirit of everything that the sport originally stood for.