Welcome back to TOP TEN TUESDAYS! You know the deal. If not: learn and be happier.

These are the Top Ten Most Overrated Fighters Ever (and we’ll stick with MMA). This list is absolute. It is infallible.

Most overrated anything is an exercise in reading the zeitgeist. There isn’t an official list that is absolute proof of how good fighters are, nor is there even a real list of how the general public views fighters. While I suppose I could ask a prestigious polling company to run a poll for me, then determine if I felt those results were correct, that would cost a lot of money and I kinda feel like the folks at Gallup would be really confused at the request. 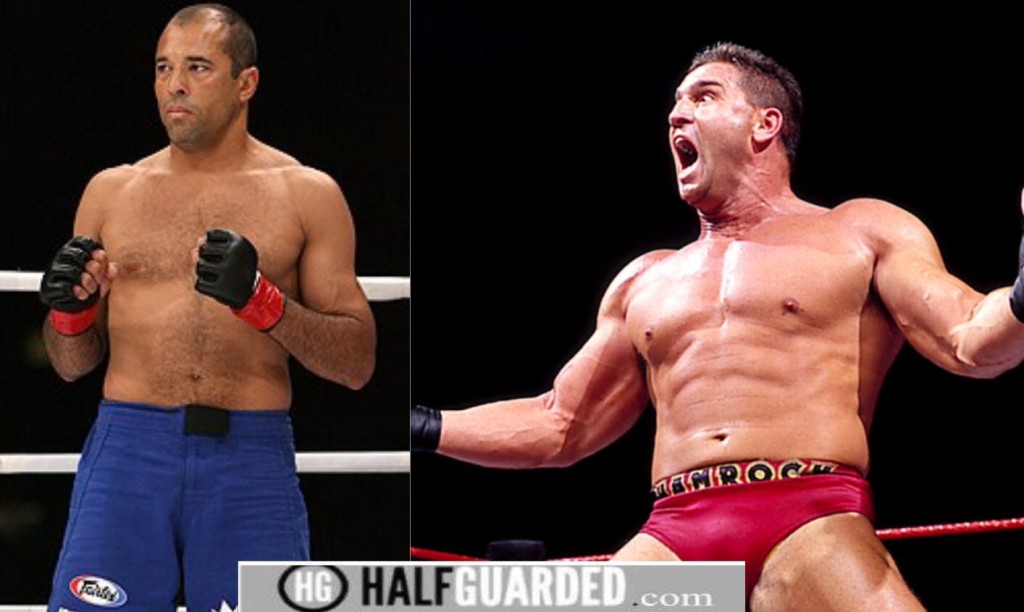 I list them because of their mainstream appeal to this day. Gracie in particular shows the importance of being an early adopter (or whatever the business term is). Frankly, in their day, both actually were amongst the better fighters, but they make the list because their legend persists to this day. You talk to your average fan and Royce’s name still is revered. In reality, his BJJ wasn’t even great by the standards of the mid-90s. Royce gets to be less overrated than Ken because he actually beat Ken.

He’s a victim of being dominant when no one knew better – kind of like Ken and Royce. For years, people were convinced he was a top 5 pound-for-pound great and that he was the unchallenged greatest 135 lb fighter. In reality, once more attention was finally given to the division, and more fighters actually dropped to the class (rather than try to make a go of it at 155) he got exposed quickly. He was hardly ever a bad fighter but the love he’d get where some thought he was the best on earth was shown as stupid. (Admit it: you didn’t see this one coming.  THIS IS WHY I AM POPE!)

One of the few active, in their prime, competitors on this last, Cyborg isn’t very good. Her most impressive win was over Gina Carano, herself hardly a great fighter so much as a “right time right place” fighter. Cyborg‘s career has been made on her being bigger than everyone she fights, looking scary, and beating up women who have zero business probably fighting on any kind of big stage, let alone fighting Cyborg. Juiced up steroid users who beat up people who probably work at Target 9-5 aren’t exactly great fighters.

Tito was a good fighter. Tito was never a great fighter. But for a time he was the face of the UFC and his having the most consecutive title defenses at light heavyweight is decidedly less impressive when realizing that they included middleweight (and tragically awesome) Evan Tanner, Elvis Sinosic, and Ken Shamrock. His years of blatantly ducking Chuck Liddell only highlighted further his tenuous grasp as being champion. Once he regularly fought top level fighters, he stopped winning. At one point he went six years with only one win.

In many ways, Rickson was the Tito of his day. Just with a family mouthpieces proclaiming his greatness. As a fighter, yes, he was undefeated. But it isn’t just that he fought poor competition (that was the era) it’s that for a guy who was supposed to be this BJJ wizard he struggled far too much in beating them. The awe his name was spoken of in grappling circles made it seem like Jesus himself (when he wasn’t hating on Anderson Silva) was throwing up triangles. In reality, he looked tentative in the ring, desperate to avoid a mistake – and again, this was an era when no one knew BJJ anyways. Royce was winning using BJJ at roughly the same time, and he wasn’t even that great at the sport. Rickson was supposed to be the Babe Ruth of BJJ but he looked like he was afraid of getting hit by a fastball.

There’s a chance (a small one) that “The Reem” will represent the last time the world buys into the farce that is non-regulated competition. Overeem gained 50 lbs of horse-laced muscle and beat up a bunch of crappy fighters in MMA, and used his absurd size to hide behind giant gloves in kickboxing. Somehow, this lead people to believing he wasn’t just good but the true uncrowned greatest heavyweight walking. Travis Browne treated him the way Browne treats his wife and Ben F^%*%(%*$& Rothwell knocked him out in about two minutes. You lose to Rothwell you automatically qualify for garbage.

Now we get to the fun three. In some respects, they’re all the same guy.

Like Tito, he was good. Like Tito, he was never great. Silva had some impressive wins during his PRIDE career (Rampage Jackson being the best) but his was an aura largely built on fraud. He ran through Kazushi Sakuraba, stomping the smaller Japanese fighter to victory. He would do this with Yuki Kondo, Kazuhir Nakamura, Ikuhisa Minowa, Hiromitsu Kanehara, Tatsuta Iwasaki, Kiyoshi Tamura, Alexander Otsuka, and Shungo Oyama. Heck, even his wins over Hidehiko Yoshida were more evidence of Yoshida being good than Silva being great. A guy who had three whole fights almost beat Silva!

Is Silva bad? Of course not. He’s likely a top ten all time light heavyweight but he’s spoken of in many circles as if he’s special beyond belief. That he was this actual Ax Murderer. Reality? Maybe the Rashad Evans of PRIDE.

His career hasn’t been helped as of late when it’s clear he’s gone insane, spouting off about conspiracies, and literally running down the street when drug testers show up.

It’s tough to separate these two. On the one hand, I think Fedor was the significantly better of the two. On the other hand, the talk of him being the greatest fighter ever – not heavyweight but P4P – is stupid.

CroCop was the Wanderlei Silva of heavyweights. With the weirdness that surrounded all three of his fights with Josh Barnett (none of them ever seemed like they were truly the fight we wanted) he didn’t face nor beat great heavyweights. When he did, it was someone like Big Nog: who tapped CroCop with an armbar. Like Silva, those in charge at PRIDE wanted CroCop fighting Japanese men so they could book the “big scary foreigner against local Japanese hero.” Except those Japanese fighters weren’t heroes beyond it being slightly heroic that they gave it their all.

It started when he fought Fujita, a fight he won only because of a cut. Then he drew – DREW – with Nobuhiko Takada. From there: Yuji Nagata (which helped his pro wrestling career), Sakuraba (who was beating CroCop until a single backfist from the guard broke Saku‘s eye), Fujita again, Yoshihisa Yamamoto, Hiromitsu Kanehara, Shungo Oyama (Silva and CroCop probably traded notes on these), Ikuhisa Minowa (come on, now), Hidehiko Yoshida (PRIDE was nothing if not consistent from which aisle they bought their tomato cans).  What was his biggest win? One narrow decision over Josh Barnett? (Bookended by fluke injury wins over the same.) KOing eventually middleweight Wanderlei Silva? CroCrop in PRIDE made for great highlight videos but not great wins.

Then he came to the UFC and … sucked. The KO loss to Gonzaga. The 15 minute owning by Cheick Kongo. And *poof* he was gone, where he’d return to Japan, get kneed in the balls a lot by Overeem, fight nobodies, then return to the UFC to get KOd by Junior dos Santos, Frank Mir, Roy Nelson, and Brendan Schaub. Schaub KOd CroCop. The same Brendan Schaub who was recently ripped on air by Joe Rogan, being told he sucked so bad he needed to retire.

And he beat CroCop.

Then there is Fedor. He’s better than CroCop. He beat Nog several times. He legitimately didn’t lose for many years. He also had stretches where he’d get fights like this:

(Curiously…) like many who came to a regulated environment, Fedor physically looked a little softer (and he already looked like a violent teddy bear) and promptly lost a lot. Three in a row, all finishes, with Werdum tapping him in a minute, Bigfoot Silva finishing him in ten minutes, and MIDDLEWEIGHT DAN HENDERSON KOing him in under five minutes.

Fighters get old. This happens. They have bad losses at the end of their career. That’s fine. That happens. The greatest of all time should not be beaten in the manner he was. With Fedor, it’s simply the hype. Like CroCop and Silva, he was more hype than reality. Which is sad because the reality of Fedor is that he was very good and was almost assuredly the best heavyweight on earth for a time. That’s an amazing accomplishment. That should have been enough. He was Derek Jeter not Babe Ruth; Muhammad Ali not Sugar Ray Robinson; great but not the greatest.

Read more about why the UFC shouldn’t bother signing Fedor.

But too many people – and I’ll say it: people whose agenda was to try to undermine the UFC – wanted and needed guys like Silva, CroCop, and Fedor to be the true best in their minds so the UFC would lose credibility. It happened again with Overeem and is happening now with Lady Cyborg.

Time has shown the truth though: These are the Top Ten Most Overrated Fighters Ever.

While some get upset about a list written by a guy they don’t know, they should be upset and focused on the following:

Macbeth (2015) Trailer for US release has been released